SBI Crypto Investments of Tokyo has purchased 12 percent of Clear Markets of North Carolina as part of its goal of opening a cryptocurrency derivatives trading platform that caters to institutions, according to the Nikkei Asian Review.

The price was not disclosed, but the Nikkei Asian Review estimates the value of the stake to be approximately $9 million.

Financial derivatives are business contracts based on some kind of commodity, that in and of themselves have monetary value and can be traded like assets. One example of a derivative is a futures contract, which is a promise to buy certain goods at a certain price at a certain time. The goods may not actually ever be purchased. Another example is a swap, which is when two businesses exchange the cash that they are making from financial derivatives that they hold.

The value of this market is sometimes estimated to be more than $1 quadrillion, or considerably greater than the gross domestic product of the entire world combined, according to Investopedia.

Bitcoin was first used as a basis for futures contracts in December last year in Chicago. These contracts were offered with more restrictions than is usual, because Bitcoin has a very unstable price.

According to an SBI Crypto Investments presentation, its aim is to “build a platform that will allow institutional investors to smoothly trade these instruments [derivatives based on digital currencies].” Clear Markets will provide an online swap trading system to this end.

In June 2018, SBI Crypto Investment invested in Potamus Holdings of Boston. Potamus Holdings is the parent company of a trading company called Potamus Trading, which caters to institutions.

SBI Group has also indicated that it intends to get into Bitcoin mining because the market is monopolised by Chinese firms. To this end, it recently invested in Lancium Technologies of Canada, which provides wind power to cryptocurrency mining operations. 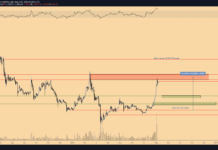 XRP Could Plunge Towards $0.21, Fears Analyst After Price Rallies 50%