It was only a matter of time before the U.S. Securities and Exchange Commission (SEC) moved in on the “Wild West” world of Initial Coin Offerings (ICOs), which has sent the blockchain world reeling. Yesterday, it finally did with its announcement that virtual tokens like the ones sold by the DAO are securities and now subject to federal securities laws.

The SEC is cautioning investors not only to be aware of the risks but also to ensure that those looking to get involved do their own due diligence as well.

One important distinction that seems to have emerged in the report, however, is that while DAO tokens are securities, Ether itself is still in the clear.

The Report seems to distinguish between Ether, labeled a virtual currency, and DAO Tokens, labeled a security. Market participants may take comfort in this distinction, as it supports the view that not all blockchain tokens are securities under the U.S. Federal Securities Laws. – Devebois Plimpton LLC

The announcement, nevertheless, is expected to have an impact on token sales. As a result of this recent development, it is important to note that any company looking to raise capital through ICOs in the U.S. will have to take this SEC decision into consideration.

On the legal side, Mark Radcliffe of DLA Piper told Bitcoin Magazine: “Those considering a token offering would be well served to reconsider their plans and ensure compliance in all of these areas, from tip to tail.”

Radcliffe said: “The SEC’s release is most notable on its survey of many of the corollary issues which can be triggered under the federal securities laws when a token is deemed a security, from registration or exemption, whether general solicitation is permissible, to crowdfunding, to after-market trading and even addressed compliance issues under the 1940 Act.”

What Is “The Howey Test”?

According to Jaron Lukasiewicz, CEO of stealth blockchain project WORKFLOW and former investment banker, “The standard test is an investment in a business where the buyer has a reasonable expectation of profits based on the efforts of others. It should come as no surprise that the SEC found that buyers of the DAO Token purchased a security.”

He explained that the key feature of the DAO token was indeed an expectation of profit if the investments made by the DAO were successful, and so DAO tokens were expressly sold as an investment.

Lukasiewicz added: “Unlike a token such as Ether, the DAO token had no other utility.  Many people in the industry at the time were concerned about the DAO for the reasons stated by SEC.”

Marco Santori, partner at Cooley LLP and legal ambassador for the Delaware Blockchain Initiative, shared an excellent summary of the report’s key points on Twitter, touching chiefly on the distinction between tokens that are and are not securities. 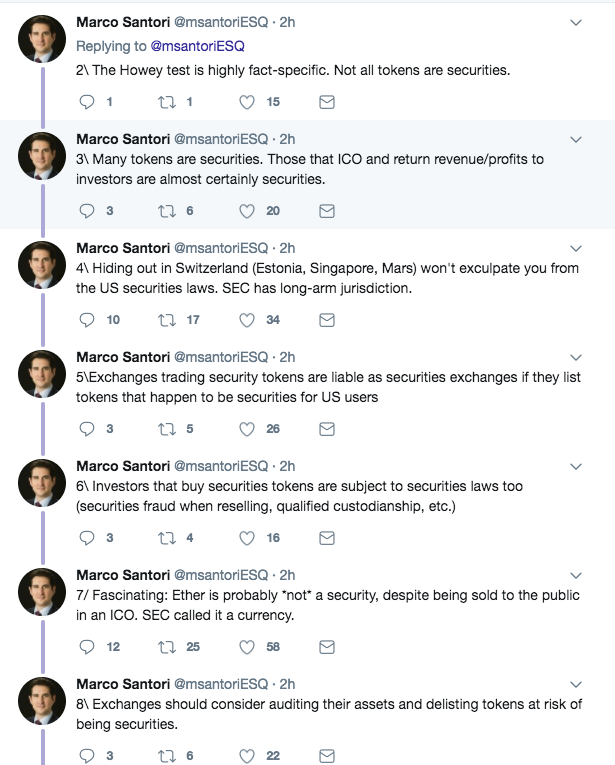 Arnold Spencer acts as general counsel for the Coinsource network of Bitcoin ATMs. He summed up the distinction in a succinct analogy:

Important — but Not Surprising

Ron Chernesky, CEO of social trading platform investFeed, said that he welcomes the SEC announcement, although he also noted that “before yesterday’s announcement, it was common knowledge that ICOs have been enveloped in a regulatory [gray] area.”

It would appear that that gray area has now shrunk somewhat.