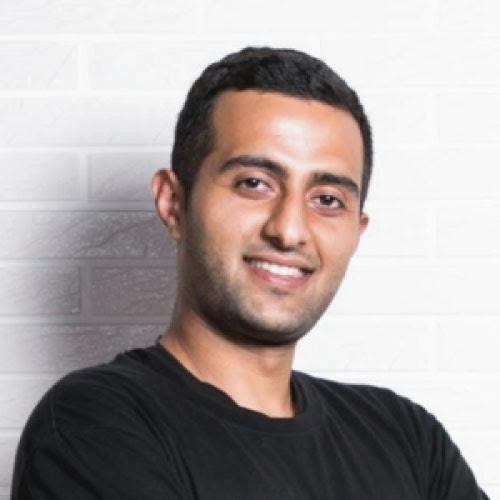 Garbage slowly piles up inside a public trash can. With each passing deposit the mountain grows larger and larger, until it tips over spilling onto the street.

You aren’t sure what to do with your banana peel so just lightly place it on top of the pile before moving on. This accumulated mountain of waste is a challenge facing cities all over the world.

By 2025, cities will produce an estimated 2.2 billion tons of solid waste per year, equivalent to 440 million decent-sized African elephants, up from 1.3 billion tons in 2012, according to The World Bank.

Despite continuously increasing quantities, waste management has barely changed since the 1970s and the introduction of modern recycling.

With the explosion of internet of things (IoT), smartphones, and artificial intelligence, doesn’t it seem strange that the way we deal with waste hasn’t changed much in a century?

Last week, I sat down last week with Hamoun Karami, 27, the Canadian founder of TWOIOT, a company that hopes to leverage both IoT and distributed ledger technology (DLT) to catapult waste management into the 21st century.

TWOIOT just announced a pilot to launch in Taipei City Hall, so I was excited to learn all about this new technology and what it can do for the future of waste management.

The News Lens: What’s the inspiration behind TWOIOT?

Hamoun Karami: One of the things I realized when I came to Taiwan was “this place is so clean!” but I can’t find a trash can.

We started thinking of apps and came up with one that used open data from the Taipei City government to map out trash cans and plot them around the city.

Once we developed that, we thought, why not let people report in full, why just stop at a map? Pressing a button sends a notification to our email, we can forward it with a time stamp and bin number. Reporting waste is a process that’s never been updated. Right now, if you go to a garbage can, they tell you to dial 091 to call the government and tell them the bin is full.

Then it kind of grew, why stop at bins, why not bikes, water foundations and bathrooms? Then we created Mapgea [which integrates numerous city facility apps in one place] People started saying “you have to brand this, you have to market it, people are going to love it, you have to sign up for Taiwan Startup Stadium (TSS) [a Taiwan government-backed] ecosystem for startups in Taiwan.”

TNL: And now you have this new company, TWOIOT?

HK: The new company is a pivot from Mapgea. TWOIOT is an IOT device that goes inside of a trash can and measures the fill level. It sends an ultrasonic sound wave that bounces off an object and is received by the sensor. Then there is a small calculation based on time to determine height [which] we turn into a fill percentage.

If you start in an indoor building, let’s say 13 floors, you have about 300 waste bins. You have trash, recycling, other waste. If you imagine each of those sensors on all those bins, now the task of waste management becomes optimized. A job that would require a lot of staff to be managed, becomes much easier. We also provide an analytics platform [and] and the data is visualized by the waste management team in real time.

Now imagine in an airport, you have 1,000 to 2,000-plus waste bins. Now you have a more complicated setup with garbage coming in from departure halls, in the back of house from office and staff, and international garbage. Our sensor takes a very complex system and makes it actionable in real time. Dublin Airport had a similar system [with] smart bin technology. They used to change 1,200 waste bins each day, now they are down to 93.

TNL: This sounds great, why aren’t these everywhere?

HK: The problem with smart city, IoT is adoption is that the penetration of these products is low – people are scared of costs. They don’t want to pay for these systems unless there is hardcore data to show this works. Also, these systems are old school, they have existed for 20-40 years without innovation, it’s like that old saying, “if it isn’t broken, don’t fix it.” But it is broken, and we can fix it.

If you follow waste trucks all around the world, you find these waste fleets follow a predictive maintenance schedule, they stop and stall at every single garbage can in the city. They check the bin, and if it’s full they change it.

This effects carbon emissions, traffic, city maintenance costs, even road quality. The externalities of this procedure are ridiculous. We want to build out sensors that are integrated at the city scale [and dynamically redirect these trucks using real time data.

The waste fleet will be directed and be told which bins to go to based on how full the trash cans are. This can be changed to “after 24 hours change the bin anyway” – for smell or health reasons.

Each sensor would also be tagged with garbage, recycling, or other waste. You can collect data and realize, indoor or outdoor, where you need more or fewer waste bins. You could start to understand why certain areas produce more waste; this is very valuable data for a city or company.

TNL: Who is the client for your product, cities or companies?

HK: Both, we want to service cities and private areas. A technology like ours could substantially reduce the costs of management for a private company. For a city, it would reduce the costs for tax payers and increase budgets. We are talking about billions of dollars a year in waste management costs.

We are signing an agreement to have our sensor put into the first three floors of the Taipei City Hall building as a proof of concept with the Taipei Smart City program.

The components in our sensor have been made with cost in mind. Our sensors are the same in reverse vehicle parking. Same sensor, why? It’s trusted by BMW, Mercedes, Toyota, it’s cost effective and widely available, the perfect mix for a sensor.

TNL: What about the distributed ledger technology (DLT)? What is that, why does it matter?

HK: IOTA is a DLT focused on solving the scalability issues of IoT devices. In the early days we thought about [the cryptocurrency] Ethereum, but we found immense value in what IOTA is doing. They have created this technology known as the tangle [a data structure that can map transactions at low cost] and our company can create sensors that can scale at the same cost. We have a network that scales up to a million sensors without additional cost. Directed Acyclic Graph (DAG), the graph that the tangle uses, is secure, tamper-proof, and immutable.

HK: We should care about this data. We want to use our sensor as a CSR [Corporate Social Responsibility] tool. For example, if McDonalds had our sensors put in all locations, we would have a secure, tamper-proof, immutable ledger of how much waste they produce [and] we can hold them accountable, levy taxes or whatever the government wants to do.

TNL: In your white paper, you have an ecosystem of waste going from the bin to the landfill. What does this mean and how does it relate to your future growth?

TNL: So this is automated, there isn’t a managed back end?

At the end of this cycle you have the IOTA tangle ledger, smart data that stores all this activity. It’s starting to create a diary of the supply chain of waste from collection to landfill. That ledger would be used by governments, private companies, or even by the people managing the landfills or the collection facilities.

TNL: To finish off, why Taiwan?

HK: First, Taiwan is a hardware island and manufacturing heaven. Secondly, talent. Taiwan has a plethora of engineers and people who are extremely capable of helping you build a business. Why did I stay? Standard of living is incredible, love the food, love, hiking. Just hate the heat, that’s it.

This interview was edited for clarity
Editor: David Green

Sensing the Future of Waste Management with TwoIoT was originally published on international.thenewslens.com. The IOTA-News Community curates, examines, and summarizes news from external services while producing its own original material. Copyrights from external sources will be credited as they pertain to their corresponding owners. The purpose is to make use of 3rd party content or pictures as either allusion or promotional endorsement of mentioned sites. If you have a claim of copyright infringement with respect to material, please mail to support[at]iota-news.com. IOTA-News.com is a community run website and is NOT affiliated with the IOTA Foundation in any way.

The post Sensing the Future of Waste Management with TwoIoT appeared first on IOTA News.

Cardano (ADA) has become one of the most popular cryptocurrencies to talk about lately, and as time passes, more and...