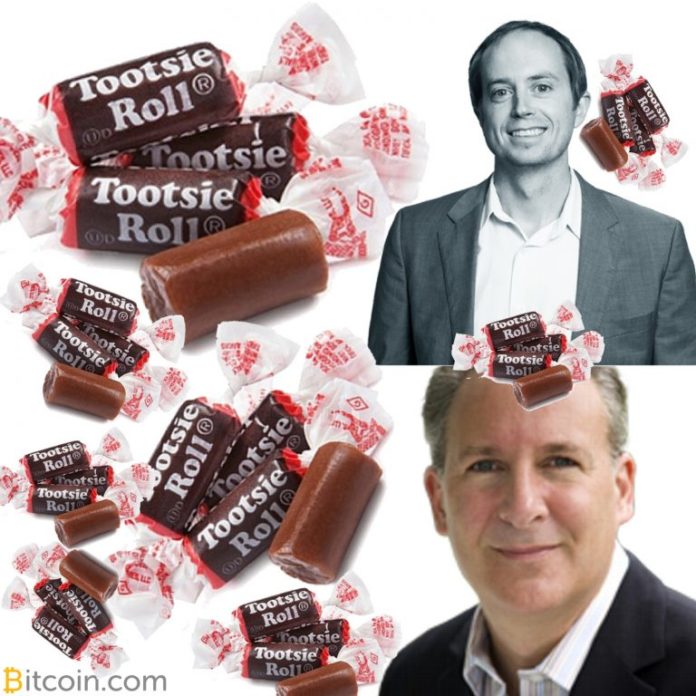 “Bitcoin, or a similar form of cryptocurrency, will eventually replace governments’ fiat money as the preferred medium of exchange” was the resolution for a rollicking debate between Shapeshift CEO Erik Voorhees (affirmative) and Euro Pacific Capital Inc CEO Peter Schiff, prominent cryptocurrency skeptic (negative). In a victory for the crypto community at large, Mr. Voorhees was judged the winner by audience vote, moving 15% of the assembled crowd to support the resolution; Mr. Schiff managed to actually lose his base support by the end of the night, having been thoroughly beaten. The winner earned bragging rights and the traditional Tootsie Roll.

The sold out, standing-room only audience at the Subculture Theater was treated to a good old donnybrook, a philosophical fisticuffs, lasting a full hour and a half (including audience questions). Sans necktie, wearing a light-colored suit, Mr. Voorhees argued in favor of the resolution, defending the idea of crypto finally usurping fiat hegemony. Mr. Schiff, in a muted royal blue suit with yellow tie, met his challenger to express intense incredulity that magic internet money beans could be anything more than a faddish bubble.

After brief introductions by Mr. Epstein, Lincoln-Douglas format demands the affirmative position make its case. Mr. Voorhees appealed the crowd’s natural bias immediately by reminding them of his infamous tangles regarding the state’s odious Bitlicense affair. He cheekily asked a future Forum debate be held on which is now more socialist, China or New York. He also paid homage to his night’s sparring partner, Mr. Schiff, in that the bearded gold bug’s podcast, as far back as 2008, was an influential factor in Mr. Voorhees’ embracing of free markets.

Mr. Voorhees argued four main points: why bitcoin is good money, why fiat is bad money, why gold is insufficient, and lastly why bitcoin will win. Most of the arguments, it might be fair to say, veterans in the space have heard. Bitcoin’s being provable scarce, its immutability, its near infinite divisibility, its durability with regard to the vast network of computing power, worldwide, at its disposal. Anticipating Mr. Schiff’s reliably arguing in favor of gold, Mr. Voorhees was keen to contrast bitcoin’s many advantages over the ancient metal, including debasement and counterfeit issues (bitcoin can’t be filled with tungsten, for example). Peter Schiff came to prominence during the 2008 Great Recession, having ‘predicted’ – his word – the real estate bubble and subsequent crash (he claims same of the dot com shake out). His viral videos of braving Occupy Wall Street urchins, toe to toe, made for compelling viewing. Tonight, however, he was the Mr. Schiff who just cannot see his way to accepting crypto as anything near legitimate. The resolution somewhat pigeon-holed him as essentially arguing in favor of fiat, but, of course, everyone who knows knows Mr. Schiff is hardly a fan.

Mr. Schiff made the oft-stated claim few, it seems, were actually ‘in’ to cryptocurrencies for the tech or even their potential as mediums of exchange. They are, he stated flatly, taking a financial position out of pure greed. Its being a speculation play was an enormous strike against it. And, even still, if folks wanted to use the decentralized money, they were hard pressed. Furthermore it’s not even a store of value, having slid some 60 percent since the end of last year, and its present volatility isn’t any better, he ventured.

He acknowledged how the “fiat system that we have now is not going to work, but replacing fiat currency with a digital fiat currency is not an improvement” either. Gold was the case Mr. Schiff came to make, his reliable go-to in every debate. The mere fact of gold having been around for centuries was proof enough bitcoin is no match. He asked rhetorically, “What are the odds that bitcoin’s the best cryptocurrency that’s ever going to be invented?” Gold, he maintained, has never been improved upon.

In the end, the men settled on some agreement: governments can outlaw bitcoin, something gold has been able to function reasonably well under; bitcoin might very well not be the final crypto standing; most people find comfort in government-issued money. Mr. Voorhees’ counter that bitcoin’s utility in areas of remittances, cross-border nature, being deflationary and censorship resistant carried the day. Audience polling prior to the debate had Mr. Voorhees’ and Mr. Schiff’s positions at 40% approval each. The debate formally terminated when it was announced Mr. Voorhees gained a whopping 15% of the voting audience to his side (55%) while Mr. Schiff’s support plunged to just 31%. After, the victorious Mr. Voorhees and friend, and equally important ecosystem pioneer, Nic Cary, dined with Peter Schiff, and were able to fashion him with a first bitcoin transaction.

Are debates an important way to educate about crypto? Let us know in the comments.

The word on the crypto-verse is that the Tron (TRX) token migration is going along smoothly with some exchanges already...