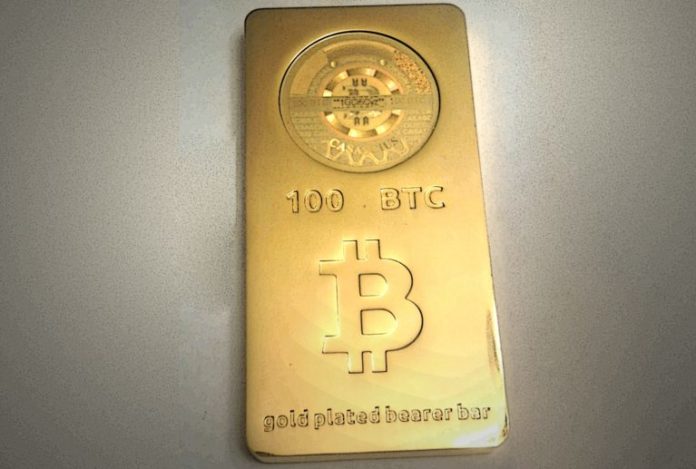 In 2011, Mike Caldwell created the notorious Casascius physical bitcoin collection, and since then the series of coins has become extremely valuable. Over the last two months, a bunch of people have redeemed their Casascius coins and on December 23 someone peeled a 100 BTC ($723K) Casascius bar.

Years ago, people made physical bitcoins and there’s been so many manufactured that there’s actually an encyclopedia that covers the subject. These days, however, there’s not as many physical bitcoin manufacturers as government regulations have stifled the industry. There are definitely a few creators still minting loaded crypto coins, but there’s nowhere near the number of physical coin makers as there was back in the day. Casascius coins are the most popular of all the physical BTC coinage ever created. Unfortunately on November 27, 2013, Caldwell had to suspend sales of all the items he manufactured that contained digital bitcoins. Throughout the Casascius manufacturing period, Caldwell minted coins and bars that contained 1, 10, 25, 100, and 1,000 BTC increments.

Casascius coins have always been in high demand and many have sold for a premium, well above the amount of BTC held on the metal. For instance, in April 2018, someone created a post on the shiresociety.com forum selling four 2011 Casascius coins for $10K per coin. Each of the coins sold on the website at the time contained a 1 BTC load under the hologram sticker. The price per BTC during the month of April 2018 was around $8k so the seller added a $2K per coin premium. On July 1, 2019, a 2011 mint-condition gold Casascius coin (MS65) that held 1 BTC sold for $99,000 on eBay. In November 2017, a Casascius physical bitcoin with a hologram error was purchased for $50K on the online auction site. In January 2018, another graded MS65 Casascius sold for $28.7K on Ebay.

This week, on December 23, an individual peeled a 100 BTC Casascius bar currently worth $723K just for the BTC alone. According to data from casasciustracker.com, the Casascius S2-BAR-100 held 100 BTC and was created on February 4, 2013. In fact on Twitter, there’s a bot that tracks all the peeled (redeemed) Casascius coins and bars. The bot called @Casasciusbot recorded the last big peel, which saw a 25 BTC (S2-COIN-25) redeemed the day before.

In the last 30 days, the Casasciusbot has documented lots of coin peels mostly in increments of 1 BTC every few days. But there’s been plenty of higher denominations redeemed as well and many derive from the series 2 batch. The month of November saw 27 Casascius coins peeled worth approximately 71 BTC. 11 of those redeemed coins were from 2013 and the rest of the pieces derived from 2012 and 2011.

To date, there are 46,329 active BTC left on unredeemed Casascius coins and bars. There’s also been 44,940 BTC loaded Casascius-made products that have been peeled to date. It’s interesting to watch the timeline of people peeling these coins and wonder why they decided to redeem the funds now, especially when they might have more numismatic value in the future.

The post Someone Redeemed a 100 BTC Casascius Bar Worth Over $700K appeared first on Bitcoin News.

Why Bitcoin Will Generate 1000%+ Returns in the Next Few Years

Bitcoin is looking set to end the year almost double its price at the beginning. The long term trend is...