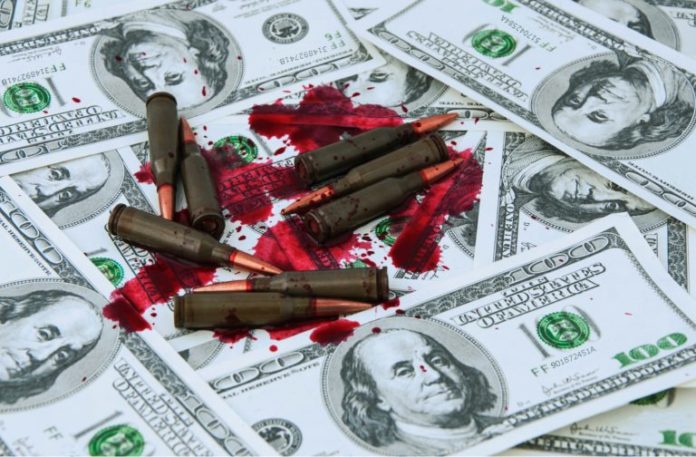 After nearly two decades of U.S.-led coalition bombs falling on the Middle East, peace in the region still has not been achieved. Now the United States is once again bolstering military forces, this time in Saudi Arabia. Meanwhile, taxpayers in multiple countries are being forced to pay for these ill-fated and unethical campaigns, with little to no say in the matter. Bitcoin and cryptocurrency provide a means, however, to store and move value in peaceful ways, in lieu of donating to the murder of strangers overseas.

Also Read: Privacy Is a Human Right Worth Fighting For War Is Funded By Force

Abandoned by US forces back in 2003, Saudi Arabia’s Prince Sultan Air Base will now be home to at least 500 more American troops, aircraft, and air defense missiles, according to statements last week by DoD officials. A large percentage of the bill for this move will be footed by American taxpayers, who have no real choice in the matter.

While the move is understood to be about preparations for defense against a potentially dangerous Iran, some have their doubts about the legitimacy of these claims. Controversial news stories about who attacked who, seemingly open to more than one interpretation, have those hard-working individuals involuntarily funding the U.S. military machine hesitant. With banks and employers tracking and taxing their U.S. fiat, however, the hesitation is irrelevant. They must pay, or else.

Violence in the Name of Peace

So what do individuals in coalition countries pay for when the tax bill comes? Afghanistan is in the midst of a famine and displacement crisis. In Iraq, depleted uranium from U.S. weaponry continues to wreak havoc on infants, children and young adults in the country, as the silent birth defect epidemic rages on. Syria and Yemen are in shreds with hospitals and school buses being some of the shocking targets of U.S. drones. If this is the “peace” individuals have been paying so much of their income for under threat of violence, it doesn’t seem to be working. In fact, in 2018 the average American taxpayer worked 63 days just to fund the military. If one doesn’t work to this end, they are fined or arrested. Getting Into Bitcoin for Change

There’s no shortage of bitcoiners who became so solely in the interest of making a few bucks, or landing their first “moon Lambo,” but that’s hardly the only reason for interest in the cryptocurrency. From the beginning, the movement has been highly philosophical. Satoshi Nakamoto himself famously embedded a newspaper headline into the first transaction on the genesis block: “The Times 03/Jan/2009 Chancellor on brink of second bailout for banks.” It’s arguably always been a subversive money, aimed at non-violence, sound financial policy, order, and peace.

It is no secret that trust-based financial systems of the state are backed by force. This is why even if one stands opposed to financing the havoc and carnage perpetrated via warfare, there’s not a whole lot of choice when it comes to safely opting out. There’s always the risk of being caged or assaulted by federal agents and police should one resist. This resistance to these immoral funding methods is euphemized as criminal “tax evasion.”

Due to the decentralized nature of cryptocurrencies, however, instead of having funds funneled through a centralized institution such as a major bank, it is now possible to hold a virtually unlimited number of private addresses and wallets, giving users much more control over their money. Instead of waiting in line to “withdraw” what is already theirs from a state-sponsored lending institution or bank — dealing in debt-based currencies and credit traps — market actors can enjoy instant transfers for minuscule fees. They can also divvy up the funds and distribute them to myriad locations easily. When it comes time to “voluntarily” pay for weapons meant to kill other human beings, they can simply remain silent and choose not to. The Doors of Choice Are Open

Strange that refusing to pay for violence is viewed by so many as a crime. Not wishing to finance the drone bombings of school buses, hospitals, or strangers is viewed by governments as “anti-social” behavior. Up is down and down is up. As such, each individual who wishes to act ethically and starve this dysfunctional paradigm must assess their own risk and act accordingly. What cannot be contested, though, is that now the doors are open to keeping one’s value from serving these abominable ends, at least to some extent. Cryptocurrency, if used properly, is means by which to do this.

Coin shuffling (a process by which owners of crypto such as BCH can mix their holdings to make them very difficult to trace), and other secure, anonymizing protocols make it safer and easier to exercise financial autonomy. Paper wallets (and other cold storage technology) can be used to leave an offline, virtually unextortable inheritance to loved ones. In this sense, crypto provides a way to opt out of paying one’s wealth to spill blood into the sand on the other side of the world.

This is much harder to do when your employer pays fiat, taxes everything automatically, and banks are tracking each and every deposit. Of course as mentioned earlier, there’s always a risk, but that’s for each individual value holder to decide, and no one else. On top of all this, crypto can also be used to send much needed humanitarian assistance to those suffering in ravaged or economically unstable countries. Iran Implements Its Own Crypto

What will become of the current tensions with the U.S. and Iranian governments, or the reactivated air base in Saudi Arabia, remains to be seen. Now creating their own gold-backed state crypto, and having sanctioned mining for the same currency, Iran’s government seems to have chosen its road, and it’s not the path of the almighty U.S. dollar.

On July 21 Abdolnaser Hemmati, governor of the Central Bank of Iran, stated:

A mechanism to mine digital coins was approved by the government’s economic commission and will later be put to discussion at a cabinet meeting.

This is big news, especially since the official digital currency will be a non-USD compliant token, politically speaking, backed by stable gold reserves. Iran’s Deputy Minister of Energy noted that energy provisions for mining farms would soon be discussed as well.

While Iraq, Libya, and others have met with grave U.S. military violence for attempting to leave the dollar in recent years, Iran has upped the ante and jumped not only on the USD abandonment train, but also on the warily-eyed-by-the-state tsunami trend of incoming crypto adoption. Talk of Facebook’s Libra, Bitcoin, and others understandably have governments worldwide concerned. More violence in the Middle East, though, won’t bring anything more than blood, and the ability to opt out of this violence has become a little simpler, mercifully, thanks to Bitcoin.

Do you think crypto is a peaceful way to opt out of funding war? Let us know your thoughts in the comments.

The post Sorry, I Don’t Want to Pay for More Bombs: Bitcoin as a Hedge Against Funding War appeared first on Bitcoin News.

There has been a marked resurgence in active bitcoin traders along with the price rally over the past three months....