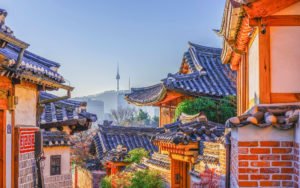 The South Korean crypto ban placed back in 2017 was a breach of fundamental rights, holds the arguments in a recent public plea.

South Korean Government Placed Multiple Restrictions on Trading, ICOs
South Korea moved in to curb the activity of exchanges, stemming the inflow of fiat to those markets. The ban, which happened near the peak of the 2017 bull market, added to the loss of value.
South Korean investors have moved into crypto assets as a way to hedge a decade of sluggish economic growth. But locals have also shown propensity for other fast-returns investment schemes, causing the government to react and limit crypto investments.
Because of disputes regarding limitations to local crypto exchanges, the Constitutional Court will open a public plea period this January 16. The hearings will reveal public attitudes and intentions to trade cryptocurrencies, reported the Korean outlet Tokenpost. The hearing was brought about by the filings of 347 individuals, claiming a limitation to their civil rights, due to curbs in crypto trading.
“Regulation infringes on the right to equality and the pursuit of happiness,” said Chung Hee-Chan, a lawyer from the Anguk Law Office that is dealing with the case.
South Korea was instrumental to both the BTC and altcoin market, at one point keeping up prices at a premium. The rate, known as a “Kimchi premium”, boosted BTC to above $20,000. At one point, the Korean won was among the most active currencies to add liquidity to the crypto market.
But soon, reports of local banks refusing to service traders and exchanges worsened the market climate. Around that time, Seoul also cracked down on domestic token sales, or ICOs, once again with an aim to protect personal finance. Currently, Korean exchanges are slightly more active, though far from the levels seen back in 2017.
Exchanges Still Achieved Significant Gains
South Korea has also faced a growing number of attacks against its big exchanges, with Upbit’s case once again revealing weaknesses in asset protection. The Korean Won now only takes about 2% of all BTC activity, although local exchanges have tried to bypass banks by adding stablecoin pairs.
The South Korean government is still working on finalizing its approach to regulating cryptocurrencies. In early 2020, Seoul is working on a taxation approach for various participants, to define the best way to levy taxes on crypto-based gains. Those regulations led to a significant tax bill for the largest market operators, which affected Bithumb.

Despite difficulties and bank restrictions, Korean investors have brought significant gains to exchange operators, to merit the high tax bills.
What do you think about Seoul’s stance on crypto trading? Share your thoughts in the comments section below!

Telegram stated the U.S. Securities and Exchange Commission (SEC) is overstepping its regulatory mandate and misapplying securities law, in a...