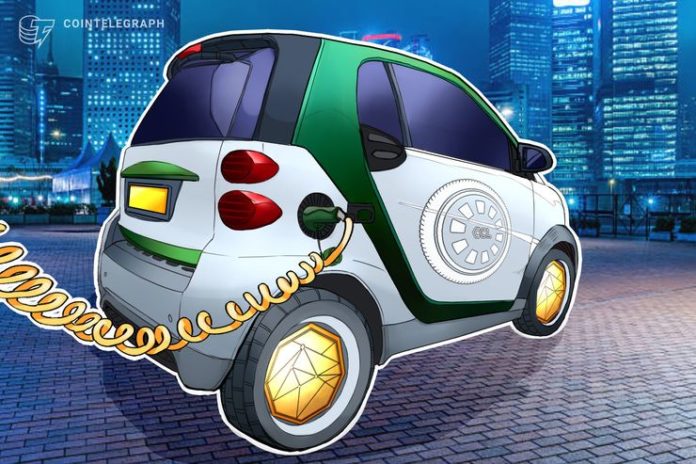 A Singapore blockchain startup is launching a fleet of blockchain-enabled electric vehicles that mine crypto as users travel. The company intends to reduce carbon emissions and to reward people for doing so.

Road vehicles such as cars, trucks and motorcycles are the largest contributors of CO2 emissions in the transport sector, overshadowing that of trains, planes and boats. In the United Kingdom, the transport sector is the U.K.’s biggest contributor to CO2 emissions, and at present, there is a scramble not only in the U.K. but worldwide to put more electric vehicles on the roads.

CyClean aims to combat the issue by combining blockchain and cryptocurrency software with electric-powered vehicles as well as other products, such as solar panels and bicycles. The company will allow its users to rent these energy-efficient products and be rewarded with cryptocurrency.

Electric vehicles and products supplied to CyClean by leading producers are upgraded with a chip that connects to the CyClean server, it then tracks the traveled meters or watts of the user and rewards them accordingly.

There is a fixed amount of daily rewards for users and that total is divided by the number of users who have exceeded more than a kilometer of travel that day or produced more than one watt. With that said, the amount of CyClean coins awarded to users will be proportionate to the distance travelled or watts produced.

According to the CyClean white paper, their business model covers the electric bicycles and motorbikes, and they will be moving toward electric cars in the near future. They also have intentions to expand their motorbike sales to Southeast Asia, where usage of these vehicles is very high.

CyClean says it is an operating business that has recently completed a successful Initial Coin Offering (ICO) and is preparing to launch domestic solar panels and an e-bike, adding to their range of products that mine the platform’s native cryptocurrency, the CyClean Coin (CCL). A CCL/USDT trading pair is now listed on HitBTC, a global cryptocurrency exchange, the CyClean team announced in August. At the time of writing, CCL is the highest trading ICO token on HitBTC, following only the established cryptocurrencies and altcoins, according to CoinMarketCap.

The company is taking itself rather seriously and is firmly combating the negative stereotypes of ICOs and blockchain technologies. At a recent blockchain conference in Seoul, CyClean’s strategic planner Joseph Nam spoke with others regarding the past, present and future of technology, discussing regulations, ICO laws and how important blockchain will be “in the coming Fourth Industrial Revolution.”

The conference was attended by former ministers of education in Korea, the president of the Korea Blockchain Association and other prominent government and industry figures. CyClean is attempting to establish solid connections with governments, groups and other organizations to see its presence expand beyond South Korea to other parts of the world.

The trend of electric or hybrid vehicles is on the rise, and recent research has estimated that 13 million new electric vehicles are going to be produced every year until 2021; International Energy reported that in 2017, the number of electric cars in circulation had surpassed 3 million globally and is expected to reach 125 million by 2030.

Blockchain technology solutions paired with electric vehicles have begun to take off. Recently, a partnership was struck between a United States-based company and China’s largest electric bus operator to provide financial services.

In 2017, another blockchain company began testing a peer-to-peer electric vehicle charger marketplace that enabled users to charge their cars by using another person’s power outlet.

Social media company Line Corporation recently launched their first service into the cryptocurrency space, known as BitBox. The creators of...