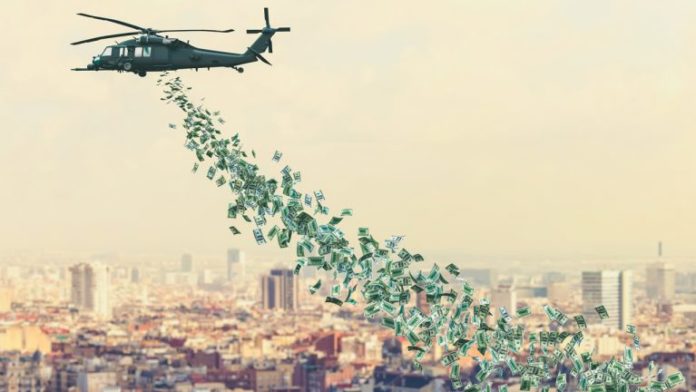 Central banks worldwide have injected further stimulus into the economy, as European Union (EU) leaders recently approved a $2.1 trillion budget, the Bank of England boosted stimulus injections in mid-June, and the Federal Reserve announced on Wednesday that it would keep lending until the end of the year. Meanwhile, bank indexes show that financial institutions based in the UK, Japan, and the EU are about to break support levels that have held up since the mid-eighties.

The global economy looks bleak and the world’s central banks are trying really hard to keep the monetary system from breaking even further. This week, members of the U.S. Federal Reserve met for a two day Federal Open Market Committee (FOMC) meeting to discuss the U.S. economy. Fed chair Jerome Powell told the press that the “pace of recovery looks like it has slowed”

During the two-day FOMC event, Powell and the committee decided to keep the benchmark lending rate unchanged, at near zero. In addition to this move, the Federal Reserve also said that it plans to continue lending to private financial institutions until the end of the year. The lending was supposed to halt in September, but the committee is keeping the money flowing. Further, the Federal Reserve doesn’t think that the benchmark lending rate will be changed until the year 2022. “The coronavirus outbreak is causing tremendous human and economic hardship across the United States and around the world,” a statement from the Federal Open Market Committee explained. “Following sharp declines, economic activity and employment have picked up somewhat in recent months but remain well below their levels at the beginning of the year.”

Following the meetings on Tuesday and Wednesday, the U.S. Commerce Department published the worst gross domestic product (GDP) report ever. The GDP shrank by 32.9% during the second quarter of 2020 according to the report. The chief economist at IHS Markit, Nariman Behravesh, called the report “horrific” and said: “We’ve never seen anything quite like it.” Analysts believe the decline was largely fueled by a lack of summer consumer spending and economists expect a disastrous economic fallout in the winter.

In addition to the Federal Reserve, central banks worldwide are distributing stimulus injections like water. News.Bitcoin.com recently reported on the $2.1 trillion budget approved by the European Union, and the Bank of England (BoE) added an additional £100 billion ($131.2 billion) in asset purchases on June 18. BoE also revealed that the monetary policy committee plans to boost the central bank’s asset purchase program to £745 billion.

In mid-July, the Bank of Japan (BoJ) decided to keep the country’s benchmark lending rate at -0.1% for Japanese banks that collaborate with the BoJ. Japan’s central bank also plans to keep the monetary policy stimulus going strong and Japanese leaders blame the economic challenges on the novel coronavirus.

Pal said on Thursday that the UK and Japanese banks are about to break significant support levels that held for decades.

“Another reminder to not lose sight of the big picture,” Pal tweeted. “UK banks are about to break the only support since the start of the index in 1986. EU banks had a small re-test of the cliff of death and new all-time lows most likely await. Japanese banks are rolling back down and will probably fall to all-time lows (below 1983).” The Global Macro Investor continued by adding:

This is one of the reasons the central banks are rushing to create digital currencies – it gives them the ability to run a banking system without banks, should they need it. U.S. banks don’t look like they are going to avoid a sharp fall in their share process either, but the U.S. banks look in better shape currently than the others.

The U.S. dollar dropped to lows not seen since 2018 on Thursday according to the currency’s trade-weighted index. The USD index against a basket of fiat dropped from 93.42 to 92.82 on July 30. It is the weakest the American dollar has been since May 2018, and a number of analysts have concerns about the currency’s future. Over the last two days, the Federal Reserve cited difficulties with unemployment levels and the liveliness of the U.S. economic system in general.

On Thursday, it was revealed that the U.S. saw 1.43 million new unemployment claims for the week. Collectively there are more than 54 million Americans that have filed claims, according to seasonally-adjusted data stemming from the U.S. Bureau of Labor Statistics.

“It is definitely a bit more cautious and dovish, and basically tells the market they’re not going to raise interest rates any time soon,” Kathy Lien, managing director at BK Asset Management in New York stressed on Thursday. “In an environment where the market is dumping dollars, it’s another excuse to drive it lower.”

A great number of global investors have said that the central bank’s stimulus and interest rate moves worldwide will continue to cushion precious metals and cryptocurrency markets. Bitcoin (BTC) has been hovering just above the $11k zone, while gold is trading for $1,957 per troy ounce of the fine metal.

Do you think the rounds of fiscal stimulus will bolster bitcoin and precious metal markets? Let us know in the comments section below.

Even after a slight pullback from the local highs of $330, Ethereum remains one of the best-performing cryptos of the...