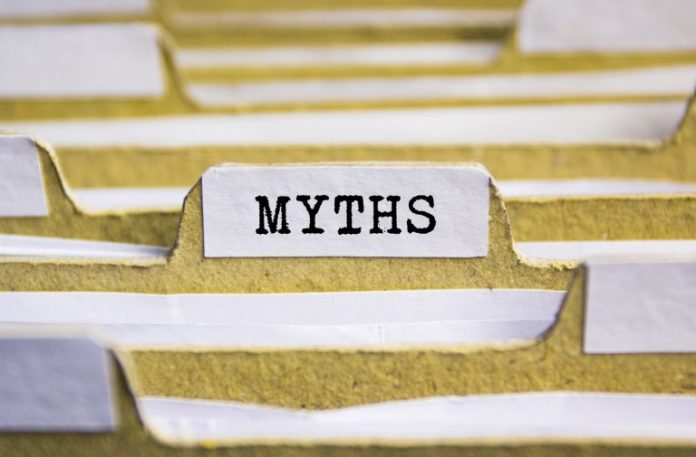 For those long involved in the crypto space, it’s easy to forget just how overwhelming and mystifying the world of bitcoin was when first encountered as a fresh-faced neophyte, unable to tell the difference between a bitcoin and a blockchain, or even what a private key was. In that interest, it stands to examine 7 common myths surrounding the permissionless digital asset, to help disperse some of the troublesome fog that can obscure the true nature of crypto for beginners.

Also Read: Here Are Some Fun Things to Do With Bitcoin Cash

The Nature of Myths

Myths and works of fiction aren’t powerful unless they contain some element of truth in them, or point to some deeper reality. In much the same way, myths and common misconceptions surrounding bitcoin and crypto often find their basis in real life situations or partial truths, leading to confusion down the road for those who don’t have the informational tools to sort out the difference. This post seeks to provide some of these tools. Whether one is talking about bitcoin core (BTC), or bitcoin cash (BCH), which was forked from BTC in 2017 to preserve the original vision of Bitcoin creator Satoshi Nakamoto, bitcoin is not anonymous. Using a simple tool called a block explorer or other analysis software, any and all bitcoin transactions can be viewed publicly. Indeed, part of the strength of bitcoin is its virtually immutable transparency which can prevent fraud, theft and third party tampering.

A bitcoin transaction is very different from a traditional bank or credit card transaction. The sender and receiver’s names are not used, but a random string of characters called a bitcoin address. In this sense, bitcoin is pseudonymous. Anonymizing protocols which shuffle coins or reroute and encrypt web traffic can also be used to further obscure transaction details. In short, bitcoin can be pretty private and nearly anonymous, but it takes some work.

2. Bitcoin and Blockchain Are the Same

Blockchain is just a buzzword for a digital ledger or record of information. Bitcoin transactions are recorded and secured on the bitcoin blockchain by miners. These miners are individuals or groups who use specialized computing power to solve complex mathematical puzzles which serve to create blocks of verified transactions. Miners receive built-in bitcoin rewards for doing this work.

While the bitcoin network is decentralized and permissionless, meaning anyone can use it freely, running their own node and verifying the blockchain for themselves, other networks such as those of businesses, governments and banks feature centralized blockchains, whose records or digital currencies are stored at central servers, and are only viewable and usable by approved parties. Bitcoin points to a specific network and currency utilizing blockchain technology. Bitcoin in and of itself is not synonymous with this technology. U.S. President Donald Trump famously quipped back in July that bitcoin is “based on thin air,” but he overlooked a critical economic reality: so is everything. Because value is ultimately subjective in nature, markets are free to value what they will, how they will, and when they will. This is how the cowry shells of ancient times came to be money, and gold as well.

A currency which has great market utility eases the problems inherent to barter and is viewed as as a highly saleable good in an economy. Bitcoin’s fast speeds, low fees and lack of centralized oversight give it a cutting edge which causes people to ascribe value to it “out of thin air.” The paper dollar bills filling our wallets have value simply because everyone is forced to use them, and thus “agrees” to do so, while the government continues to print them out of the same thin air, devaluing the currency. At least in bitcoin’s case, the supply is limited to 21 million.

4. Bitcoin Is Money for Criminals

Statistically, the overwhelming majority of crime is facilitated by the U.S. dollar and fiat currencies, not bitcoin.

5. Bitcoin Is a ‘Get Rich Quick’ Scheme

As noted at the outset of this article, there’s a little bit of truth to every lie, and there’s no use pretending the world of cryptocurrency isn’t rife with snake oil scams and pyramid schemes. Especially as very real and significant amounts of value can be made by traders and holders of the currency. That said, there’s nothing about bitcoin itself that could be conceived as a “scam” because it’s only a decentralized network of users, developers, nodes and miners, and not an organization.

Scammy groups and companies may try to leverage the network and currency to their advantage, just as con artists leverage credit card numbers and bank account information for their own, but bitcoin itself is just a tool that has nothing to do with these bad actors.

6. Only Tech-Savvy People Can Use It

With all the specialized jargon, alien-looking public and private keys, crypto Twitter drama and talk of hash rates and halvenings, it’s easy to see why entering the world of cryptocurrency might be daunting for a newcomer. That said, getting started can be simple as downloading an easy-to-use wallet such as Bitcoin.com’s own wallet app, and visiting a faucet to receive some free bitcoin cash (BCH).

Sending and receiving bitcoin is as easy as copying and pasting an address, or scanning a QR code. Even business owners are finding that adoption is easy, and they don’t have to know anything about Satoshi, Schnorr Signatures or cryptoanarchy to enjoy the benefits of quick, low-fee, permissionless cash. 7. Bitcoin Is an Organization or Centralized Group

As stated above, bitcoin isn’t a company like Visa or Paypal. It’s not an investment firm, MLM group or a broker. Bitcoin is a network and a cryptocurrency. The network is decentralized, enabled and secured by independent actors worldwide who run nodes — keeping a record of the entire blockchain themselves — mine blocks, develop software and make transactions, creating the market. In this sense, it’s really quite a wonder of modern technology, comparable, according to some, to the advent of the internet. Anyone who doubts the protocol’s structure is free to audit the open source code directly, as nothing is hidden. Further, nothing can be centrally altered.

Hopefully, this short venture into the world of bitcoin has cleared a few things up for the crypto curious. If you’re of the spirit of Satoshi Nakamoto, looking for “an electronic payment system based on cryptographic proof instead of trust, allowing any two willing parties to transact directly with each other without the need for a trusted third party,” bitcoin may be for you.

What are some other common myths and misconceptions about bitcoin? Let us know in the comments section below.

The post Tackling 7 Myths About Bitcoin for Beginners appeared first on Bitcoin News.

Bitcoin is crashing in real-time and nothing can stop the market from experiencing new lows. The price has finally reached...