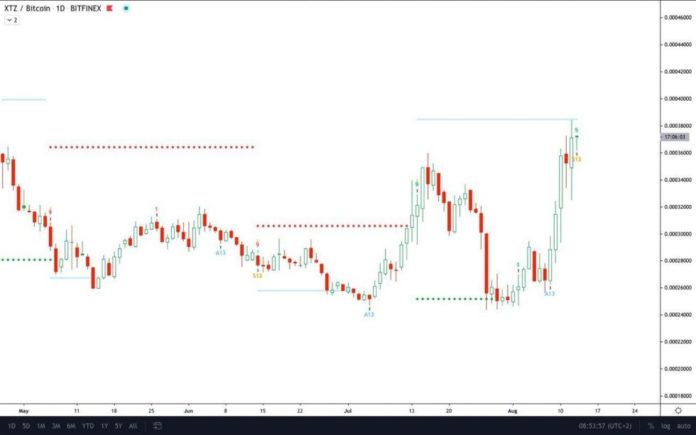 Tezos has been in a steep uptrend over recent days. According to coinmarketcap.comthe asset has surged 27.2% against the dollar in the past week and around the same against Bitcoin. As of this article’s writing, XTZ trades for $4.10.

According to a Telegram channel tracking instances of this signal, XTZ has just formed a “Sell C-13” candle against Bitcoin. This signal suggests that the cryptocurrency will reverse lower in the days ahead.

The indicator has had accuracy in calling XTZ’s price action against Bitcoin. The two previous “Buy A-13” candles marked two local bottoms in the past month while “sell 9” candles have marked recent highs.

This signal comes as analysts have expected for Tezos to continue to surge.

Josh Olszewicz, analyst at Brave New Coin, shared the chart seen below earlier this week. It shows that XTZ is primed to move towards $4.50 and beyond.

The optimism was echoed by other market participants, who noted that the cryptocurrency is in a bullish state as it is establishing a new all-time high. This move should trigger a “price discovery” rally where there are no historical resistances to suppress an asset.

The Need for Alternatives to Ethereum

What may boost Tezos in the longer run, though, is the ongoing scaling narrative placing out in the Ethereum ecosystem.

Ethereum has been seeing record transaction fees over recent days due to an influx of transaction demand, leading to unsustainable fees for many.

If Tezos can attract developers, users, and assets, it may begin to take some market share from ETH.

Bitcoin plunged as low as $11,100 earlier this week. The drop led many analysts to think that the cryptocurrency was...