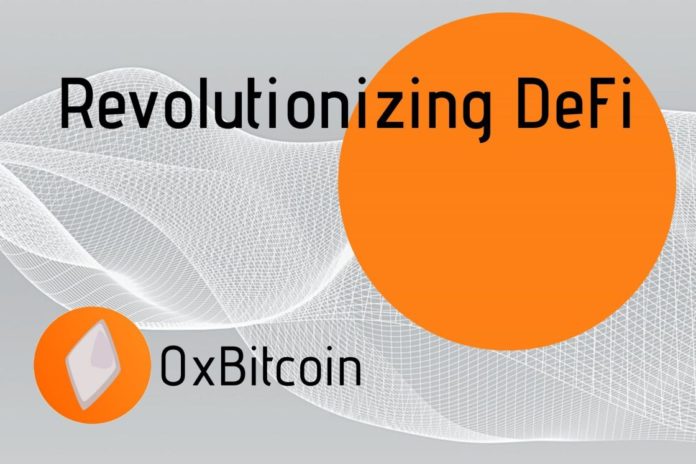 Within the crypto sector, DeFi is one of the fastest-growing sub-sectors. The idea of DeFi or decentralized finance is based on the concept that the financial system can be recreated, but this time in a decentralized fashion. Essentially, it would allow everyone to access all the financial instruments available in the financial world without the centralized control of governments and companies.

Recent allegations about the misuse of funds by centralized financial firms in the crypto world– such as Tether– have helped to spur interest in DeFi. The original DeFi applications were Ethereum and Bitcoin. Unlike fiat currencies, an independent network of computers controls them. Many have compared BTC to gold and claim it is a store of value. However, the possibilities offered by BTC and ETH are limited.

It is this reason projects such as 0xBitcoin aim to capitalize on what BTC and ETH have already achieved.

How 0xBitcoin is Revolutionizing DeFi

0xBitcoin is based on the ERC918 token standard. This token standard is the same as the ERC20 standard, but with added functionality. ERC918 tokens have the capability of being mined through the Proof of Work algorithm.

Bitcoin inspired 0xBitcoin creators, but 0xBitcoin is not Bitcoin. It comes with the same properties of BTC but has the added advantage of being supported by an Ethereum smart contract. Other similarities to BTC are the halving rules. Just like BTC, LTC, and other PoW coins its value is determined by the rules of supply and demand caused by the scarcity of mining new tokens, and the market demand for the tokens.

One major difference between 0xBitcoin and other DeFi coins is that the first does not have the same security problems, unlike others. Existing DeFi tokens rely on price oracles or Admin keys to remain secure. However, these attributes also make them riskier to use. In some cases, holders of these coins have lost all their coins due to security flaws.

Some of the common problems in these tokens are network outages that lead to price oracle delays, hackers stealing tokens from smart contracts, malicious project owners setting up exit scams, reentry bugs, and inflation bugs, which affected five projects at once. The way 0xBitcoin is set up ensures that none of these problems can affect it.

While many stablecoin projects claim to be decentralized, many of them are usually centralized in some manner. For instance, many of the stablecoins in existence have administrative keys. These keys can be used to lock up or pause the tokens at any point. In 0xBitcoin, everything is governed by the smart contract. No one owns or controls the smart contract, nor the 0xBitcoin.

The Solution to the Bitcoin Security Conundrum

Within the BTC community, there is expectation that the last Bitcoin will eventually be mined due to the 21 million hard cap. When that happens, there is a conundrum on how miners will be paid to keep the network running and secure.

There have been suggestions that the BTC hard cap could be lifted to pay for the security of the network. However, that is unlikely to happen. For 0xBitcoin, that is not an issue. The 0xBitcoin tokens exist within the Ethereum blockchain. As a result, Ethereum secures it. To protect from the temptation of increasing the supply, the 0xBitcoin contract was built to be non-upgradable. The tokens are also compatible with Uniswap and other DeFi protocols.

0xBitcoin represents the future of DeFi. It will form an important foundation for the future of the industry. Various characteristics make it a prime candidate for this. For one, it does not rely on any other oracle except the external intrinsic oracle every time new tokens are mined. Also, it does not have an admin key, which ensures that it is fully decentralized.

Other aspects that make it a prime candidate for the future of DeFi are the 21 million hard cap that is guaranteed by a non-upgradable smart contract and native compatibility with all DeFi smart contracts. The 0xBitcoin tokens are available for purchase by the public here. While many other projects have attempted to achieve full decentralization in the DeFi sector, 0xBitcoin appears to be ahead of the pack.

Aibc Gets Back to Business With Limited Free Early Bird Tickets

Early bookings will benefit from a free standard ticket to the AIBC Europe show held in Malta this November, as...