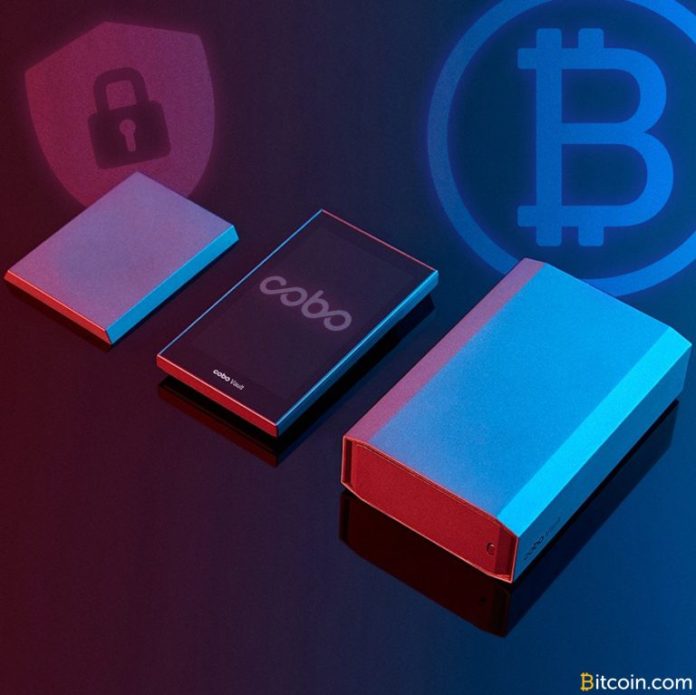 The arms race between hardware wallet manufacturers is showing no signs of abating. Every new device must be more secure, robust and impregnable than its predecessor to claim the bragging rights and earn the shekels of the crypto rich, to whom nothing but the best will do. The Cobo Vault is the latest hardware wallet clamoring to be the best device of its kind.

Also read: Which Cryptocurrency Hardware Wallet is Best for You?

In a Post-Apocalyptic Society, Many Years From Now…

The year is 2140 and the last bitcoin has just been mined. Thanks to the nuclear war, the population has been reduced to a few hundred thousand hardy souls. Bitcoin is the world’s global reserve currency, only there isn’t much world left to fight over. Just some scorched earth, cockroaches and a handful of gunmetal grey objects jutting wilfully from the soil. These are Cobo Vaults, the last surviving hardware wallets in the galaxy.

Hyperbole aside, it’s too early to tell how the Cobo Vault will fare in the longevity stakes. What can be said, in the here and now, is that this is the largest and heaviest hardware wallet (HW) you are likely to own. The Vault has many properties, but portability isn’t one. Unlike, say, the Coolwallet, the Cobo Vault is not designed to leave your strongroom or bank vault. Which is a tougher ask than it might sound, because the Vault is the sort of device you want to show to all your friends. Do not be seduced by the sleek metal casing and seductively heavy touchscreen imploring you to Instagram this wallet. Those aesthetics are for you and you alone to admire. Good opsec is mindset, not a device.

If you’re confident that you can resist the urge to shout your ownership of the Cobo Vault from the rooftops, here’s what you can expect from the $299 device (which will retail for $479 once full production starts):

The Cobo website is replete with video footage of a Vault being plunged into the water and presumably living to tell the tale. Its protective case can also support the weight of a tank, so we’re told. I wasn’t brave enough to test my review device in such a manner, as it wasn’t manufactured to final spec, but like the Cobo Vault, perhaps you’re made of sterner stuff.

Hands on With the Cobo Vault

The Vault is beautifully packaged, with build quality, design, and presentation that almost rivals Ledger, the experts at delivering immaculately packaged wallets. This is the sort of HW that unboxing videos were made for. A small instruction card guides users through setup, in between delivering stern warnings such as “the security chip will self-destruct if tampered with.” Because the Cobo Vault app has yet to be made available on the Google Play store, I had to install it using the link provided, prompting all kinds of scary warnings from Android: Production versions will direct users to the Play or App stores, eliminating this heart-hastening step. After installing the app, you’ll need to power up the Cobo Vault, which means removing the battery compartment and charging it using the separate dock. After powering up the Vault, you’re directed to a page on the Cobo website to scan in the QR code and verify the device. Then, after opting to create a new vault using the touchscreen device, it’s time to note down your mnemonic, heeding the onscreen warning to watch out for “spying eyes or hidden cameras.” Entering the 24-word seed is confusing, as it is unclear that you’re meant to hit return after typing each word. There are still some elements of the Cobo Vault that could benefit from refinement, starting with mnemonic confirmation. Once the seed has been recorded, it’s time for some more QR code scanning, this time to pair the Cobo Vault with the mobile app. When that’s been completed, the mobile app shows a perfunctory wallet screen. BTC and ETH are the only coins supported in the test version, but the full version will ship with support for all of the coins listed earlier including BCH and DASH.

A feature which now comes as standard on many HWs, the Vault included, is the ability to create a hidden vault. If the owner is forced to unlock their wallet under duress, they can reveal an address containing only a nominal amount of cryptocurrency. An unlimited number of hidden vaults can be created with the Cobo Vault, making it impossible for a physical attacker to tell for certain whether they’re being shown the real wallet. To verify that everything’s working correctly, I send a test BTC transaction to the Vault, and then send it on to a different address, using the Vault to sign the transaction using a QR code scan.

With most hardware wallets, the review ends once the mobile wallet and device have been paired, bitcoin address created and test transaction sent. But with the Cobo Vault, the real fun begins when you prepare to pack the device away. The body and battery are separated and slid into separate compartments in the protective case. The case holds the entombed sections snug, without so much as a rattle, no matter how vigorously you shake the ensemble.

One accessory that’s yet to be covered in this review is the mnemonic tablet and letter block that enables you to encase your 24-word seed in a metal holder that looks as robust as the protective case for the Vault itself. It would be nice if there was a means to easily separate the two halves of the tablet, so that the seed could be stored in two separate locations. If you do decide to affix the letters into the tablet, using the screwdriver and 282 letters provided, go ahead, but it might be wise to obfuscate one or more of the words. It might be wiser still to store your mnemonic tablet in a different location to your Cobo Vault.

The Cobo Vault is a solid piece of kit that’s likely to claim the mantle of Toughest in Class, at least within the sensibly priced wallet category. A few hundred bucks seems a reasonable outlay for a device that should, provided proper opsec is used, keep your cryptocurrency safe until time indefinite, or until you need to liquidate it at least. The software could and will be better in places, and the UX needs tidied up. Expect these niggles to have been resolved when the production version begins to ship.

The Cobo Vault will outlive you. The sooner you come to terms with that, the sooner you can accept your own mortality and the immortality of bitcoin.

What are your thoughts on the Cobo Vault? Let us know in the comments section below.

The post The Cobo Vault Hardware Wallet Will Outlive You appeared first on Bitcoin News.