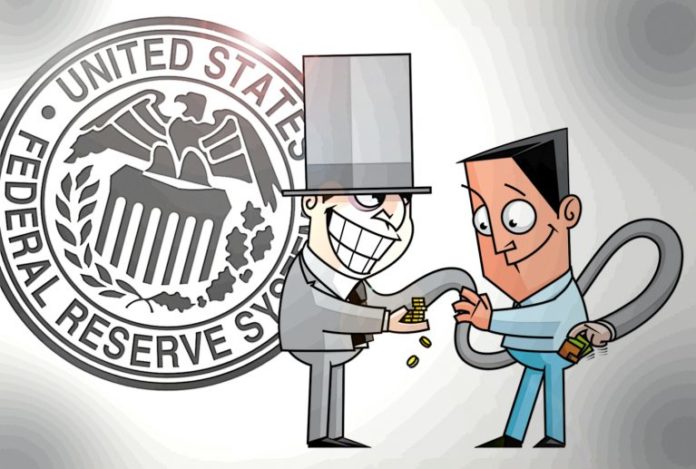 Since mid-September, the Federal Reserve has injected three trillion U.S. dollars into the hands of private banks and Wall Street. Despite the fact that massive amounts of money was created out of thin air, the central bank still believes repurchase agreements (repos) are needed to tame the turbulent economy. Nearly every day the Federal Reserve Bank of New York gives primary lenders billions of dollars. Like clockwork on Tuesday, December 3, the entity introduced another $95.56 billion to private institutions.

Around two and a half months ago, the U.S. Federal Reserve cut interest rates and started creating massive amounts of money using repo operations because of a so-called short-term lending crunch. It started on September 17 at 10 a.m. with a massive $53 billion repo, which was accepted by the NY Fed. The following day, the Fed pumped another $75 billion into private financial markets claiming an “unusually high demand for cash.” When it all started, the Fed made sure to inform the press the move wasn’t another form of quantitative easing (QE). The last time the central bank cut rates and initiated colossal repurchase agreements was 10 years ago after the 2008 financial crisis. Beth Hammack, the Goldman Sachs Group treasurer, told the Wall Street Journal that the “market will be waiting to see if the Fed makes this a more permanent part of the playbook.”

So far it has continued and a mountainous $3 trillion dollars later, the Fed has continued to gift the private banks. A recent video published by Youtuber “The Hated One” reveals how the Fed creates free money for big banks by explaining the subject in great detail. The video emphasizes that private lenders the Fed deals with are either short on reserves or can’t pay their taxes. Now when ordinary folk are short on dough, the banks will repossess their items or foreclose their mortgage. The Hated One underlines the fact that if an average Joe can’t pay their taxes, the IRS will surely come knocking and possibly toss tax offenders in a cage. But the film also highlights that in contrast, when these issues arise for bankers, the fat cats get $3 trillion dollars in freshly created fiat. While all these funds are being distributed by the Fed on a daily basis, the narrator remarks:

GDP growth is slowing down, inflation rates are teetering, U.S. manufacturing is shrinking, Treasury yields are irreversibly going down, wages are stagnant, the Federal Reserve is lowering interest rates, household prices are rising as all the strong identifiers of an economic downturn are pointing in the same direction. But somehow earnings of the top 1% and stock prices are going up.

The video goes on to detail how the entire economy is rigged against working-class citizens and a true free market in order “to favor speculators and their currency manipulation.” After the stimulus injections are given to certain financial entities, common people can gain access to these funds in the form of loans and by accruing more debt. Even though the same financial incumbents were seemingly broke or couldn’t pay their taxes, they are more than willing to lend the freshly created dollars with interest. As the money supply grows with daily creation, massive amounts of emerging funds typically eat away at an ordinary citizen’s purchasing power.

A great number of economists call state-induced inflation “legalized robbery” that’s likely more damaging than taxes. In 2006, the Future of Freedom Foundation author Gregory Bresiger gave his readers a “proper understanding of what inflation is.” “[Inflation] is the debasement of fiat currency through the overprinting of money without any stated limits — there is only one party responsible: the government’s banking authority.”

Bresiger and other economists have stressed that the victim is the average citizen who is required by law to follow legal-tender guidelines. Taxation is far more noticeable than inflation and a majority of people don’t notice the silent robbery of purchasing power until years later. This is usually when they reminisce about the cost of a loaf of bread compared to today’s prices. Central banks like the Fed act like inflation is ‘natural,’ but in fact the banking authority behind legal tender is the root cause of cost-push inflation. In Bresiger’s opinion, this fact highlights that “inflation is a tax, because only the government creates money.” Bresiger adds:

You don’t see the costs of inflation listed on a pay stub but its fearsome power eats away at your income. It is the sneakiest tax because most Americans don’t understand who or what causes it and why. Therefore, I believe, inflation is the greatest, most effective, form of robbery in history.

Free market advocates, cryptocurrency proponents, Austrian economists and people who are tired of the manipulation understand the state and the country’s banking authority ignores private property rights and confiscates the average citizen’s wealth arbitrarily. Much like the American rally cry that there is no “taxation without representation,” freedom activists believe there should be no “inflation without representation.” There is zero representation when it comes to inflation in the U.S. and the central bank makes monetary choices without any accountability. Even with the repurchase agreements shown on the balance sheet, the Fed has been accused of creating way more money than what’s written in the books. 2013 reports indicate that the Fed created $9 trillion dollars of “off-balance-sheet” money and they don’t have a clue where the money went.

When the NY Fed gave $95.56 billion to private institutions on Tuesday, only private members of the Fed board were in charge of monetary policy-making. No ordinary American citizen had any say in the stimulus injection and they will never get to vote on the most important part of society. However, strong believers in laissez-faire wholeheartedly believe that there are tools that can be used to combat the banking authority’s system through counter-economics. Tools like cryptocurrencies, precious metals, and participating in barter and trade allow individuals to remove themselves from state-induced inflation, taxation without representation, never-ending wars, and the intrusive surveillance of people’s monetary affairs.

The post The Fed’s Money Creation System Is Fueling One of the Biggest Heists in History appeared first on Bitcoin News.

The Many Facts Pointing to Shinichi Being Satoshi

A lesser known, yet uniquely compelling candidate for the real Satoshi Nakamoto is Japanese mathematician and number theorist Shinichi Mochizuki....