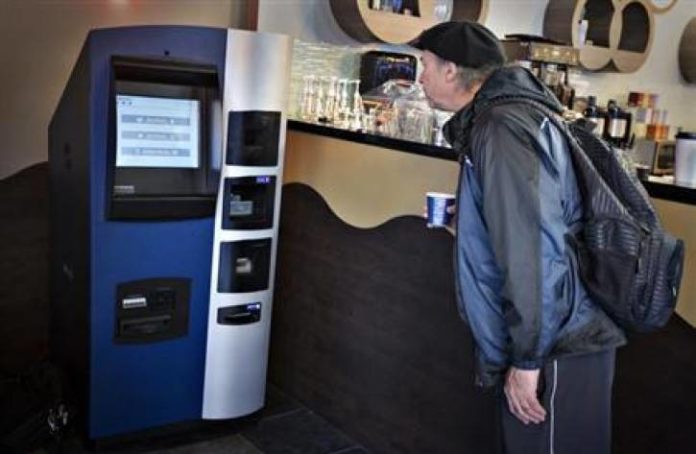 During the first week new Bitcoin ATM in Vancouver got its impressive fast start and operated transactions that are worth over $100,000 (Canadian). Jordan Kelley, the CEO in Robocoin company belives that company and its new ATM generally increase bitcoin accessibility for customers. According to the data, most of the people who used ATM during the week were new bitcoin users, about 80% of people bought digital currency, the other 20% – were customers who wanted to sell their bitcoins for cash.

The first bitcoin ARM is owned by Bitcoiniac startup. For now it bought four more bitcoin machines to deploy them in London, Berlin, Toronto and Montreal. Bitcoin ATM is also equipped with camera and palm scanner. All customers who have created a bitcoin account, which is approved by the management company, he or she can bye bitcoins or exchange them into cash. A fee for digital currency transactions range 3% to 5%.

Bitcoin become extremely popular in Vancouver. Soon it may become one of Bitcoin capitals and even overtake Berlin, where there is a Bitcoin – district. Today you can taste the Indian or Chinese cuisine, get designer services, buy insurance, take music lessons or even have a massage in Canada for bitcoins. Moreover, the Canadian government agency responsible for the control of cash flow, reported that there will be no special regulation of Bitcoin companies.

Time will tell how exactly new Robocoin machines effect on digital currency popularity. At the moment, any innovation in bitcoin segment of the market has a positive effect on its growth. Robocoin company is ready to create more bitcoin exchange machine and sell them to major cities all around the world. Today company has orders from Boston, Los Angeles, and San Francisco, waiting to get bitcoin ATM in the beginning of 2014.

Yuval Ben-Itzhak, CTO at security software company AVG, said: “Ransom malware has been around in different variations since the early...