Finance Magnates visited Tel Aviv-based fintech center The Floor on Monday to check out its newest initiative, the ‘Blockchain Factory’.

Established two years ago, The Floor‘s purpose is to make connections between Israeli financial technology startups and established banks. The Floor itself counts HSBC, Santander, and Intel among its partners, with Intel even maintaining a presence in the center’s office.

Blockchain Factory, the center’s most recent brainchild, is a development program for blockchain-based startups, several of which arrived during our visit to pitch their business models in the hope of being accepted as members. 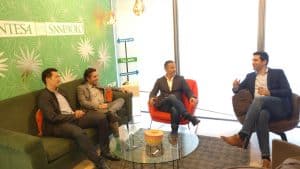 Gil Devora, co-founder of The Floor, told Finance Magnates that the center usually accepts only late-stage companies to work with, but it has made an exception for operations that deal with blockchain technology, because late stage blockchain companies are relatively rare on the ground, the industry being as new as it is.

Moises Cohen, another co-founder, predicted in an interview with Finance Magnates last year that “ten years from now there will be 500 blockchain startups in Israel.”

A year ago, one of The Floor’s member companies Bancor raised 153 million USD in an ICO that attracted global attention. The Floor served on Bancor‘s Advisory Board and this achievement prompted The Floor’s strategic thinking around Blockchain opportunities for the financial industry.

Another example of a blockchain company with a presence at The Floor is Blackmoon, which “provides a tokenization platform for real-world as well as crypto investment funds”, according to its website.

Finance Magnates also discovered that the hub is looking to expand to Asia, as it wants to establish relationships with financial institutions. It already has a branch in Hong Kong, a plan that we reported on last year. Devora told us that a new center in Shanghai is already being planned, and the hub intends to open a branch in India after that.

The Floor hired Desmond Marshall three months ago to act to the role of Country MD. Hailing from Hong Kong, Marshall has acted as ICO advisor for more than twenty different companies according to his LinkedIn profile. He is also a member of the Ethereum Alliance and spent three years as a regional manager for Microsoft.