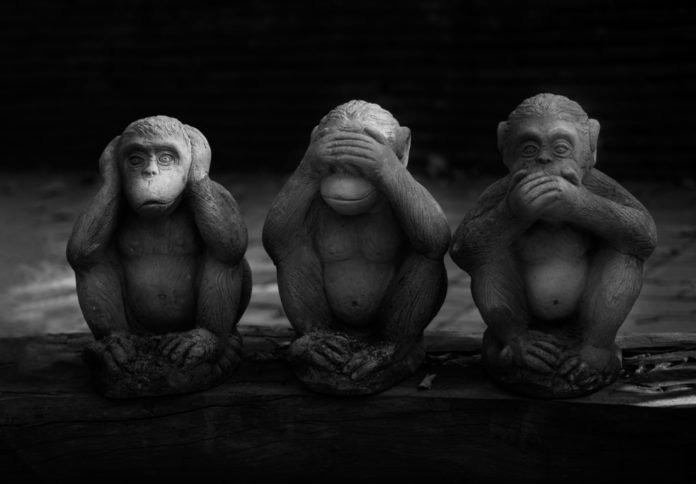 John McAfee predicted that the Bitcoin price in 2020 will be $ 1 million. On Twitter, he constantly railed against HitBTC and even in the hospital does not stop to promote selected ICOs. But who is he, this self-proclaimed “god of cybersecurity”? A glimpse into the miraculous life of John McAfee: how to become a millionaire through paranoia.

In 1987, shortly after the supposedly first computer virus “Brain” spread, a self-proclaimed “computer doctor” drove through the USA in a caravan. He repaired infected PCs, his company was called “McAfee Anti-Virus Paramedic Unit”. On call you could order the computer paramedics and on top of that a program to install – it was called VirusScan. The man who drove the caravan and cared for the safety of the people once said:

“You can not trust anyone. This has nothing to do with cynicism. I trust people are human and selfish. If you understand that, you can use it. “

And that’s what John McAfee did in every imaginable way. Even before he became a traveling computer doctor, he earned his money with false magazine subscriptions. He then applied with fake diplomas at Missouri Pacific Railroad. There he was then responsible for the optimization of train lines. And experimented by the way – less successful – with LSD and DMT. Until he had to flee:

“People asked him questions, but he did not understand what they said. The computer spit train schedules without end, for him it all made no sense. He then ended up behind a garbage zone in Downtown St. Louis, hearing voices, hoping no one would look at him. He never went back to Missouri Pacific. Part of him thinks he is still on this trip. That everything is a huge hallucination since then and he wakes up one day. Still on his couch in St. Louis with Pink Floyd’s Dark Side of the Moon in his ear. “

Through paranoia to the millionaire

It was the sheer paranoia that drove him from St. Louis to Silicon Valley. But the mistrust that eventually turned into paranoia was deeply rooted in McAfee. Already at home, the young John lacked confidence: his father was an alcoholic who took his own life when John was fifteen – a story that McAfee repeatedly mentions. But it was also his mistrust that brought him wealth – because with the computer revolution in the 80s came the viruses. And with it McAfee’s success. The AntiViren program, which he claims to have programmed in 1.5 hours, made him a millionaire. The associated company he should have sold for $ 100 million. In an interview with ABC News, he said the $ 100 million was still understated:

He built nine houses with the money, filled with works of art, amassed a fleet of antique cars and, as a “New Age guru”, held a yoga retreat in Colorado. In the wake of the financial crisis, however, he should have lost a large part of his assets.

The escape to Belize

He then moved to Belize – a state in Central America known for crimes rarely or never solved. If everything is told in the Netflix production “Gringo”, McAfee’s life became even more turbulent there. Officially, he built a laboratory there to make a natural antibiotic. Unofficially, the picture is much gloomier that “gringo” draws from him. He is said to have operated a crystal-meth kitchen there and employed hitmen to protect it. The microbiologist, who was employed there for a short time, he should have raped. On top of that, he should still be responsible for the death of his neighbor. Because he allegedly poisoned his dogs.

When he later got into police control (because he was driving under the visible influence of Xanax Auto), he said:

“I’m the guy charged with murder in Belize. Then I left for Guatemala and fled to America, where I lived for three years. The FBI is looking for me. […] I am something like the god of cybersecurity. “

This paranoid god of cyber security was hospitalized for some time in June 2018. Apparently a poison attack was perpetrated on him – but his opponents were “too incompetent”: 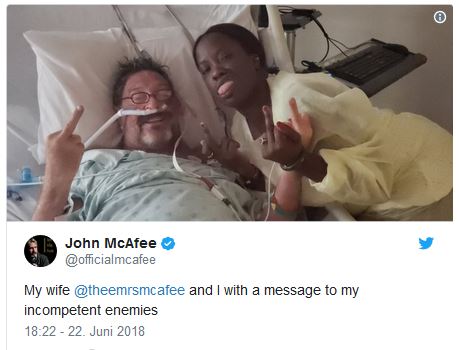 From Security God to US President?

McAfee used this opportunity immediately to promote his current project – only thanks to Docademic he would have received timely medical care. But this is not the only project the god of cybersecurity is currently working on. With Cryptoslate he fights for a better world and claims to have developed the safest wallet in the world. In addition, John McAfee intends to issue his own fiat currency. On top of that, he wants to become President of the United States of America in 2020. Until then, the Bitcoin price should stand at $ 1,000,000. Otherwise, the first official act as president becomes rather unappetizing.