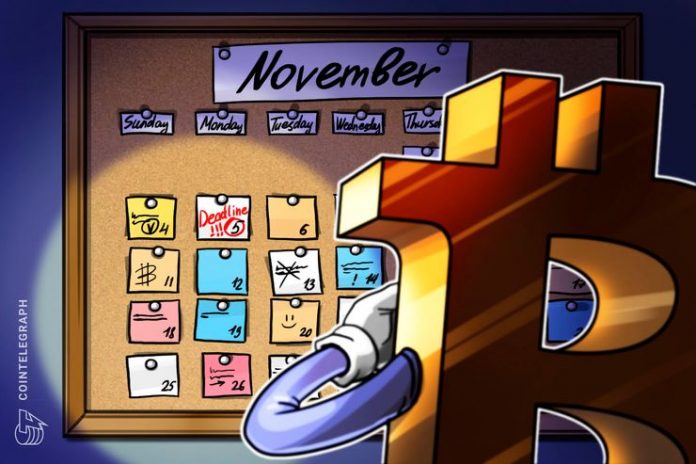 On November 5, 2018, part of crypto community was expecting to hear an official decision from the US Securities and Exchange Commission (SEC) regarding nine Bitcoin (BTC) exchange-traded funds (ETFs).

The statement never came, however, as November 5 was in fact the deadline for the public to submit their comments to the SEC to help the agency review the case. Here’s what you should know about the current situation with crypto-related ETFs in the US.

What are Bitcoin ETFs?

Cointelegraph has previously covered ETFs and why they are important for mass adoption in detail. Basically, an ETF is a kind of investment fund that is tied to the price of an underlying asset — a commodity, an index, bonds or a basket of assets — like an index fund and is traded on exchanges, available to both retail and institutional investors.

A Bitcoin ETF, in turn, tracks Bitcoin as the underlying asset. It is an indirect way of purchasing BTC, where the investor only holds the corresponding security without having to store the actual coins. If listed on a regulated US exchange, it could pave the way for large mainstream investors, potentially pushing Bitcoin toward broader recognition on Wall Street.

On August 22, the SEC rejected a total of nine applications of various Bitcoin ETFs from three different applicants. Two were submitted by ProShares in conjunction with the New York Stock Exchange (NYSE) ETF exchange NYSE Arca, five were presented by Direxion, and the remaining two introduced by GraniteShares.

Explaining its decision to deny the proposals, the SEC cited the Bitcoin futures as ‘insignificant’ in size, and the possibility of ‘fraudulent and manipulative acts and practices’, among other factors, in all of the three refusals:

“[…] the Exchange has offered no record evidence to demonstrate that Bitcoin futures markets are ‘markets of significant size.’ That failure is critical because, as explained below, the Exchange has failed to establish that other means to prevent fraudulent and manipulative acts and practices will be sufficient, and therefore surveillance-sharing with a regulated market of significant size related to bitcoin is necessary.”

However, on August 23, the agency made a U-turn and stated that it would review its decision of all nine ETFs in the future. More specifically, SEC Commissioner Hester M. Peirce took to Twitter to explain that the resolution was reached by SEC officials who had been delegated with the task by Chairman and Commissioners, who then decided to reassess their action.

Commissioner Peirce interfered after previous SEC decisions on crypto ETFs as well. On July 26, soon after the SEC’s rejection of the Winklevoss brothers’ application for a Bitcoin ETF, the Commissioner Peirce released a statement, where she opined that the agency’s move “sends a strong signal that innovation is unwelcome in our markets, a signal that may have effects far beyond the fate of Bitcoin ETPs.” Moreover, she claimed that the agency overstepped “its limited role” because it focused on the nature of the underlying BTC market instead of the derivative itself.

The deadline was for public comments, not the decision per se

On October 4, the regulator issued a corrected order scheduling filing on the initially rejected nine crypto ETFs, where it clarified that “by November 5, 2018, any party or other person may file a statement in support of, or in opposition to, the action made pursuant to delegated authority.”

It is a common practice for the SEC to ask the public to weigh in — for instance, the regulator had received more than 1,300 comments on the proposed rule change to list and trade shares of the VanEck SolidX ETF, and then requested even more.

Nevertheless, some community members were confused by a rumor that November 5 was the deadline for the SEC decision per se, and expected the agency to publish a statement. Decisions on ETFs are important for the community, because a greenlight from the regulators in such cases might add a lot of legitimacy to the crypto market.

The hearsay was unintentionally ignited by some opinion leaders on Twitter, including, among others, CNBC CryptoTrader host Ran NeuNer, who later recognized he was incorrect.

Will the SEC approve those ETFs?

Not likely, but there is always a chance. The agency have been declining all crypto-related ETFs since March 2017, when it rejected the first one, a Bitcoin ETF run by the Winklevoss twins. The decision was based on concerns “that significant markets for Bitcoin are unregulated.”

Apart from this batch, one of the most promising ETFs is the one powered by investment firm VanEck and financial service company SolidX with an additional emphasis on insurance: the VanEck SolidX Bitcoin ETF is derivative-backed, according to its press release, implying that the firms will actually hold BTC. This will allegedly protect against the loss or theft of the cryptocurrency, which might be an important factor for the SEC.

Whilst there is no definite deadline for the nine Bitcoin ETFs in question, the VanEck SolidX Bitcoin ETF will reportedly be reviewed by the watchdog until February 2019. By that time, the industry might be more prepared for the SEC scrutiny. Thus, CNBC crypto analyst Brian Kelly previously argued that, according to statistics from Chicago Mercantile Exchange (CME) derivatives marketplace, the futures market is evolving quickly and that we will likely “have a much better shot” at Bitcoin ETF approval by next year:

“Here’s CME Futures open interest of large holders. [As of] April, you’re starting to see a big increase […] about an 85 percent growth rate. If you extrapolate that out, by February 2019, you’re going to have a very robust market here.”