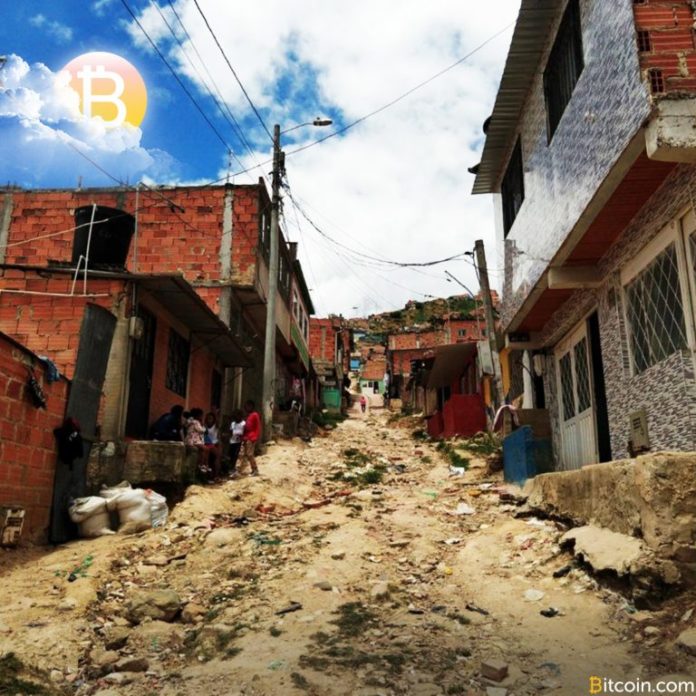 How cryptocurrency can help the unbanked has been a hot topic over the past 12 months. It is a laudable goal, but one that it is by no means easy to accomplish. One tech enthusiast and stablecoin startup employee, Steven Gilbert, experienced the struggles – and successes – of attempting to do so when he went to one of the poorest neighborhoods in Bogota, Colombia to encourage adoption.

Also read: Why Colombia Has Become a Hotspot for Bitcoin ATMs

Inspired by a hurricane relief project in Puerto Rico he took part in, Steven Gilbert wanted to do something else charitable but this time related to one of his passions – cryptocurrency. Living in Colombia’s capital city of Bogota, the 30-year-old decided to help the needy in a poor, generally out of bounds area in the south of the city. There, he wanted to introduce the benefits of cryptocurrency to people who didn’t have bank accounts as part of an experiment. “I was interested in visiting this neighborhood which is largely unbanked and poor, and seeing how they would receive the idea of crypto. The takeaway was that they were interested,” he told news.Bitcoin.com. Steven, who is director of international operations at Reserve and now lives in California, went to the Ciudad Bolivar neighborhood and donated some of his own cash to nine families – 44 people in total – living there. He met them by visiting a community centre that helps displaced people in Colombia. Most of the people he spoke to had phones, but no bank accounts, so he was able to show them Breadwallet and from there give them ethereum – 1 ETH apiece, approximately $131.

Steven also embarked on a mission to educate the local people, who live far away from the banks and financial opportunities to be found in central Bogota, about the benefits of cryptocurrency, and how it can help them. “With one old woman, I scanned the QR code, made the transfer and she could could see how much it was in pesos. She asked me, ‘Is that really what it’s worth?’ Her face lit up when I told her it was. She was fascinated to have digital cash,” he recalled. The Difficulties of Execution

But there were a number of problems. Steven said that despite the enthusiasm among the community, the biggest issue was getting them to use the crypto. “I was trying really hard to get a merchant in the community to get them to use [crypto],” he said. “I was like ‘hey, I’m donating this money to a community, as part of an experiment it would be awesome if the people could use it.’” Despite managing to convince residents to download wallets – many had heard of Bitcoin so had a rough understanding what crypto was – the shopkeepers were harder to sway: “The merchants I spoke with in Ciudad Bolivar hadn’t heard of bitcoin or other cryptocurrencies, so I was starting from square one in terms of educating them. If I had more time, I’m confident I could have brought several merchants onboard but I was time constrained because I was leaving Colombia.” When Steven did leave, he left them with the knowledge of Localbitcoin.com and of Bogota’s many crypto ATMs. He also left them with a list of stores and restaurants that accept the cryptocurrency. He said: “The main thing was education. At minimum I wanted to see how they would receive crypto. The biggest benefit is a lot of these people don’t have bank accounts, they’re not tapped into the banking system, so one really cool thing about crypto is you don’t need anyone’s permission to download a crypto wallet. Once you know how to do it, you’re effectively banked.” Other difficulties included the logistics of introducing crypto to just a small section of a neighborhood. “The area was dangerous, I could only be there in the daytime. I would have done more training workshops but because I wasn’t giving it to the entire neighborhood – only a handful of households – it could’ve created tensions,” he said.
But Steven said that despite the difficulties of performing the experiment solo, it was easy enough to introduce unbanked people to cryptocurrency and get them enthusiastic about the concept. Since starting a role that specializes in introducing crypto to countries that struggle with hyperinflation, he added that all it would take is a bit of extra manpower and resources. “These people were very interested and excited at being part of a financial system. They were very open to the idea and I think we could get entire communities using crypto in the future.”

The post The Struggles and Successes of Introducing Crypto to the Unbanked: A Social Experiment in Colombia appeared first on Bitcoin News.