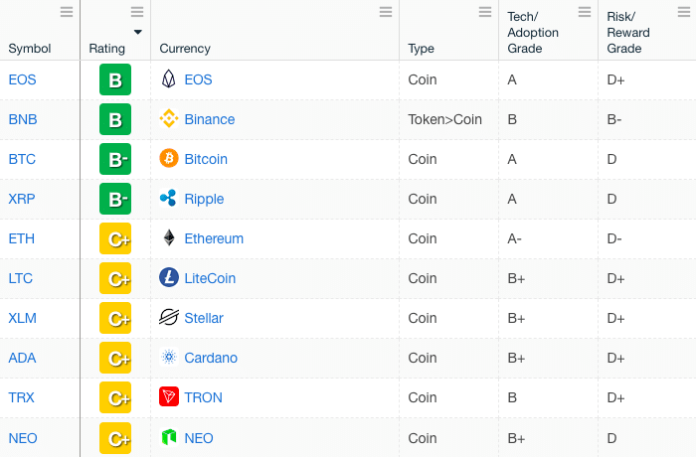 Every quarter or so, crypto followers enthusiastically plaster the Weiss Cryptocurrency Ratings across Twitter, Reddit threads and Facebook blockchain groups. Often they use it to justify their specific view on why x coin sucks or why y token is better than the rest. However, for the reasons we outline below, there’s no reason for you to follow these ratings at all. Except for your amusement, of course.

What Are the Weiss Cryptocurrency Ratings?

The Weiss Cryptocurrency Ratings grade different cryptocurrencies on an A to F scale according to their risk, reward, technology and adoption. Like school grades, A is the best rating while F is the worst.

The project’s operator, Weiss Ratings, has been rating traditional finance investments (stocks, mutual funds) and institutions (banks, credit unions) since 1971. Now, the company has branched into cryptocurrency. The Weiss Ratings team takes pride in having no sponsors and accepting no advertising from issuers.

How Do the Ratings Work?

The ratings are split into two categories, which, in turn, have two distinct parts:

Weiss first calculates the tech, adoption, risk and reward scores separately using hidden, proprietary models. From there, they give weight to each number and combine them to formulate letter grades for the above categories. Finally, the team produces an overall rating for the coin based on the score from all of the models.

Weiss recalculates the cryptocurrency ratings every week. As of this writing, these are the top ten cryptocurrencies:

Why You Should Ignore the Weiss Cryptocurrency Ratings

The Ranking System Is Too Vague

The Weiss team is somewhat secretive about the methods they use to calculate each category’s score. Although, they describe what factors contribute to each category, they don’t outline their weight or use in the overall calculation.

Let’s take a look at the wording directly on the Weiss Cryptocurrency Ratings website:

“Each of these models is appropriately weighted, compared and then evaluated in terms of how it interacts with the other three models systemically. The end result of the analytical process is the Weiss Cryptocurrency Rating.”

Doesn’t really explain much, does it? Although, the Weiss team claims that they remain objective, it’s impossible to know with their methodology under wraps.

Tech and adoption go together about as well as peanut butter and onions. Lumping these two categories into one grade makes no sense.

Throughout history, there have been plenty of technically sophisticated ideas that obtained zero adoption (3-D televisions). And there’s an endless list of technically simple ideas that have garnered mass appeal (Tinder). The same is true in cryptocurrency.

Thankfully, the Risk/Reward grade does a slightly better job of combining semi-similar scoring factors. While risk measures the volatility of the cryptocurrency’s price, reward measures historical returns in comparison to specific benchmarks. This strategy still has its issues, however.

Almost all of the cryptocurrencies currently have a D+ or lower Risk/Reward grade. These poor grades demonstrate that the Weiss Cryptocurrency Ratings presumably weigh the risks of investing higher than the potential reward.

To keep things simple, let’s limit this examination to the top 20 coins. Although, there are surely more examples.

As a reminder, the factors comprising the Tech/Adoption grade include decentralization, governance capabilities, real-world network security and decentralization (once again). You can be the judge on if those grades make sense.

On the Risk/Reward side, Ethereum receives a D- grade, just a couple steps above a dead project. It’s odd that cryptocurrencies like Binance Coin (B-), Holo (C-) and OmiseGo (D) have a better Risk/Reward grade considering they all depend on the success of Ethereum.

Weiss does admit that the Risk/Reward grade focuses on the short-term, but listing Binance Coin as one of the few B- grade coins seemingly because it’s performed well this month seems FOMO-driven.

This one needs no explanation. There’s no reason why the cryptocurrency with the highest adoption, most robust security to date and longest history shouldn’t be number one.

The Number One Rule

Take any cryptocurrency ranking, review, etc., with a grain of salt. It’s impossible to eradicate bias from them, and you never know what the author’s motivations truly are. Stay skeptical of everything you read and double-check any information presented as fact.

You may have a differing opinion about the Weiss Cryptocurrency Ratings. That’s fine. Even if you agree with their scores and methodology, it shouldn’t be your only crypto source. The best investment strategies involve reading multiple sources from authors with varying opinions.

In the end, though, the best source is yourself. So, as always, the most sound advice we can give is to always do your own research (DYOR).

The post The Weiss Cryptocurrency Ratings Are a Bunch of BS appeared first on CoinCentral.

Some few weeks back, the news of the then yet to be released Samsung Galaxy S10 having an inbuilt crypto...