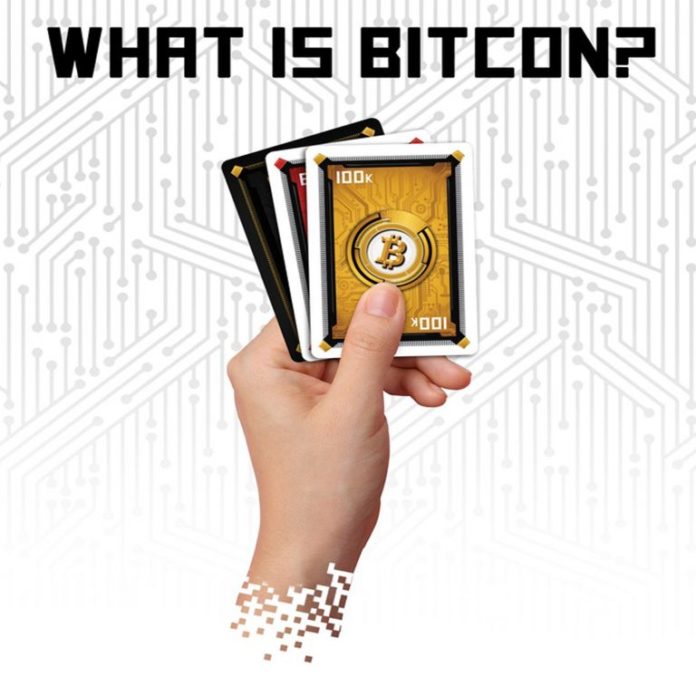 There’s a new card game called ‘Bitcon’ that’s been introduced on Kickstarter that allows people to experience the cryptocurrency investment fever for amusement and laughs. The strategy game was created by two cryptocurrency investors who were tired of hearing about people doing unbelievable things like selling their home or using their student loan money to go ‘all in’ on a portfolio of digital assets.

Win Big or Lose it All Playin ‘Bitcon’

Two guys named Brandon and Sam who call themselves the ‘two stupid investors,’ created a tabletop card game that replicates cryptocurrency investing called ‘Bitcon.’ Basically, players are dealt a hand of five cards each and players draw cards in sequence to find out if the market goes up or down, or maybe even collapse. Alongside cards that move the market, there are also other action cards like the ‘Reverse the Market’ card which changes the direction of the current market trend. There’s also the ‘Cash Out’ card which can enable a player to cash out and cause the next player to pick up the remaining cards. Moreover, each deck of Bitcon cards has three ‘Pop’ cards — a card that serves as market collapse warning and when the last card is used the bitcoin market crashes and the game ends. “If you like fast-paced strategy games, laugh at people that sold their house to buy bitcoin, or simply want to show grandma how to lose all your cash online,” explains the creators of Bitcon.

Buy Bitcon — You’ll soon be addicted to losing all your money.

The Bitcon creators say they wanted to create a game that allows the “thrills of being a big money investor with zero risks.” According to the Kickstarter campaign, a Bitcon strategy tournament can be roughly fifteen minutes of gameplay.

“Bitcon is our perfect representation of what it feels like riding markets up and down, using strategy to protect yourself but also attack opponents, and be ready to cash out your position before your investment is fully lost,”

Its 15 minutes of pure strategy, pace, and gambling. Betting addicts we’ve found you a solution.

Bitcon is not the first Kickstarter card game campaign featuring a bitcoin-esque theme as news.Bitcoin.com reported on Bitcoin Empire back in January of 2017. The game featured many cryptocurrency luminaries within the industry and even a Pepe the frog playing card. However, the Bitcoin Empire funding on Kickstarter was unsuccessful as the team didn’t meet the £5,000 goal.

What do you think about the Bitcon card game? Let us know your thoughts on this subject in the comments below.

Images via the Bitcon Kickstarter campaign.

Did you know Bitcoin.com has an awesome podcast network? Check out the ‘This Week in Bitcoin’ series and ‘Humans of Bitcoin’ by listening to our very own podcast.