Bitcoin Looks As It Did Prior to 2017’s Rally, Crucial On-Chain Indicator Shows

Hans Hauge of Ikigai, a cryptocurrency fund, recently noted that Bitcoin’s long-term trend is still one of growth.

He posted the chart below on September 16th, which shows that BTC’s Reserve Risk is currently in a consolidation formation similar to the one that preceded the 2017 rally from under $1,000 to $20,000:

Other on-chain trends also suggest that Bitcoin is on the verge of a longer-term growth trend.

Willy Woo, a noted on-chain and technical analyst, shared the chart below on September 14th. It shows that BTC has a “lot of room for growth in this cycle.”

“Another impulse of coins changing hands has completed, the next directional move over the coming weeks is likely upwards. It’s very unlikely we’ll see any kind of a catastrophic dump in price from here. […] Overall, I’m not expecting any mega dump, some chance of smaller whipsaws in the short timeframes, resistance is teetering. Not a bad time to get in if you’re a spot investor, given the longer range macro. There’s plenty of buy support below 10k, this is a buy the dip scenario.” 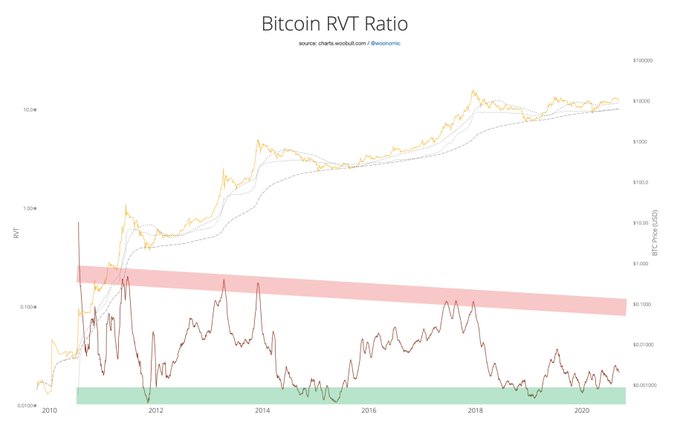 Don’t Count Out One Final Drop

Analysts aren’t counting out a situation where Bitcoin undergoes one final correction, though.

Willy Woo stated on BTC’s potential to fill the CME futures gap in the high-$9,000s:

“I’m still cautious of another short term dump to fill the gap but so far it’s looking like it’s been front run for liquidity which is strongly bullish if we break resistance here. There’s a lot of bids in the spot orderbooks wanting to snap up the gap in the mid-high 9000s.”

Others have shared a similar sentiment, noting how Bitcoin falling and bouncing off the low-$9,000s would actually mark a bullish retest as opposed to a bearish breakdown.