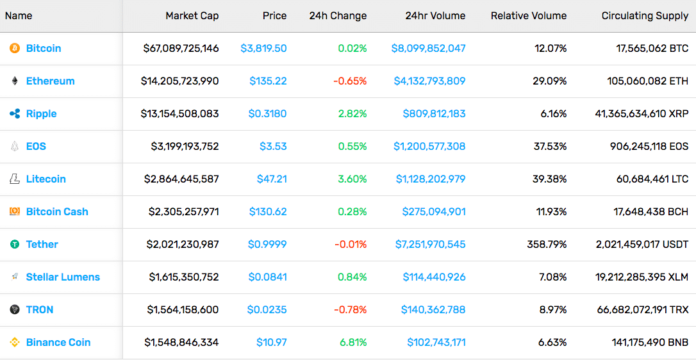 Two Steps Forward, One Step Back

Every week can’t be a good week. After a month of almost exclusively green weeks, we finally saw a pullback in the market. After reaching a peak of about $144B on Saturday, the market cap steeply fell and is currently flatlining at just over $130.7B. This drop leaves us with around a three percent market decline since last Friday. Not great but not terrible, either.

A few altcoins remained entirely unaffected by the market. The Ontology (ONT) price moved 15.68%, Basic Attention Token (BAT) rose 20.15%, and Enjin Coin (ENJ) nearly doubled (98.52%) in price on rumors that the project has partnered with Samsung for the Galaxy S10’s crypto wallet. As for our top three:

Bitcoin fell 2.89% this week but is up about 11 percent in February.

XRP stayed about the same, shaving only 0.61% off its price.

Nasdaq Crypto Indices Go Live: Just a couple weeks after announcing plans for crypto indices, Nasdaq has launched BLX (Bitcoin) and ELX (Ethereum) Liquidity Indices on their platform. The indices are powered by Brave New Coin, combining qualitative and quantitative data. The indices update every 30 seconds, using trading volume and order book depth among other factors to calculate the price.

With the new indices, Nasdaq is aiming to add transparency into the crypto asset market. Hopefully doing so will finally convince regulators that the market is mature enough to approve the long-coveted Bitcoin ETF.

Square Brings in the Bitcoin Big Bucks: The company behind Cash App, Square, filed its 2018 annual earnings report this week, and boy oh boy, what a year it had. The company earned $464 million of adjusted revenue in Q4, a 64 percent increase from last year. However, growth may be slowing for the payments platform. The company grew its revenue by 53 percent over the year, which seems solid. However, Wall Street analysts were expecting 60 percent growth, causing the stock price to dip slightly after the earnings release.

On a positive crypto note, bitcoin purchases steadily grew over 2018. The company realized $37 million, $43 million, and $52 million in bitcoin sales in Q1, Q2, and Q3, respectively. Square CEO Jack Dorsey has long been a public advocate of Bitcoin and has even hinted to Lightning Network transactions entering Square Cash soon.

The Woz Tinkers: In an interview with Bloomberg this week, Apple co-founder Steve Wozniak commented on the current Bitcoin market. He claims that although he sold most of his holdings near the top (Sure, Woz…), he still tinkers with Bitcoin and believes that we’ve seen “massive value creation” from it in the past couple years.

Bitcoin Travel and Transport: Can Blockchain Evolve How We Get Around?: Traveling around the world with bitcoin alone is entirely possible. We lay out the tools that make it possible.

Can Blockchain Climate Change Initiatives Help Fight Global Warming?: There are more climate change organizations than you would think tapping into blockchain for their missions.

Will Rakuten Join Newegg and Shopify in Accepting Crypto Payments?: It looks as if Rakuten may be the next e-commerce giant to implement crypto payments.

Are Blockchain Mutual Funds the Future of Investing?: Diversify your risk and pay lower fees? Sounds like a win-win to us.

Confused by Crypto? Here’s a Guide to Bitcoin for Dummies: Want to learn how a blockchain works? Not sure what exactly a bitcoin is? We take it back to basics with our ELI5 guide.

Survey Says…Blockchain Engineers: It’s comforting to know that even in a bear market, the need for blockchain specialists is higher than ever. According to a recently released report by Hired, the global demand for blockchain engineers is up over 500 percent this year. This growth percentage dwarfs that of security engineers, coming in at second place with 132 percent growth. On top of their massive demand, blockchain engineers are pulling in some of the highest salaries among their peers. With an average annual salary of $137k (in NYC), they are second only to gaming engineers who receive an average of $147k each year.

The job recruitment site attributes the growth in blockchain demand and salaries to “its countless use cases, from digital identity and smart contracts to workforce management and distributed data storage.”

A True Story of Bitcoin’s Value in Venezuela: Not so much news, but a New York Times opinion piece regarding Bitcoin in Venezuela made the social media rounds this week. In it, Carlos Hernández, a Venezuelan economist, shares his experience in a country in economic collapse. He explains how owning bolivars, Venezuela’s national currency, is “financial suicide.” The collapsing currency saw an annual inflation rate of 1,700,000 percent in 2018.

In order to protect his wealth from the nation’s hyperinflation, he keeps his assets in bitcoin. Due to the Venezuelan government’s strict currency controls, Hernández is unable to access foreign currencies. So, Bitcoin is his only option. He asserts, “‘Borderless money’ is more than a buzzword for those of us who live in a collapsing economy and a collapsing dictatorship.”In an industry filled with talk of lambos and the moon, it’s important to remember the true value of Bitcoin and the people it’s helping the most.

The post This Week in Cryptocurrency: March 1, 2019 appeared first on CoinCentral.