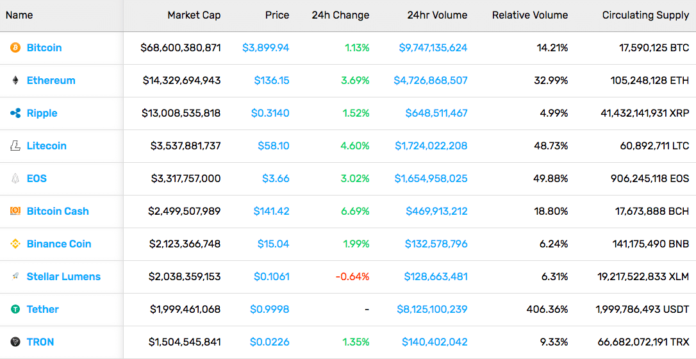 A relatively boring week for our top three:

The Taller the Pyramid, the Further the Fall: OneCoin leader Konstantin Ignatov was arrested at the Los Angelos International Airport last Friday and promptly charged with numerous accounts of fraud. Ignatov and his sister ran a cryptocurrency pyramid scheme in which they stole billions of dollars from investors.

Starting the Bulgarian company in 2014, the two rewarded users through a multi-level marketing campaign for recruiting additional people to purchase “cryptocurrency packages.” However, OneCoin didn’t actually use a blockchain, falsified mining, and internally set a price for the coin without regard to supply and demand.

FBI Assistant Director-in-Charge William Sweeney, Jr. comments on the matter, “Unlike authentic cryptocurrencies, which maintain records of their investors’ transaction history, OneCoin had no real value. It offered investors no method of tracing their money, and it could not be used to purchase anything.” Sounds like a few other cryptocurrencies we know…

Security? What Security?: Oh, happy day – a little regulatory clarity! Colorado officially passed the Colorado Digital Token Act late last week. The new law effectively states that digital tokens with a consumptive primary purpose are not considered securities in the state of Colorado. So, if you’re creating a utility token, you should be in the clear.

There are a few stipulations, however. You need to file a notice of intent with the securities commissioner. You can’t promote the token as an investment vehicle (duh). And, you need to have the cryptocurrency network built before selling the token. There are a few exceptions to these rules, but that’s the gist of it.

Crypto Goes Hollywood: Seemingly created as a 2017 bull-run cash grab with a poor sense of timing, the cleverly named Crypto released a trailer this week. With a star-studded cast consisting of Luke Hemsworth, Kurt Russel, and the ever-popular Annalé, you won’t want to miss it.

A History of Bitcoin and Cryptocurrency’s Most Illuminating Moments [Infographic]: Want to know Bitcoin’s history but pressed for time? We’ve got you covered.

Bitcoin Legal Issues | Important Cases You Should Watch: Much of crypto is like the wild wild west, but that hasn’t saved these defendants from the long arm of the law.

[SPONSORED] What is TaxBit? How Does Crypto Tax Automation Work?: Harvest those 2018 bear market losses automatically with this new tax platform.

The Basel Committee Preaches No-Coinery: On Wednesday, the Basel Committee on Banking Supervision, an international supervisory group, released a statement on “crypto-assets.” They specifically refrained from using the word “crypto-currency” because of their belief “that such assets do not reliably provide the standard functions of money and are unsafe to rely on as a medium of exchange or store of value.” Tell us how you really feel.

The committee warns that, due to crypto’s volatile nature and short history, crypto-assets present a host of risks for banks that choose to acquire them or provide crypto-related services. They then outline a few guidelines that banks should follow if they choose to do so, including performing due diligence, maintaining a clear government and risk management framework, publically disclosing any crypto-exposure, and open communication with any supervisory entity.

Quoine On Trial: The Singapore International Commercial Court (SICC) issued a ruling this week on the country’s first trial involving Bitcoin. The court ruled that the exchange had wrongly reversed several trades of B2C2, a market maker. In April 2017, B2C2 placed seven orders to exchange Ethereum for Bitcoin. Due to technical difficulties, the company was able to trade at a ratio of one ETH for 10 BTC, giving just one ETH a $12,000 value. The following day, however, Quoine reversed the trades.

The court ruled in B2C2’s favor but aren’t forcing Quione to pay the full value of what the market maker requester – a little over 3,000 bitcoins. Instead, the two companies must agree upon an amount or else go to trial again.

The post This Week in Cryptocurrency: March 15, 2019 appeared first on CoinCentral.

Venezuelans are having a difficult time as the country’s power grid shut off on March 7, leaving the majority of...