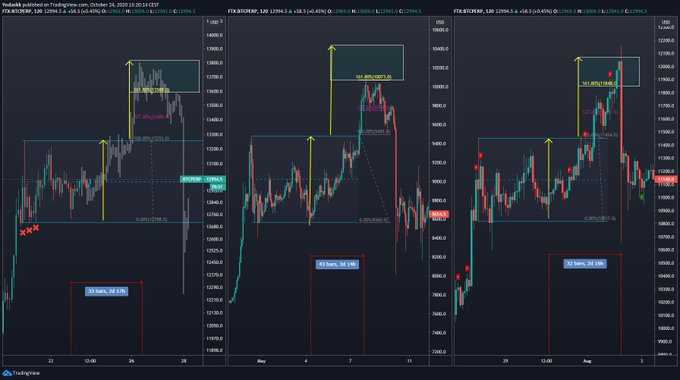 Bitcoin has undergone a strong rally over the past week, moving from the $11,500 range to the $13,000 region. The coin currently trades for $13,150, slightly shy of the weekly and year-to-date highs.

Analysts think that Bitcoin will continue its ascent in the coming days.

One crypto-asset analyst shared the charts below on October 24th. It shows that BTC’s recent price action looks extremely similar to that seen in May of this year and the price action in early August.

This fractal comparison indicates that in the coming days, Bitcoin is likely to undergo a price spike towards $14,000 temporarily, then pul back to pre-rally levels.

The analyst that made this observation is the one who called for Bitcoin to drop to $9,755 at the end of August. The cryptocurrency almost perfectly followed the path the analyst predicted, but its correction stopped at the $9,800 range.

Analysts say that the fundamentals of Bitcoin accentuate that the coin will move higher in the days and week ahead.

For one, progress is being made on the U.S. fiscal stimulus front. A new stimulus bill would likely drive the price of the U.S. dollar lower, driving Bitcoin and other currencies hedges higher.

With PayPal supporting crypto-assets, too, analysts are confident that there will be an influx of investment into Bitcoin over time. The cryptocurrency is expected to benefit also from the news that corporate treasuries are buying Bitcoin.