Last week, we brought readers attention to the action in Tron (TRX) where we noted the following, “While overall market conditions have remained range-bound with no real leadership to speak of at the moment, it’s not surprising that we have yet to see any follow-through from TRX as it appears that the cryptocurrency universe is awaiting some form of catalyst to trigger the next directional move.”

We also went on to state, “despite the lack of volatility that both investors/traders have been treated to over the course of the past several days, TRX continues to display favorable technical characteristics trading above both its 20 and 50DMA’s”, which is no longer the case today as TRX has since broken below its triangle pattern mentioned last week and currently resides ‘pinched’ between its 20 (yellow line) and 50DMA’s (dark blue line) as we can observe from the daily chart below: 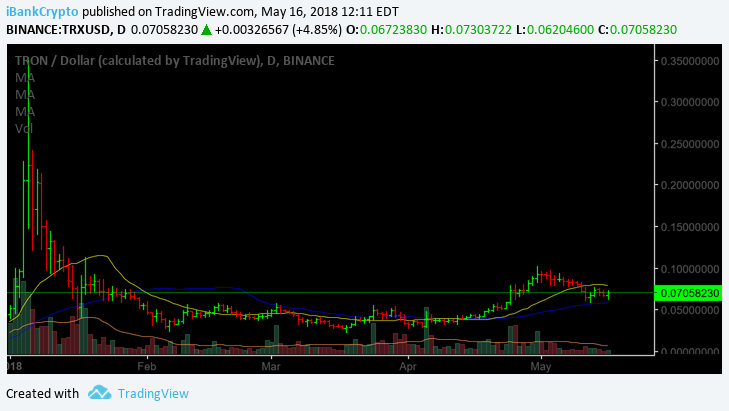 As we can witness above, readers of Global Coin Report should not have been taken ‘Off-Guard’ via the recent action as we noted last week that, “Although there appears to be very little activity to speak of within the action taking place in TRX at this time, such suggests that in the not too distant future, we may just be treated to an awakening that may catch many off-guard, whether that be a thrust top-side out of the coiling triangle pattern or perhaps, a move below”, which in turn resulted in the latter as opposed to the former.

Furthermore, we also went on to identify specific levels of interest that readers may want to be aware of, both top-side as well as potential support when we referenced, “moving forward, if at any time TRX can go top-side of the .0977 level and perhaps more importantly, can clear the .1024 figure, such move, should it materialize, would suggest greener pastures, while levels of potential short-term support can be found at the .076 and .062-.065 zone”, whereby the move down and below the triangle pattern sent TRX into and slightly beneath (.059) our noted .062-.065 zone, yet has since recovered smartly from such depths.

Nonetheless, although TRX has found the footing a bit slippery, as has the entire cryptocurrency universe these past several days of trade, Tron continues to hold the line at referenced potential support and has since recovered smartly back to the 7 handle as can be viewed in the chart above.

Therefore, while further work is required in order for Tron to right the ship completely from a technical perspective and is in no way out of the woods just yet, it’s encouraging that TRX continues to display decent relative strength and has been able to avoid a definitive break that holds beneath the .062- .065 zone mentioned from last week.

With that said, moving forward, both investors/traders may want to monitor the following levels for additional clues/evidence with regards to direction.

If, at any point in the days ahead, TRX is capable of clearing the .077 (former short-term support) level and perhaps more importantly, the .08 level (20DMA – yellow line) and can ‘stick’, such move, should it materialize, would certainly be a positive short-term development and suggest that perhaps the worst may be in the rear-view mirror, while the .062- .065 zone and most importantly the .058 figure (50DMA) providing potential support.

While the cryptocurrency tape remains slippery and elusive at this time, both investors/traders may want to continue to monitor the action in TRX closely in the days ahead for further signs of evidence with respect to direction utilizing the aforementioned levels above.