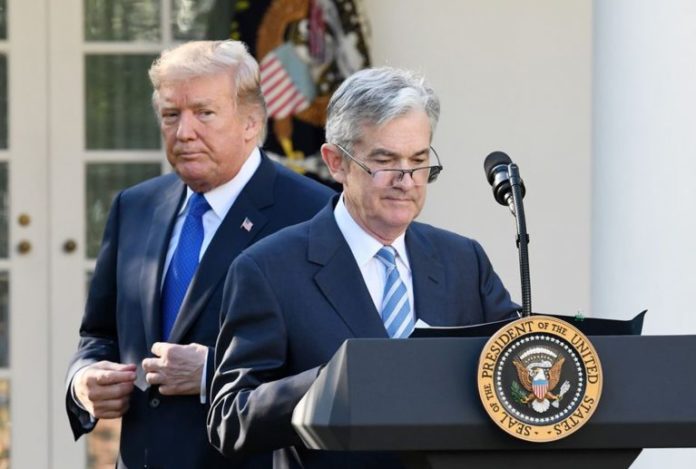 U.S. President Donald Trump is pressuring the central bank to cut interest rates even further as a spike in oil prices has offset the Federal Reserve’s ‘normalization’ tactics like rate-cutting and overnight repos. Additionally, the mega bank JP Morgan Chase (JPM) is being blamed for the lack of liquidity in the repo market’s cash reserves, as JPM’s recent reduction move accounted for a third of the Fed’s bank reserves for Q3.

Central banks are in a state of panic. No matter what they do, the economy is not being guided well by their easing tactics. In the last few months, at least 19 central banks have started participating in monetary easing practices in order to combat what’s called “stagflation.” The term refers to a period of slow economic growth combined with rising prices across products and services worldwide. The U.S. Federal Reserve has just started cutting rates and conducted spot repo operations to stimulate the economy. President Donald Trump has been pressuring Fed Chairman Jerome Powell and the central bank’s board members to cut rates even further. The Fed has already printed $128 billion in mid-September and added another $63 billion in collateral on the Q4 balance sheet last minute.

Trump says the prior rate cuts have not helped the U.S. dollar regain strength and he wants the Fed to chop rates as soon as possible. “As I predicted, Jay Powell and the Federal Reserve have allowed the dollar to get so strong, especially relative to all other currencies, that our manufacturers are being negatively affected,” Trump tweeted on October 2. “[The] Fed rate is too high — They are their own worst enemies, they don’t have a clue — pathetic.”

However, not everyone agreed with Trump and the well known gold investor and economist Peter Schiff told Trump he was wrong. “You’re the one who’s pathetic,” Schiff replied. “The U.S. dollar index was slightly higher on the day you took office than it is today — Your trade policies and the growth of government spending and deficits that you support are hurting manufacturing — The Fed actually did more damage under Obama,” Schiff added. However, Trump is in full support of his trade war, the current monetary easing tactics, rate cuts, overnight repos, and he seems to want a lot more. Trump emphasized last month that “the U.S. should always be paying the lowest rate.”

The pressure from Donald Trump has many economists thinking that more rate cuts will be implemented in October. For instance, CME Group’s Fed Watch tool shows there’s a 64% chance that the Fed will cut rates by another quarter-point during the October Federal Open Market Committee (FOMC) meeting. CME’s tool uses the futures market prices in order to determine how the economy is doing. A good example of CME’s metrics in use is the U.S. manufacturing purchasing managers’ index, which dropped to a low of 47% last month. The manufacturing index has not dropped that low since 2009 after the financial crisis was in full swing. However, these days financial experts don’t think the Fed’s small rate cuts will even help and many believe Trump’s trade war with China is the main issue. U.S. rates strategist at BMO Capital Markets Jon Hill blames the trade war. “Clearly the trade war and strong dollar continue to weigh on domestic goods producers,” Hill explained in a note to investors on Tuesday. “Given this, one has to wonder how impactful incrementally lower rates may or may not be.”

In addition to the theatrics between Trump and the FOMC board members, JP Morgan Chase (JPM) is being scrutinized for creating a massive repo market spike. Researchers have attributed JPM’s $2.7 trillion balance sheet to the jump in repo operations in mid-September and repurchase agreements jumped as high as 10%. Before the Fed’s overnight repos, publicly filed data shows that JPM removed a great portion of cash on deposit held by the Fed by 57%. Reuters reports that the demand for overnight Fed-induced cash exceeded the supply on September 17. JPM wasn’t the only culprit as another mega financial giant Bank of America (BoA) and its $2.4 trillion balance dropped 30% ($29 billion) of its deposits. An unnamed executive at a competing bank said the recent reductions were a “very big move” and “massive.”

Fed watchers and economists say that the crunch for cash has hurt the Fed because the central bank was depending mainly on its bond portfolio. The sluggish economy has made smaller financial institutions and corporations feel the need to obtain more cash reserves. As CME’s Fed Watch tool and the recent tweets stemming from Trump show, there’s definitely a chance the Fed and FOMC governors will slash rates again this month. Alongside this with JPM, BoA, and other incumbents reducing deposits considerably, the Fed will likely fire up the printing press to ease the demand pressure.