US President Donald Trump has signed an executive order creating a new task force to tackle financial fraud. The task force differs to its predecessor in its emphasis on digital asset fraud and cyber crime.

The group is called ‘the Task Force on Market Integrity and Consumer Fraud’, according to the official document. It will be chaired by Deputy Attorney General Rod J. Rosenstein and will include Christopher A. Wray, Director of the FBI.

The purpose of the group is to provide recommendations to Attorney General Jeff Sessions on the subject of financial fraud in all its guises. Notably, digital currency is included in the order.

The recommendations are to relate to the investigation and prosecution of specific cases and enforcement initiatives in general.

The task force will have the power to call officials of any other government agency to meetings, and through Sessions will be able to make suggestions to Trump regarding action to enhance cooperation between agencies and changes to legislation.

The new group will replace the Financial Fraud Enforcement Task Force that was set up in November 2009 by Barack Obama in the wake of the financial crisis. According to Bloomberg, the creation of a new group will help the current administration direct its focus; cryptocurrencies were not included in the previous task force’s remit.

Introducing the executive order, Rosenstein said at a press briefing: “Fraud committed by companies and their employees has a devastating impact on American citizens in the financial markets, the health care sector, and elsewhere.”

Rosenstein said at a bank meeting in February that the Justice Department was working on a comprehensive cryptocurrency strategy, calling banks “the first line of defense”.

Cryptocurrency regulation in the US

Robert Cohen, Head of the Securities and Exchange Commission’s Enforcement Division Cyber Unit, made positive comments about cryptocurrency at an event in May of this year, saying: “The SEC has been open about meeting with people from the industry, to come in and meet with the staff, to talk about the ideas you have, the new developments, and have a dialogue about the new technology.”

The SEC is one of the country’s main financial regulators. Its recent actions in connection with cryptocurrency include setting up its own fake-ICO website to help the public spot fraud, ruling that Ethereum is not a security which caused the price of that cryptocurrency to jump considerably, and leading the arrests of three individuals that perpetrated a $32 million ICO scam.

Yesterday, one of the US’ self-regulatory organisations published a notice urging its member companies to inform it of any cryptocurrency business that they have or plan to have. 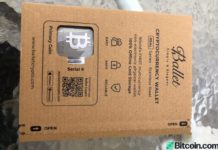 The Genesis Files: With Bit Gold, Szabo Was Inches Away From Inventing Bitcoin

As his Hungarian parents had fled post-war Soviet regime to settle in the United States, Nick Szabo came to call...