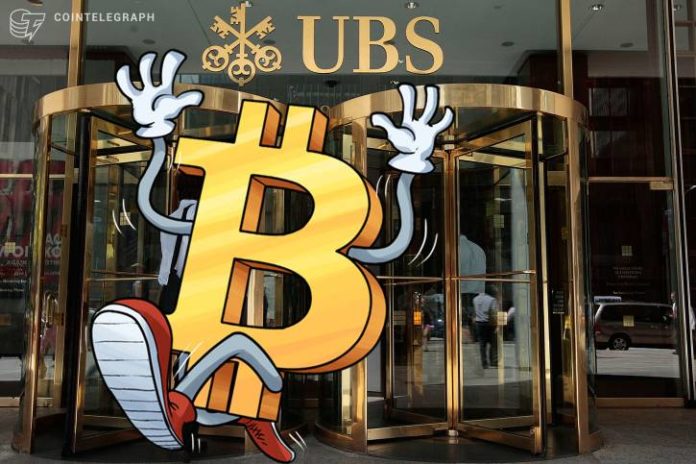 UBS chairman Axel Weber has stated that Switzerland’s largest bank will not offer its customers trading in Bitcoin and other cryptocurrencies, reported Cointelegraph auf Deutsch May 3.  Weber called for stricter controls on cryptocurrencies, stating “[t]hey [cryptocurrencies] are often not transparent and, therefore, open to being abused,” in a speech in Basel Messe, Switzerland.

According to the chairman, virtual currencies are at best “highly speculative investment vehicles,” and at worst they “facilitate the financing of terror, money laundering, and other criminal activities.” In his view, cryptocurrencies do not have the characteristics of a currency at the moment, they are far too volatile, and are rarely used to make proper payments.

However, Weber admits that he sees opportunities in crypto’s underlying technology, blockchain: “[e]verything that makes processes simpler, faster and more secure is beneficial to all of us: client, shareholder or bank.”

Weber’s recent remarks about crypto was not the first time he criticized the technology. Last year, he told the Neue Zürcher Zeitung am Sonntag that Bitcoin was not money, stating:

“Because money has three functions to fulfill: it has to be a means of payment – as such, Bitcoin is not universally accepted. Second, money is a measure of value. But there are no prices that are written in Bitcoin. And third, it must be suitable as a store of value. Bitcoin does not fulfill this condition either since the price of Bitcoin is not stable. A fundamental disadvantage of Bitcoin is that the number of coins dispensed is limited.”

Weber is not alone in his criticism of cryptocurrencies. In November of last year, Deutsche Bank issued an official warning to its clients regarding investment in Bitcoin. In January of this year, Thomas Mayer, ex-chief economist at Deutsche Bank, described cryptocurrencies as a “bad bet” and speculative objects of unknown risk.

In January of this year, the North American Securities Administrators Association (NASAA) and the US Securities and Exchange Commission (SEC) warned Main Street investors against investing in cryptocurrencies and Initial Coin Offerings (ICO). One of the main reasons the NASAA cited for the warning was individual investors not being sufficiently informed about the products in which they were potentially investing.