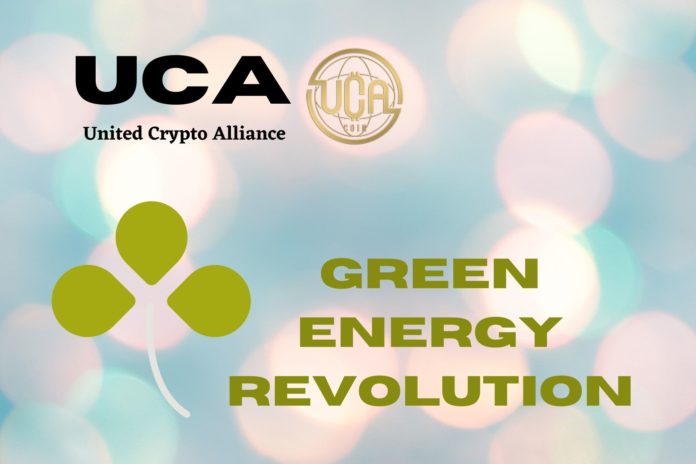 UCA Coin is one of such blockchain and cryptocurrency undertaking that aims to leverage the power of cryptocurrencies and finance the development of renewable energy industry across the globe.

The team behind UCA Coin works with the vision to cater the growth and development of renewable energies, which is one of the most important industries of the future. The idea is to improve the accessibility of renewable energies and make it cost-effective for every household.

To understand their broader vision and action, it is important to know that the UCA team has attained an important milestone in setting up their demo and marketing of clean energy.

As part of the broader UCA Project, a pilot plant at the German Baltic Sea Coast is now functional and online.

After the past few months of hard work and testing in several phases, a 5 KW hybrid power generation capacity system that works on both solar and wind energies has now been installed and made functional. This system is capable of delivering energy for 24 hours.

The system can be configured to work both on and off the grid (battery operated).

This idea behind deploying this machine is to capture long-term data and profiling of the meters to test, calculate, and identify the type of electrical equipment required for maximum power generation.

This system also comes with an integrated internet portal to retrieve all the performance metrics, data, and other operating parameters. This allows engineers to get immediate and real-time insight into system performance.

The UCA Project team is also working on a lighter model and expects them to be delivered to other regions by the beginning of 2021.

UCA Coin – Binding the Present With the Future

The entire idea of UCA Coin is to develop the financial prowess using the decentralized blockchain technology and deploy it towards green-energy initiatives. To make this possible, UCA team has charted a road-map to bring the use of UCA Coin in the mainstream financial ecosystem.

Upon its launch, the UCA Coin will be instantly available for trading on three different exchanges. In the next two years, the team will expand this listing to more exchanges. The team also plans to make the UCA Coin equivalent to cash as a means of daily payments and purchases.

The plan is to push the use of UCA Coin across 2 million merchant locations worldwide. The team will also work on the distribution and connection of UCA Coins to different POS and ATM devices.

The United Crypto Alliance (UCA) has also released its native UCA Card and developed tools to make it possible for everyone to buy the UCA Coins without the need of a crypto wallet. Using the UCA Card, users can make payments in UCA Coins at different merchant locations or even hold them as an investment option. The UCA Card also facilitates offline storage facility making sure that your investments are free from any online attacks.

The UCA Project is also patterning with several other reputed associations, companies, and institutions. The team will also conduct joint marketing measures with alliance partners and bring new customers to the ecosystem thereby increasing the use and circulation of UCA Coins.

As part of the UCA Marketing initiative, a small percentage of profits derived from the sale of clean energy systems will go towards UCA Coin Burn. The coin burn happens by sending UCA Coins to a wallet address that no one has access to. Coins sent to these addresses are permanently withdrawn from the market as they cannot be withdrawn or transferred without the private key. This creates a shortage of coins ultimately resulting in an increase in the value of UCA Coins.

The UCA Project is a well-structured initiative that matches the power of blockchain and crypto of a clean energy ecosystem. The team works with a clear focus and vision in mind that helps to reduce carbon footprint and make renewable energy available to every household through easy accessibility and in a cost-effective manner.

Bitcoin has added about $73 billion to its market capitalization since its March 13 low. But BTC’s chances at ballooning...