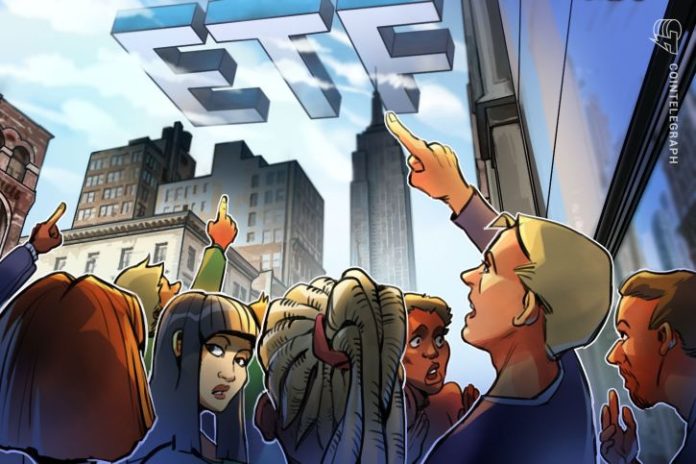 Huobi, a Singapore-based trading platform currently ranking among the world’s top three cryptocurrency exchanges, has made headlines on June 1 as it unveiled an exchange-traded fund (ETF) that tracks an index of top ten crypto assets against Tether, a digital currency tied to the US dollar.

While an impressive feat that will undoubtedly draw even more retail investors into cryptocurrency trading worldwide, on the global scale this is hardly the first instance of a regulated crypto-based derivative being offered to the public. Sweden, which usually serves as a textbook example for getting crypto-based investment funds right, had introduced bitcoin traded products as early as in 2015.

As pockets of crypto securities emerge in Europe and Asia, one major jurisdiction is conspicuously absent from this map – the United States. Despite numerous efforts on behalf of investment firms to get a regulatory clearance for listing and trading cryptocurrency ETFs on major US exchanges, the Securities and Exchange Commission (SEC) has been reluctant to open the floodgates so far. A closer look at the back-and-forth between the regulatory agency and wannabe pioneers of regulated crypto investment suggests that the SEC’s approval is just a matter of time.

What exactly is ETF?

Exchange-traded funds, or ETFs, are securities that combine diversification of mutual funds with trading capacities of stocks. An ETF tracks an index or a basket of assets that are proportionately represented in the fund’s shares. Along with index mutual funds, ETFs are one of the major mainstream tools for passive investment. Longing for the allure of regulated securities, many in fintech community consider the emergence of traded crypto funds a milestone on the way to mass adoption. Serving as a liaison between the world of crypto exchanges, which remains obscure to many cautious investors, and more traditional financial tools, crypto ETFs should significantly broaden the scope of actors tapping into the pool of digital wealth.

A relatively new yet already fairly established financial instrument, ‘regular’ ETFs are commonly associated with lower investor risks than individual stocks. Indeed, when one buys into a basket of multiple assets, they are guarded from ups and downs that single stocks are prone to. Losses from underperforming assets are mitigated by gains from those that appreciate at a faster speed, while the overall growth of industries, markets, and indices drives the value of fund shares up over time. As the famous bet initiated by Warren Buffett showcased, an index fund (an instrument organized by the same principle as an ETF but not necessarily traded on the exchange) over a span of a decade massively outperformed a collection of hedge funds carefully selected by a Wall Street asset manager.

How are they supposed to work in crypto

There are several ways in which an exchange-traded product can be tied to digital assets. The most straightforward one is by actually purchasing and storing cryptocurrency, so as to divide shares of its ownership among the fund’s stakeholders. Early crypto filings to the SEC in the spring of 2017 followed this model. Another option, adopted by the second wave of applicants later in the year, is an ETF that owns bitcoin futures.

One of the earliest precursors of crypto ETFs on US soil sprang from Tyler and Cameron Winklevoss’ work on a bitcoin price index, named, well, Winkdex. The news that the twins’ attorneys were working to lay the legal ground for an exchange-traded fund tied to bitcoin’s price surfaced immediately after the index itself went live in early 2014. The effort appeared to be no mean feat, as it wasn’t until March 2017 that the Winklevosses had finally filed a formal application before the Securities and Exchange Commission. Bitcoin price surged in anticipation of the ruling, but the SEC’s fateful decision came as a downer for the twins and the industry at large.

The application to list and trade shares of the Winklevoss Bitcoin Trust was rejected, as the securities watchdog cited lack of regulation in the markets and vast potential for fraudulent practices. Yet the decision left some room for guarded optimism, since it stipulated that the cryptocurrency technology was still in its nascency, and the Commission was still open for reviewing its policy as more mature and better regulated bitcoin marketplace develops. Just a few weeks after repulsing the first charge, the SEC had to deal with another application to list a product tracking digital currency. NYSE Arca exchange sought permission to trade the SolidX Bitcoin Trust, an exchange-traded product also tied to bitcoin, only to be denied in a language mirroring an earlier Winklevoss decision.

Who’s jumping on the bandwagon

It didn’t take long until the next spike in crypto ETF filings occurred. Spurred by the Chicago Board Options Exchange announcing its plans to offer bitcoin futures in the fourth quarter of 2017, prominent investment firms such as VanEck and ProShares started their quest to cut through the red tape. Having filed in August and September, though, both ETF providers saw their applications stall for the reason that the futures products their funds were supposed to track were not yet available.

As CBOE and CME’s bitcoin futures became a reality and bitcoin price surges in late 2017, the SEC found itself flooded with bitcoin-based products approval applications once again: by early January 2018, at least 14 of them were pending with the agency. Among big players of the ETF industry, VanEck and ProShares were joined by Direxion and First Trust. The Securities and Exchange Commission remained unimpressed. In its feedback to the applicants, the Commission expressed concerns over the liquidity and valuation of the instruments underlying the proposed funds.

The regulator also felt compelled to come up with some public clarifications on the issue, which resulted in a publication on January 18 of an open letter by Dalia Blass, director at SEC’s Division of Investment Management, to the heads of two investment associations. The account focused on five areas of concern to the Feds: liquidity, manipulation, valuation, custody and possible arbitrage of crypto-related assets. The letter reiterated that until these points are addressed in a satisfactory manner, it is not ‘appropriate for fund sponsors to initiate registration of funds that intend to invest substantially in cryptocurrency and related products.’

SEC is considering a rule change

It has to be mentioned that one bitcoin-related financial instrument has been available for the US investors for a while. Bitcoin Investment Trust, ran by Grayscale under the ticker GBTC, held about 175,000 bitcoins as of February 2018. However, GBTC does not qualify as an ETF, since it is not registered with the SEC under the Investment Company Act of 1940, nor are a handful of other altcoin-based trusts that Grayscale Investments announced in March. These products are traded over the counter, which means they are not listed on traditional exchanges, but may be found on alternative platforms where regulations are less stringent. This fact also deprives them of full ‘establishment’ legitimacy. Grayscale’s bid to authorize GBTC for listing with NYSE Arca exchange back in September 2017 was fruitless.

Meanwhile, the exchange between regulators and market actors continued. In late March, Cboe President Chris Concannon weighed in the debate by publishing an open response to Dalia Blass’ January piece. Concannon’s main point was that cryptocurrency markets now look increasingly similar to regular commodity markets, which means that most of the regulator’s concerns could be addressed within the respective commodity framework. Therefore, as the exchange’s head reiterated, there is no need in holding back the development of the emerging class of crypto-based investment instruments. Even though this was unlikely in response to Concannon’s letter, around the same time the SEC announced that it was considering a rule change that could allow two Proshares bitcoin ETFs to come into existence. The decision seems to be in the works still.

The relentless Winklevoss twins haven’t been wasting their time either. The patent that was handed to them in May looks a lot like a product of their efforts to find a workaround that could address some of the SEC’s disquiets and help them get a step closer to clearing the regulatory bar. The patent protects a method of settlement in crypto exchange-traded products.

Finally, VanEck, another champion of crypto-powered investment instruments, have filed an application for yet another bitcoin ETF. This time, the price of a share is set at $200 000 in order to attract institutional investors, and instead of offering futures contracts the firm plans to go with a physically-backed model, which involves owning actual cryptocurrency.

Given the regulators’ apparent movement towards a rule change in April, as well as massive corporate and retail demand for cryptocurrency derivatives, it looks like sooner rather than later the SEC’s defenses will crumble. Too many powerful and affluent actors are pushing towards the adoption of crypto ETFs by lobbying, legal, and invention activities. While the arrival of more institutional money that regulated crypto securities promise might not quite match the libertarian ideals of Cypherpunk movement, it can at least provide legitimacy and stability for the whole ecosystem.

Connecticut governor Dannel Malloy signed SB 443 into law, which establishes a blockchain working group to study the technology, according...