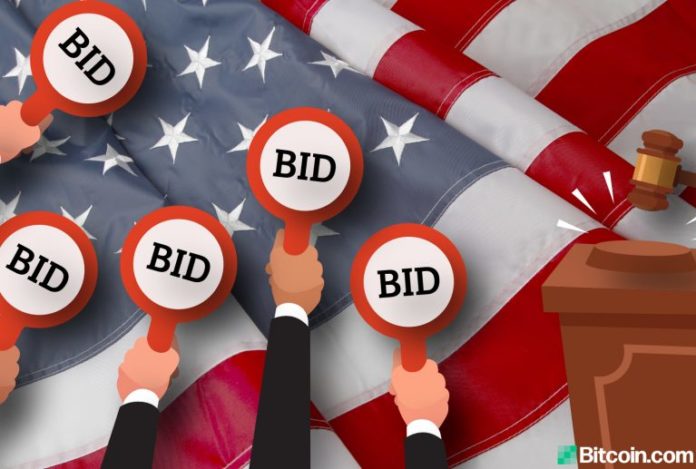 The U.S. government has opened registration for the bidding of over 4,040 bitcoins, currently worth more than $37 million, which will be auctioned off on Feb. 18. The winning bidder will be notified on the same day. These bitcoins were forfeited in various federal criminal, civil and administrative cases, the U.S. Marshals Service explained.

The U.S. government is auctioning off some bitcoins this month. According to the announcement by the U.S. Marshals Service (USMS) which is holding the auction, approximately 4,040.54069820 bitcoins will be for sale. The USMS is a federal law enforcement agency within the Department of Justice (DOJ). The agency explained that interested parties are invited to submit a bid for purchase, adding:

How to Participate in the US Government’s Auction

To be eligible to bid in the auction, interested bidders must register with the USMS and submit all required documents with deposits. Registration opened on Feb. 3 and will close on Feb. 12. The winning bidder’s deposit will be retained by the USMS and credited towards the purchase price. The deposits of other bidders will be returned to the original accounts from which they were received.

The online auction will take place on Feb. 18 from 8 a.m. to 2 p.m. EST. Bids must be an all-cash offer in U.S. dollars. The announcement details:

However, the government agency warned that “the number of bids received and the complexity of the review process may require additional review time.” The winning bidder must wire purchase funds to the agency by 2:00 p.m. EST on Wednesday, Feb. 19. Failing to do so will disqualify the bidder and another winning bidder will be selected.

The USMS also explained on its website where these digital assets came from, stating:

These bitcoins were forfeited in various federal criminal, civil and administrative cases.

The USMS is recognized as the U.S. government’s leader in the sale of cryptocurrency. It has conducted a number of digital asset auctions over the years, including one that disposed of the 144,000 bitcoins seized from the Silk Road darknet marketplace.

The agency established a memorandum of understanding in 2016 with the Treasury Executive Office for Asset Forfeiture for it to handle the disposition of forfeited bitcoins emanating from the Treasury Forfeiture Fund. In its annual report for the financial year 2018, the agency declared that it sold a total of 5,883 bitcoins in two auctions for a total of $55.8 million, adding that it continued to be the lead custodian for the 22 different types of cryptocurrencies seized by the DOJ and the Department of Treasury.

What do you think of the U.S. government auctioning off bitcoins? Would you want to bid for some? Let us know in the comments section below.

Images courtesy of Shutterstock and the USMS.

The post US Government Auctioning off Bitcoins Worth $37 Million in 2 Weeks appeared first on Bitcoin News.

Despite being flagged as the greatest cybersecurity threat at the start of last year, crypto malware-related hacks or cryptojacking was...