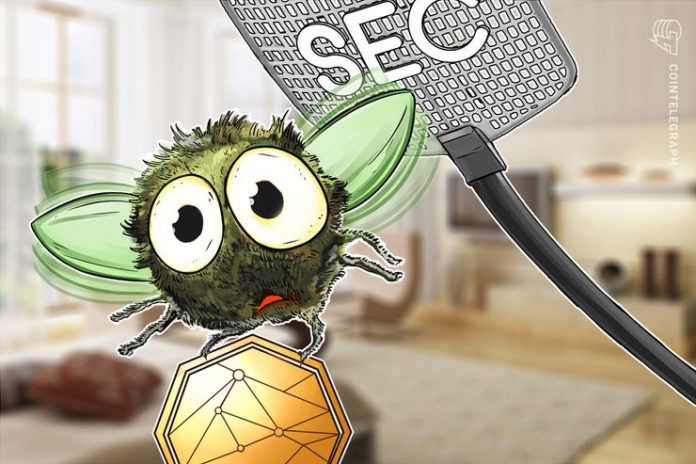 The SEC has been involved in ongoing court proceedings against the owners of the associated firm PlexCorps — Dominic Lacroix and Sabrina Paradis-Royer — at the New York Eastern District Court since December 2017. The SEC’s initial complaint had charged the pair with violating securities law in respect to PlexCorps’ PlexCoin ICO in August 2017.

The complaint had accused Lacroix — whom it called “a recidivist securities law violator in Canada” — and his partner of “misappropriating” investor funds that were “illegally” raised in a misleading, deceptive, and unregistered securities offering. The PlexCoin ICO is alleged to have raised $15 million from “thousands of investors,” reportedly promising investors a 1,354 percent return in just 29 days.

In the ensuing months, the regulator has twice sued Lacroix for securities fraud and issued two emergency asset freeze orders against him.

According to the SEC, the duo have continued to ignore a succession of Court orders concerning the “discovery, accounting […] and repatriation of assets.” The regulator therefore chose to file a motion to compel and a motion for discovery sanctions against the duo yesterday, Sept. 25.

The ignored injunctions are said to have included a court order from December 2017 that enjoined the defendants to produce — within three business days — “a sworn verified written accounting” reflecting the amounts and locations of investor assets raised from the PlexCoin ICO, and to “immediately” transfer to the registry of the Court all assets “derived from PlexCoin or PlexCoin Tokens or PlexCorps.”

Despite an extension of the deadline and further injunctions to provide the SEC with “a full list of bank and brokerage accounts […] and any blockchain addresses through which investor funds were solicited or received,” Lacroix and Paradis-Royer have reportedly failed to comply with any of these orders. They are further reported to have ignored a court order from this August, which demanded further accounting documents pertaining to investor funds as well as the defendants’ assets.

The SEC has this week argued that the defendants demonstrate no intention of “participating meaningfully” in the ongoing litigation, and could potentially employ a deferral strategy “indefinitely, including potentially after the entry of a preliminary injunction.” The SEC has reportedly noted that such a persistent failure to comply with court demands could further facilitate the pair’s potential dissipation of investor assets.

In a recent high-profile development for the crypto regulatory landscape in the U.S., a New York federal judge has ruled this month that securities laws are applicable for dealing with crypto fraud allegations.