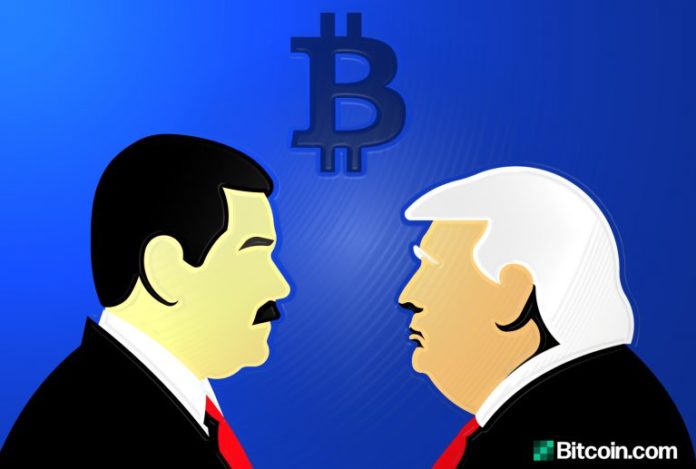 Nicolás Maduro and the United Socialist Party of Venezuela have been accused of circumventing financial blockades imposed by the U.S. government. According to local reports, Maduro’s regime evades sanctions with cryptocurrency alongside an airline application called Jetman Pay. Allegedly, Jetman Pay collects airline taxes from travelers who purchase tickets from Maiquetía International Airport and the Venezuelan government agency Sunacrip converts the tax money into BTC and sends the funds to regime accounts in Russia, China, and Bulgaria.

As the Venezuelan Inflation Rate Jumps to 10,000,000%, Sunacrip Collects Taxes in Crypto

The state of the Venezuelan economy and political system has been in disarray and the whole world has been watching the events unfold. The country’s legal tender, the sovereign bolivar, has suffered from massive hyperinflation and the Venezuelan fiat currency recently reached an inflation rate of 10,000,000%. Venezuelan President Nicolás Maduro has been a controversial leader who recently introduced the first nation-state issued cryptocurrency, the petro. There’s been a lot of conflicting reports concerning the petro and the government agency behind the operation called Sunacrip. The National Superintendency of Crypto Assets and Related Activities (Sunacrip) agency manages the petro distribution and the collection of other cryptocurrencies. Through Sunacrip and other state-sanctioned cryptocurrency exchanges, Venezuelans can supposedly obtain petro by purchasing the Venezuelan digital currency with assets like BTC and LTC. Venezuelan native Pedro Peroza believes that Sunacrip was implicitly built to collect taxes using various cryptocurrencies.

Sunacrip’s website has seen a complete overhaul and has an abundance of information regarding the petro. The government entity recently announced the launch of the official petro wallet application and revamped blockchain explorer. Interestingly, the new wallet called Petroapp allows you to manage not only your petros, but also BTC, LTC, and DASH. Cryptocurrency mining in Venezuela is also regulated and taxed by Sunacrip, specifically by the agency’s subset called the Digital Mining Administration. Sunacrip’s website states:

The Digital Mining Administration’s objective is the planning, coordination, promotion and execution of digital mining activities and associated processes, licensing and certificates for the import, export, development and usufruct of said activities in the national territory.

On July 22, regional publications reported that Maduro’s regime is being accused of collecting taxes from airline travelers and then converting the funds to BTC to escape U.S. sanctions. The report details that travelers purchase tickets through an application called Jetman Pay, a firm located in Florida. The process allegedly helps convert the airline tax into BTC in order to send the funds to regime accounts held internationally. ABC International says the crypto is being sent to countries like Russia, China, and Bulgaria in exchange for fiat reserves.

“Through digital wallets, they convert the tax payment into bitcoins and divert them to accounts abroad. According to airport sources consulted, the bitcoins are transferred to international exchange houses located in Hong Kong, Russia, China, and Hungary,” ABC International reported. “An addendum (modification of a certificate of registration) to which ABC had access, was signed by the Director-General of the IAIM (Maiquetía Airport), Admiral Carlos José Viera Acevedo and the director of Barracuda Solutions, Ángel Lovera.”

Barracuda Solutions or BCDA Aeronautical Solutions located in Opa Locka, Florida is the parent company of the Venezuelan subsidiary Jetman Pay. The company was founded by Jetman Pay’s vice president Ángel Alberto Lovera, a commercial and private pilot who graduated from the Military Aviation School of Venezuela in 2006. ABC reports that members of the Lovera family created Jetman Pay to receive airline tax payments stemming from all of the private and cargo planes from Maiquetía airport. The whole scheme is regulated by Sunacrip director Joselit Ramírez and the Minister of Industries and National Production Tarek El Aissami.

The US Financial Blockade Imposed by the Trump Administration

Speculators believe the whole idea of converting taxes into cryptocurrencies and sending them to foreign accounts owned by the regime is meant to circumvent the U.S. financial blockade. During the second week of April, the Trump administration imposed harsh sanctions against Venezuela and the country’s central bank. The move is meant to restrict President Maduro and tighten the finances stemming from the United Socialist Party. The financial blockade severs the Venezuelan central bank’s access to the U.S. dollar. Venezuela under Maduro’s regime has defaulted on loans but is still able to sell gold and oil to various nations in the Middle East, Russia, and Turkey. Just before the mid-April extended sanctions imposed by the Trump administration, the Venezuelan central banks sold eight tons of gold for $400 million. Estimates claim that there’s still around $8.6 billion worth of gold reserves under the United Socialist Party’s control.

Speculators believe that Maduro’s administration has been using cryptocurrencies like BTC, LTC, and the petro to purchase foreign currencies and gain access to the U.S. dollar. Various reports over the last year detail that Venezuelan citizens themselves have been seeking refuge in cryptocurrencies in order to hedge against hyperinflation or exchange for USD. Crypto organizations like Panda Group, Athena Bitcoin, and Bitcoin.com have been helping Venezuelans connect with digital assets for this very reason. Bitcoin.com provides resources like merchant onboarding in Caracas and peer-to-peer services like the Local Bitcoin Cash Marketplace.

ABC’s documents further reveal that the Maduro regime has authorized Barracuda Solutions and Jetman Pay to be the exclusive distributor for the handling private and cargo airline taxes within Venezuelan territories. Barracuda Solutions also has headquarters in Caracas and was officially registered in the Venezuelan mercantile registry on October 16, 2014. Reports state that the Jetman Pay app scheme only works at the airport in Caracas, but there are plans for other Venezuelan terminals and the port of La Guaira.

What do you think about Maduro and the United Socialist Party being accused of using BTC to circumvent sanctions imposed by the U.S. using airline taxes? Do you think that Sunacrip’s main objective is to collect taxes in cryptocurrencies? Let us know what you think about this subject in the comments section below.

Disclaimer: Readers should do their own due diligence before taking any actions related to the mentioned exchanges, companies, software or any of the affiliates or services. Bitcoin.com or the author is not responsible, directly or indirectly, for any damage or loss caused or alleged to be caused by or in connection with the use of or reliance on any content, goods or services mentioned in this article. This editorial review is for informational purposes only.

Everyone wants to know what direction bitcoin prices will go next. Crypto analysts are constantly scrambling to find new technical...