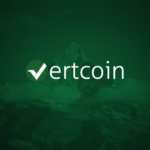 Today, we will be using historical data and market price forecasts for VTC in order to determine a Vertcoin price prediction for December 2019.

Vertcoin was first developed in 2014, forking from Litecoin. The coin is built on the PoW consensus algorithm, but unlike Bitcoin and other cryptos, it was designed to be ASIC-resistant.

The cryptocurrency enables fast digital transactions without requiring any third party to validate the transaction.

Due to the fact that Vertcoin is based on Litecoin, it also inherited some of Bitcoin’s features, as Litecoin was also a fork of Bitcoin.

But there are some major differences between Vertcoin and Bitcoin. The first one is that Vertcoin has a transaction confirmation time of 2.5 minutes, and Bitcoin requires 10 minutes to confirm transactions. While the Bitcoin supply is capped to 21 million, Vertcoin has a total supply of 84 million, which is four times bigger than that of BTC.

Also, in terms of mining accessibility, Vertcoin can be mined by anyone, as the coin does not allow ASIC hardware devices. This means that people can mine with GPU cards, which are more accessible and affordable pieces of hardware. On the other hand, Bitcoin requires expensive ASIC devices in order to produce a mining profit, and there are also numerous mining farms that have greater hash rates that dwarfs the efforts of any solo miner.

At first, Vertcoin used Scrypt-N algorithm for its PoW consensus, but then ASICs for Scrypt-N started being developed, so the team had to take another approach.

This led to the creation of the Lyra2RE algorithm, updating Vertcoin on December 13th, 2014 to implement the algorithm.

Since its implementation, Lyra2RE has been upgraded to Lyra2REv2 through another hard fork on August 10th, 2015. The update was made in order to stop a botnet that had taken control of 50 percent of the network’s hashing power.

VTC failed to maintain its sudden gains and slowly began descending on November 4th, going below $0.3 levels. Vertcoin closed that day at $0.294018. From November 5th to November 21st, Vertcoin has minimal fluctuations, trading on average between $0.25 and $0.27. 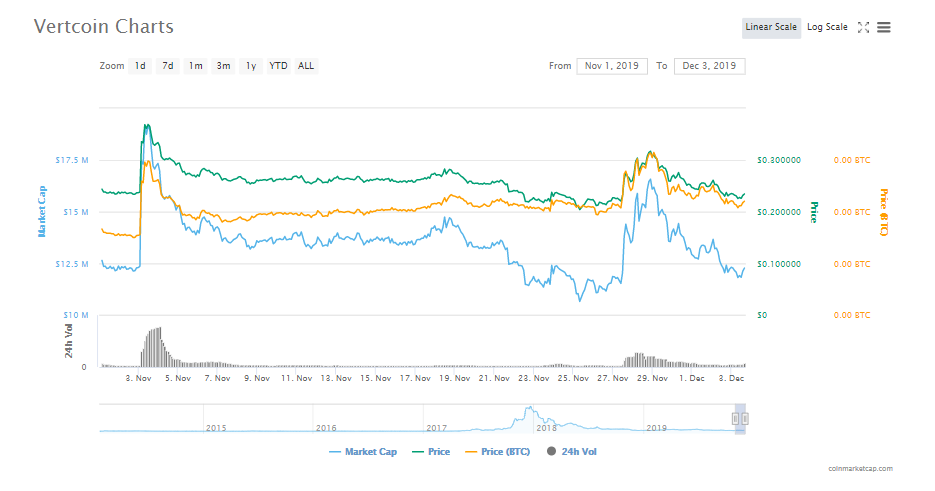 The following days, VTC fell to $0.21-$0.22 support levels, but then on November 27th, the coin started shooting up to $0.27. The bullish trend continued until November 29th, testing frequently the $0.3 resistance level, but then towards the end of the day, Vertcoin fell back to $0.27.

The coin continued to slip gradually in the following days, with December opening at $0.24. December 2nd saw VTC trading at $0.26 at the start of the day but then fell back to $0.23.

The calculated pivot, resistance, and support levels are: 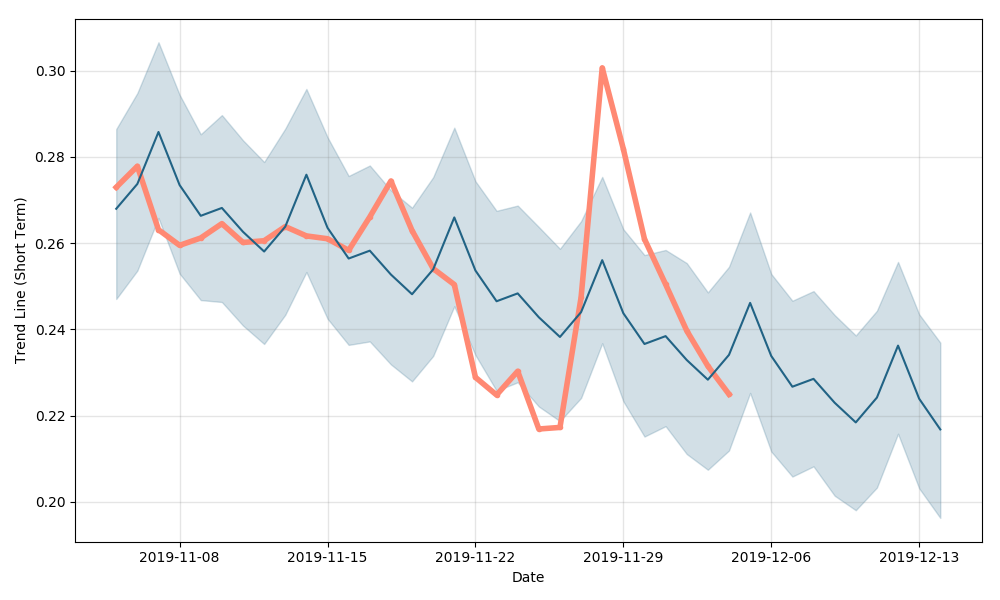 On December 1, the Vertcoin blockchain suffered a 51% attack, but it was then discovered that it was not successful, as the hackers that orchestrated the attack did not make enough profits to cover the attack costs.

James Lovejoy, Vertcoin’ lead developer reported the failed attempt to perform the attack on the network.

The developer noticed that on November 30, the cost of renting resources for Lyra2REv3 algorithm saw a sharp increase. On December 1, an anonymous attacker removed 603 blocks from the main Vertcoin network put in their place their own 553 blocks.

But the attacker experienced some issues executing his plan:

After the developer contacted Bittrex, which has the largest volume of VTC, the exchange then blocked its wallets.

It is suspected that Bittrex was the original target, but the double-spend portion attack was abandoned as Bittrex disabled its wallet before the fork could go through.

This was the second 51% attack on Vertcoin – the first one taking place in December 2018.

The Github page of the project has only 50 repositories, with two people working on the project and monthly updates. The community is not very active compared to other coins of its size. The blog does not have any new posts regarding upcoming or current developments, nor are there any roadmap achievements mentioned on its official site.

To get a better feel of the market sentiment, we have included some of the sites that have made their own Vertcoin price prediction for December 2019.

Digitalcoinprice forecasted that in December, Vertcoin will have a trading price of $0.05540420, which would mean a decrease of -76.05 %. This is one of the most bearish VTC predictions we have found so far.

Coinfan estimates that VTC will have a minimum estimated price of $1.5057, with a maximum estimated value of $1.92395. This is a rather optimistic prediction considering current values.

We hope that the information we have provided in our article will be of help to you in your Vertcoin mining endeavors. Keep in mind that there is no price prediction that is 100% accurate, and most of it is speculation.

Hackers can steal crypto payments by using a relatively new malware that replaces the receiving address between copying and pasting....