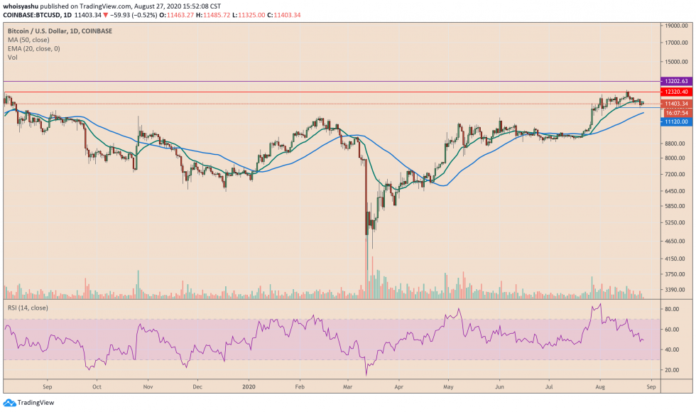 A veteran market strategist expects Bitcoin to hit $12,000 even as the cryptocurrency looks uncertain ahead of the annual Jackson Hole meeting on Thursday.

Mark Principato, the founder of New York-based Seeking Cryptos, said BTC/USD is setting up for “a new swing trade long off of today’s inside bar.” The analyst was seemingly referring to the pair’s consolidation area between $11,120-support and $11,700-resistance.

The statement followed Bitcoin’s repeated attempts to maintain its close above $12,000. The cryptocurrency this week corrected lower towards $11,120 on short-term profit-taking sentiment but found adequate buying pressure near the said intraday low level. As a result, the price is practically going nowhere.

Bulls are waiting for a sharp rally above $11,700 to confirm $12,000 as their upside target. Meanwhile, bears expect the price to fall below $10,500, a monthly support level, to form lower-lows towards $9,700. Part of the reason is a CME gap that exists below the $10K-level. Spot rates fill such missing candles 90 percent of all the time.

The Federal Reserve Chairman will deliver a keynote at the first virtual Jackson Hole meeting of global monetary policymakers. Officials have signaled that they are ready to compensate for lower levels of inflation in previous years by seeking higher inflation in the coming ones.

Mr. Powell’s speech expects to shed light on how the Fed wants to appraoch the inflation rate. Economists believe that the US central bank would raise it beyond 2 percent, a target that it adopted in 2012 but never went beyond it.

The decision will come at a time when the Fed has already injected trillions of dollars into the US economy via its open-ended bond-buying program and near-zero interest rates.

A continuation of the same policy expects to send investors away from cash and cash-enabled markets.

Instead, they could seek better profits in riskier assets. That is the same reason why many observers, including New York-based Grayscale Investments, sees the Bitcoin price rising in the long-term. The cryptocurrency has surged by more than 200 percent against the same macro factors.

“Because of Bitcoin’s unique qualities – such as its verifiable scarcity and supply that can’t be controlled by a central authority – we believe it can be leveraged as a store of value and as a way to escape this great monetary inflation,” the investment firm said in its August report.

Binance announced that it has added the ETH/NGN pair alongside a slew of other pairs on Thursday morning. Ethereum, the...