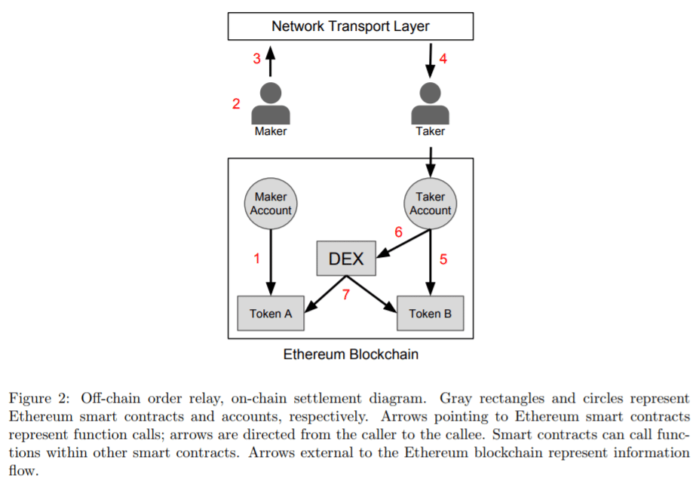 As its website conveys, “0x is an open protocol that enables the peer-to-peer exchange of assets on the Ethereum blockchain” and used to power decentralized exchanges (DEXs).

When they founded 0x in October of 2016, Amir Bandeali and Will Warren were betting on the disruptive trajectory of blockchain technology. They believe in a future where assets of all flavors, from stocks to currencies to precious metals, are traded publicly as tokens on the blockchain. Given the versatility of Ethereum’s platform and the scope of its decentralized applications, they think Ethereum’s blockchain is the ideal medium to accommodate this revolution in asset exchange.

TL;DR: 0x is a protocol that wants to streamline token trading with off-chain orders via Ethereum powered smart contracts.

The crux of 0x’s decentralized trading focuses on an off-chain ordering relay that cuts back on gas prices and reduces network bloat. For those of you who have any experience with a decentralized exchange like Ether Delta, you may already see the benefit of off-chain orders.

If you don’t, here’s a quick explanation. Most decentralized exchanges function using smart contracts powered by the Ethereum blockchain. This means that all order functions and trades take place within these smart contracts, and users are always in control of their funds, rather than trusting them to a third party like they would with a centralized exchange (e.g., Binance and Bittrex).

It also means that traders must execute transactions on the blockchain every time they want to manage their funds, whether that be for depositing funds into an exchange’s smart contract or placing, canceling, or filling an order. This costs gas, a fee paid in Ethereum to ensure that these transactions are processed on the blockchain by its miners.

If you were using Ether Delta, for instance, you’d pay a gas fee every time you wanted to deposit funds into the exchange’s smart contract to make an order. And you’d pay another gas fee to execute that trade once your order is filled.

Between depositing, placing an order, executing a trade, and withdrawing, gas fees can add up quickly. Decentralized exchanges are great for their security benefits, but they lag behind their centralized counterparts in both user operation costs and accessibility for this very reason.

This is where 0x comes in. The 0x protocol improves decentralized exchanges by utilizing off-chain ordering relays in conjunction with on-chain settlements. Essentially, this allows you to broadcast an order off-chain that another user fills. Only value transfers are executed on-chain, leaving all other trading commands to off-chain procedures. Thus, transactions are only run through the network when a trade is executed, allowing users to reduce the gas fees associated with trading operations.

To accomplish this, 0x uses what it calls “relayers.” Relayers are responsible for broadcasting orders through public or private order books. They bring liquidity to the network by hosting its order books, acting effectively as an exchange. Unlike an exchange, however, a relayer cannot execute a trade. It can only facilitate trading by presenting maker orders broadcasted to the network. For a trade to be fully executed, a taker must fulfill the order by submitting the maker’s signature along with its own to the decentralize exchange’s smart contract. In compensation for facilitating this exchange, a relayer is paid a fee in 0x’s native currency, ZRX, for each transaction. 0x also accommodates Point-to-Point Orders, which are orders transmitted by makers with a specific taker in mind. These orders allow two users to directly transfer funds through a variety of messaging mediums, including email, Facebook messenger, and more. When a maker address sends an order relay this way, only the specified taker address can fulfill it, protecting funds from being hijacked by malicious third parties.

Along with compensating relayers for broadcasting order books, the ZRX token is used to facilitate decentralized governance on 0x’s platform. Stakeholders use the currency to vote on decisions that affect the blockchain, including protocol integrations and upgrades, without disrupting the entire network. In addition, the 0x protocol is application agnostic, and its smart contracts are open sourced and publically accessible. This allows any development team to build on 0x if they need an exchange function for their token or platform, so the protocol serves as a plug-in for other Ethereum-powered DApps. Its application agnosticism and shared protocol layer also allow for DApp interoperability, creating a “shared infrastructure for a variety of [applications].”

There are already a number of crypto projects that are building on 0x, including Augur, Status, district0x, Blocknet, Request Network, and many more.

Lastly, 0x sports a “Token Registry contract [that] will be used to store a list of ERC20 tokens with associated metadata for each token: name, symbol, contract address, and the number of decimal places needed to represent a token’s smallest unit (needed to determine exchange rates). The registry will serve as an official on-chain reference that may be used by market participants to independently verify token addresses and exchange rates before executing a trade.” 0x stakeholders are responsible for governing this information by adding, modify, and removing data when needed.

Following a high of $0.50 coming out of its ICO, 0x slowly receded to a support of ~$0.20 throughout September 2017. It remained at this level during the month of October and had a relatively quiet November in a time when most altcoins were gaining.

Since then, the token price has had three significant bumps. The first occurred in April/May in which it reached a local high of just under two dollars. Following that high, the price has consistently fallen, experiencing brief price increases coinciding with the launch of 0x V2 on testnet in June and the launch of 0x V2 on mainnet in September. Surprisingly, the ZRX price saw an immediate dip after being listed on Coinbase in October 2018.

0x is currently trading at just over $0.30. Many investors state that past performance doesn’t indicate future price movements. However, it seems as if the ZRX price does tend to rise immediately following news of a new product launch. Make sure you’re keeping an eye on the project’s roadmap to spot when the next announcement may occur.

Where to Buy ZRX

Most of 0x’s trading volume comes from Binance in the form of Bitcoin and Ethereum trading pairs, but it’s listed on a number of popular exchanges, including Huobi, OKEx, HitBTC, and Liqui among others.

You can also grab some ZRX on Coinbase Pro (formerly GDAX) for USD or EUR.

Where to Store ZRX

0x is an ERC20 token, so the MetaMask browser extension, Ledger Nano S, and MyEtherWallet will support 0x along with any other ERC20 compatible wallet. If you’re looking for a software wallet, check out Exodus.

The 0x team is lead by co-founders Will Warren and Amir Bandeali but is more well known for their advisory board. Fred Ehrsam (Coinbase co-founder), Joey Krug (Pantera Capital Co-CIO), and Linda Xie (Co-founder Scalar Capital) all advise the project.

Back in September of 2017, the 0x team posted an updated roadmap on their blog. In late November that year, they posted a development update addressing some of the roadmap’s Q4 goals for 2017. These included:

The team has done a good job of accomplishing the items on their roadmap. They set out to complete 0x V2.0 by Q2 2018 and, lo and behold, they had it completed in June.

0x Instant is a recent release from the 0x team. With Instant, you can add a widget to your app or website that enables users to purchase ERC20 and ERC721 tokens. 0x has not released a roadmap for 2019 yet. With its protocol, 0x takes the strengths of both centralized and decentralized exchanges while leaving their weaknesses behind. Off-chain order relays allow for the same low-cost operations that centralized exchanges offer without sacrificing personal asset management and fund security. The on-chain transaction settlements, in addition, give users all the benefits of decentralized trading, making it so that transactions are only cleared once both makers and takers hold up their end of the bargain. And both processes are managed via smart contracts for enhanced security.

Editor’s Note: This article was updated by Steven Buchko on 1.7.2019 to reflect the recent changes of the project.

The post What Is 0x (ZRX)? | A Guide to the ERC20 Exchange Protocol appeared first on CoinCentral.

Over the last eight weeks, the world has watched the yellow vest protests in France as the grassroots political movement...