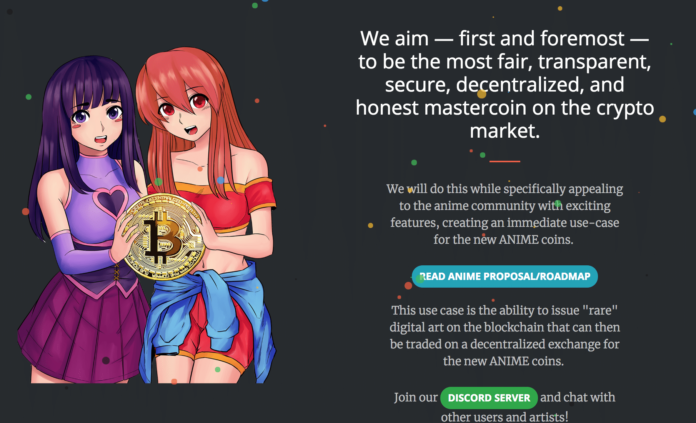 What is Anime Coin (ANI)?

Anime Coin is offering a platform for users to issue and sign, hold, and exchange anime-related digital items on the blockchain.

Anime is planning a fork of the original ANI coin into ANIM, which will bring on a few core features aimed to help accelerate the growth of the crypto anime community, support new artists, and incentivize high-end anime art collectors to use, interact with, and invest into the digital art community.

Anime Coin’s application of blockchain in the art space is done to address the issues of provenance (the chain of custody for a piece of art), copyright, ownership, valuation and appraisal, and authenticity of the anime art.

The online art sales world has been steadily growing ($3.75 billion in 2016 at an 8.5% share of the overall market). Projects such as Anime Coin are seeking to unite the cryptocurrency community with that of a specific art niche.

Before we do a deep dive into Anime Coin, let’s go over blockchain’s role on cryptocurrency artwork and decentralized collectibles.

The impact of blockchain on the art and collectibles is often misunderstood within the cryptocurrency world, let alone the general population.

Blockchain provides a solution to many of the fundamental issues that plague the art collection and creation communities today: ownership provenance, copyright, valuation, and appraisal, and authenticity of the art. Blockchain offers art creators a new medium for producing and selling digital art, without any the need for complications such as safely storing and protecting the physical elements of their creations.

The use of blockchain creates a vehicle for authenticity that doesn’t require leaps of trust or high-paid intermediaries – just math.

This is the point where it’s worth chiming in with what “market value” really is. The commonly accepted definition of market value is essentially the average of what price two (or many) buyers and sellers are willing to exchange goods. If a Japanese billionaire is willing to buy a Jean-Michel Basquiat painting for $110.5 million, that’s the market value of the painting at that time, much like the 6-figure CryptoKitty named Genesis had a market value of $114,481.59 at the time of the sale.

Digging deeper into blockchain and art, you’ll start to see entire communities built around entirely digital collectibles and art pieces. Much like the aforementioned CryptoKitties, projects like Anime Coin (ANIM) and PepeCash have created communities of people that have congregated around cryptocurrency art galleries. cryptocurrency artwork, and even blockchain art festivals.

What is Anime Coin ANI and ANIM?

ANIM network users can issue named image assets on the ANIM blockchain by paying a fee in ANIM. Users can specify a “roughly square shaped .JPG or .PNG image file under 10 megabtyes in size. The registration costs for the asset are proportionate to the number of bytes in the image.

Users can specify the name of the image asset such as Coin_Central_Goku4, as well as the asset quantity, let’s say 100.

The ANIM web-wallet will specify the asset name and quantity meta data with a link to the image file. The image files are stored in a trustless and decentralized way to prevent any dead links or missing images through the use of IPFS and being hosted by masternodes.

These assets will be held in the ANIM web wallet or paper wallet. Following our example, we’d have 100 copies of our Coin_Central_Goku4 in our wallet.

Images must be verified by masternodes to prove an image is valid in order to accept it into the exchange.

Each unique image can only be used once for a single ANIM asset, enforced by a standard image similarity algorithm that compares each image’s digital fingerprints used for assets on the ANIM blockchain. The image algorithm requires a high amount of computational resources and will only be run by the ANIM masternodes.

In order to create a unique “one of a kind” asset, called a Waifu Asset, users will have to run ANIM masternodes

In 2018, the Anime Coin team announced that ANIM will start as a fork of the MEME codebase. According to the site, 30% of the initial ANIM coin distribution will go to owners of MEME tokens on the fork snapshot date currently set at June 30th, 2018.

The remaining 70% of ANIM will will go to current owners of ANI coin on the fork snapshot date.

Anime Coin (ANI) is currently ranked 1400 on CoinMarketCap with usually under $10,000 in daily volume. If not dead, ANI coin is hardly even in the nosebleed seats. The team claims one of their biggest reasons is that this is a proven and fair way to distribute the initial ANIM coins. Additionally, anyone is able to buy ANI and MEME on the open market before the fork snapshot date and receive ANIM.

This form of distribution also puts the largest block of coins (which is about 35% of ANIM) into the hands of the anime cryptocurrency fans who have been in the cryptocurrency world and supporters in some capacity of ANI.

A second large block of coins (15% of the max suppy of ANIM) into the hands of the developers and owners of the MEME coin project in the hopes of aligning the interests of the MEME and ANIM communities to promote cross-fertilization of ideas and code between both projects.

ANIM will use the Equihash algorithm.

How to Buy Anime Coin ANI or ANIM?

Currently, Anime Coin (ANI) can only be bought on Cryptopia.

The coin emission schedule of ANIM is loosely based on Bitcoin’s with a max supply of 21 million coins.

ANIM will launch with an initial coin distribution of 50% of the maximum amount of coins.

There will be no treasury or development fund. 95% of the block rewards go to the miners. The Perks of Running an Anime Coin (ANIM) Masternode

An ANIM masternode will cost 1 BTC worth of ANIM to run, and will give owners certain privileges such as the ability to issue unique, indivisible blockchain assets (termed Waifu Assets). Waifu Assets will be required to be original and unique to a given anime character.

ANIM will give masternode owners 5% of the block reward, an amount significantly lower than other masternode coins that give 40% to 50% to masternode operators.

However, the proposal outlines a few perks that make becoming an ANIM masternode operator an attractive and potentially lucrative position.

What are Waifu Assets?

Waifu Assets can be listed on the exchange automatically after created. Other masternodes also have to vote on whether to allow the requested Waifu. Only one Waifu Asset is permitted per unique anime character. This limit helps create true scarcity on the platform, where Waifus will be seen as very rare (and valuable).

All proposed waifus have to specify the character they want using the ANIM web wallet by providing the URL to that character from animecharacterdatabase.com.

This is what generates a substantial amount of demand for ANIM Since it costs a high amount of ANIM to make a masternode, cryptocurrency enthusiasts and character-obsessed anime fans will be rushing to collect ANIM to start their masternodes.

Anime Coin also plans to create a tax on future “ANIM whales” who control high amounts of Waifus by distributing 25% of the sales proceeds from any Waifu sale on the ANIM decentralized exchange to the Foundation Fund,  a decentralized non-profit fund called the “Foundation” to supply young artists with free ANIM. The ANIM community votes on who should receive these coins, with someone who has more than 100 ANIM coins in a single address being able to vote.

While Anime Coin has been around for nearly 4 years as ANI, it appears the fork into ANIM will give the project and community new life.

The integration of Waifu Assets will help create an element of high-end scarcity, while up-and-coming artists will still be able to create their own digital assets for sale.

The proposal concludes on the note that if ANIM is able to hit a market cap of over $100 million, it could also technically serve as a “perfectly good general cryptocurrency” – one built on a potentially highly active and loyal community, referencing the fact that the almost-taboo Mt.Gox started as a Magic the Gathering website.

If the idea of a cryptocurrency token based on anime seems absurd, refreshing your perspective with some distance and a broader concept of market value may help. The 1909 card of Honus Wagner, the “greatest shortstop that ever lived”, sold for around nearly $4 million. Tens of thousands of people are passionate about “owning” trading cards, and are willing to spend thousands, or millions of dollars, on illustrated slithers of cardboard paper.

Art collection is centuries old and one of the world’s most expensive hobbies, yet centers around the manifestation of one person’s work on a canvas (or whatever resources more modern art scrambles together).

It’s worth exploring what the actual differences are between trading cards, art collection, and owning digital assets on platforms such as Anime Coin.

The post What is Anime Coin (ANI)? appeared first on CoinCentral.