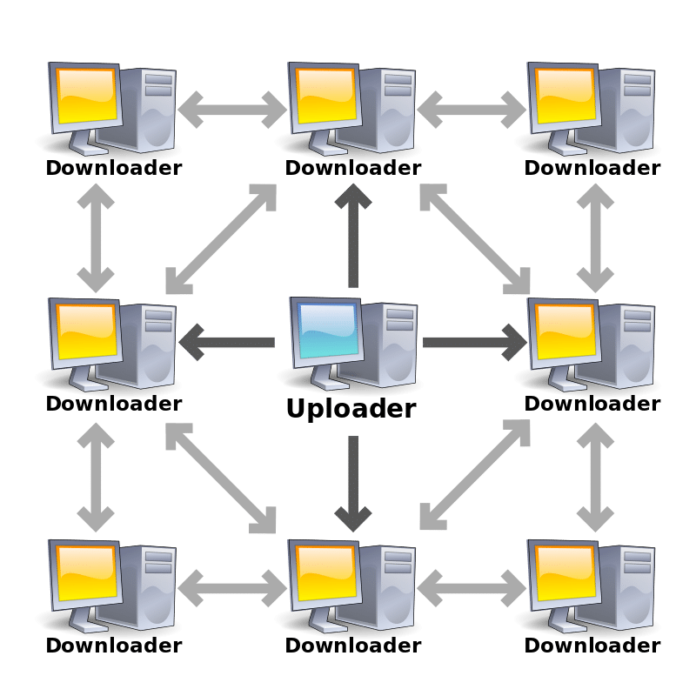 BitTorrent is a peer-to-peer file sharing protocol that recently launched a new cryptocurrency, BTT. The network enables you to download several different types of files quickly and for free from the Internet. Currently, over 170 million people use the protocol each month.

In this guide, we’ll go over:

How Does BitTorrent Work?

For illustrative purposes, it’s crucial to separate BitTorrent, the original peer-to-peer protocol, from BTT, the cryptocurrency that the protocol implements as a monetary incentive.

BitTorrent is an online peer-to-peer communication protocol for files and other types of data. Similar to a blockchain, BitTorrent is a distributed system with no central entity. Here’s how it works.

Seeds host files, otherwise known as torrents. When hosting, the seeds split the torrents up into several pieces, so that you can download them more efficiently.

When you download a file on BitTorrent, you receive different pieces of that file from multiple seeds. While downloading and after completion, you can opt to become a seed as well to help the network further. Choosing to not seed earns you the title of a leech. BitTorrent needs seeds for the system to survive, so leeching is frowned upon.

The entire network of uploaders (seeds) and downloaders for a particular file is a swarm.

BitTorrent existed long before the BTT token. Even today, you can use the free protocol without the token. According to the project’s whitepaper,

“BTT [acts] as a general purpose mechanism for transacting in computing resources shared between BitTorrent clients and a liquid market of service requestors and service providers.”

Alongside BTT, the development team introduces BitTorrent Speed. Because there’s no financial incentive to seed in the original protocol, swarms often die out prematurely. To solve this problem, BitTorrent Speed offers BTT rewards for users that continue to seed after downloading a file.

On the other side of the BTT equation, you can buy priority access to seeds, the continued availability of a file, and the use of others’ resources with your tokens.

The end goal for the BTT implementation is for BitTorrent to become an entire content ecosystem, including content delivery, decentralized storage, and proxies.

Bram Cohen created BitTorrent in April 2001 and released an updated version in 2013. In June 2018, Tron founder Justin Sun purchased BitTorrent for $120 million as a means to expand Tron’s Project Atlas. Cohen is no longer with the company, and several original staff members have left as well.

There is still a lot in development for the merger of the two decentralized companies. BitTorrent Speed isn’t available yet, but the team states that they’ll launch it sometime this quarter. Additionally, BitTorrent Live, a live video streaming service, is accepting sign-ups for an upcoming beta. However, the team has not announced a release date for this product.

With over 100 million users between Tron and BitTorrent, this project is leading the pack of peer-to-peer file sharing systems.

Another popular blockchain-based file sharing platform is Upfiring. However, Upfiring encrypts every file that seeders host whereas BitTorrent does not. With the nearly endless number of use cases in file sharing, there should be room for both to prosper.

BitTorrent has been one of the better performing cryptocurrencies of 2019. BTT launched with an IEO price of $0.00012, and after some initial volatile trading, the price settled in around $0.0008.

The price started climbing in the middle of May, peaking at an all-time high of $0.0018 at the end of May. There doesn’t appear to be any news correlating with this run-up, so we can chalk it up to the price just following the market at that time. The BTT price currently sits around $0.00134 – already ten times higher than the price during its ICO.

If investing, keep your eye out for the upcoming Speed and Live releases. Both of these products could give a nice boost to the price.

Where to Buy BTT

Your exchange options to purchase BTT are virtually endless. UpBit currently has the highest amount of BTT trading volume as a pair with KRW.

Because you likely don’t own any KRW, you should look to Binance for your BTT trading. It’s available in exchange for BTC, BNB, and various stablecoins on the platform.

If you’re new the cryptocurrency investing, check out our guide on how to buy bitcoin to get started.

Where to Store BTT

BTT is a TRC-10 token utilizing the Tron network, so you can store it in any wallet that supports TRX. Tron has a whole host of community-created wallets that the team promotes on the project’s official website.

Besides KIN (which is likely to end horribly), BitTorrent is one of the most extensive attempts to tokenize an already successful network. On the surface, adding a token to incentivize seeders in the system makes sense. We won’t know for sure, though, until Speed and other additions like Live hit the market. Until then, it’s just another game of altcoin speculation roulette.