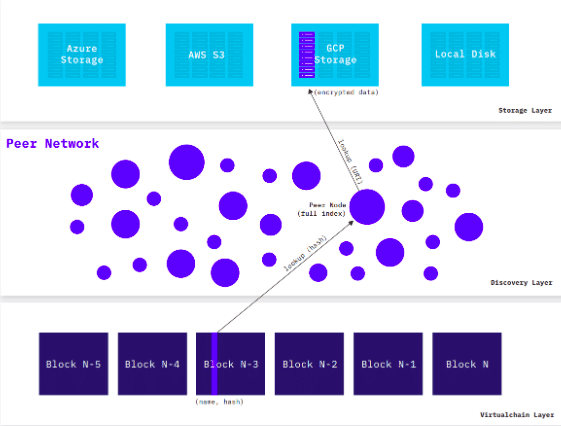 Blockstack is a decentralized computing network and ecosystem for decentralized applications (dApps). The project recently made headlines as the first token sale in U.S. history to receive clearance from the Securities and Exchange Commission (SEC). The team has been together since 2013, however.

The Blockstack team’s overarching goal is to give users control of their data and identity. They’re accomplishing that goal by providing a suite of developer tools and protocols intended to lower the start-up barriers of dApp development.

In this Blockstack guide, we take a look at:

How Does Blockstack Work?

Blockstack is a comprehensive ecosystem containing numerous components that enable you to go from “Zero-to-DApp” in less than an hour. Let’s examine a few of the necessary parts.

As you could probably guess, the Stacks blockchain is the foundation of Blockstack. It implements a leader election process with Tunable Proofs to maintain consensus. The Tunable Proofs enables Blockstack to combine native Proof-of-Work (PoW) consensus with the hash power of a more established blockchain.

Currently, the Stacks blockchain includes a combination of its own Proof-of-Work and a Bitcoin Proof-of-Burn consensus. To become a leader (miner), you burn the underlying cryptocurrency (bitcoin) and commit a set of transactions. You receive a mining reward if your transactions match the ‘winning’ chain.

Once the network is large enough, the Blockstack team plans to switch the Stacks blockchain over entirely to a native PoW consensus.

One of the project’s first features, Blockstack Authentication, connects your identity to all of the dApps in the Blockstack ecosystem. It utilizes single sign-on with your universal username, and in place of passwords, public key cryptography that runs on your local device’s software.

Authentication is entirely on-chain, maintained by the Blockstack blockchain and Blockstack Naming System.

According to the Blockstack whitepaper,

“[Gaia is] a user-controlled storage system that enables applications to interact with private data lockers.”

Individuals, rather than the Stacks blockchain, host these data lockers. Instead, the blockchain records pointers to a piece of data’s Gaia location. As with other forms of blockchain storage, Gaia removes the need to trust third-party cloud storage providers like Amazon and Google.

The Blockstack developer community has a substantial (and growing) list of tools to help developers build Blockstack applications. The list includes, but isn’t limited to libraries for:

If you’re a novice developer, the team also provides a tutorial on creating a dApp in under an hour. The app mining reward decreases by 20 percent with each drop in ranking. | Source: Project website

Blockstack has partnered with four independent companies (Product Hunt, Awario, TryMyUI, Internet Labs), which rate the apps using their distinct proprietary data. Your app’s ranking depends on which Blockstack features you’ve integrated, how you’ve improved since the previous month, and how many standard deviations you are away from the average score in your category, among many other aspects.

The Stacks token is the native token of the Blockstack ecosystem. You spend STX to register digital assets, execute smart contracts, perform transactions, and anchor app chains, among other activities.

Blockstack, created by Muneeb Ali and Ryan Shea, initially launched in 2014 as a decentralized identity system. Throughout 2015 and 2016, the team created the Blockchain Naming Service and brought on two additional team members.

In the second quarter of 2017, they launched the Blockstack Authenticator and published the project’s whitepaper. At the end of that year, the team held a token sale in which they raised about $50 million.

Throughout 2018, the Blockstack team released several development libraries, launched a universal store for dApps, and created the Stacks wallet among several other accolades.

Already this year, Blockstack created a prototype for their VM and released a new consensus algorithm. On deck for the rest of 2019 and 2020:

The project has received investments from some of the top venture capital firms in the world, including YCombinator, Union Square Ventures, and Winklevoss Capital.

Where to Buy STX

The Stacks token sale is fully regulated by the SEC under Regulation A+, so expect to provide personal information for Know-Your-Customer (KYC) and Anti-Money Laundering (AML) laws.

The token sale began on July 11 and will continue until the project raises $28 million. To register, head over to the Stacks token sale registration page.

Where to Store STX

You should store your STX in the official Stacks wallet. It’s available on Mac and Windows operating systems. For additional security, consider using a hardware wallet like Ledger or Trezor as well. The Trezor One, Trezor Model T, Ledger Nano S, and Ledger Blue all support STX storage.

Note: To perform transactions in the Stacks wallet, you need to supply a small amount of bitcoin as fuel.

The Blockstack team envisions an entirely decentralized Internet on the horizon and their ecosystem at the base of it.  The project is an ambitious undertaking, but the team has shown that they get results through continuous development milestone achievements. It also helps that they have the support of some of the biggest names in blockchain, cryptocurrency, and venture capital.

Although the current token sale requires some KYC input, it’s worth a look.

The post What Is Blockstack (STX)? | The First SEC-Qualified Token Offering appeared first on CoinCentral.