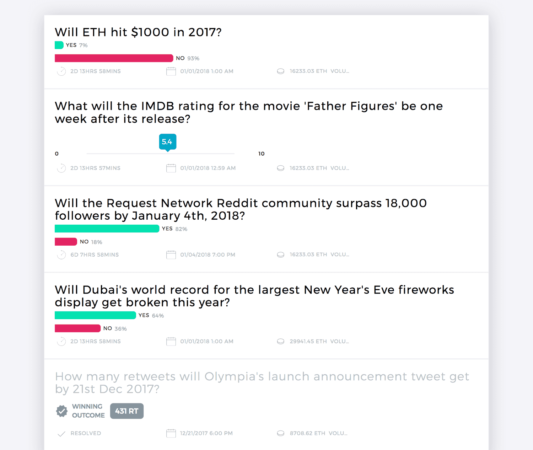 In this Gnosis beginner’s guide, we’ll take a look at:

How does Gnosis work?

To describe how Gnosis works, we first need to outline what exactly a prediction market is and why they’re valuable.

A prediction market utilizes user predictions to aggregate information about future events. Users in the market trade tokens that represent the outcome of a certain event. Because some outcomes are more likely to occur than others, these tokens end up having different values in the open market.

As the time passes or related events unfold, some token outcomes may be more likely to happen thus increasing their value. Once the event occurs, the tokens representing the final outcome receive full value while the rest of the tokens become worth nothing.

Let’s try out an example:

A user registers an event question on the prediction market, “Where will Amazon locate its new headquarters?” She includes the answer options: Chicago, Atlanta, Austin, New York, and Other. “Other” must be included to ensure that the probability of all answers adds up to 100%. If she didn’t include “Other”, there would’ve been a possibility that none of the answers end up being correct.

When the market opens, Other tokens probably fetch the highest price because it’s incredibly likely that one of the hundreds of other cities will get the bid over the four specific options. However, as cities get eliminated, the prediction market prices will adjust accordingly.

Say Amazon announces a final four city selection: Chicago, Atlanta, Los Angeles, and Boston. The prices for the Austin and New York tokens will almost immediately drop to zero as people rush to sell their worthless tokens. If the news is well-known, most holders won’t even be able to find a buyer.

Now, the prices even out to reflect the announcement news. The price of an Other token should be about twice that of the Chicago and Atlanta tokens. However, this may not be the case. The community may believe that, even with the announcement, Chicago has by far the best chance of being chosen. Therefore, the Chicago token may have a higher price than the Other token even though it’s one city against two.

Finally, Amazon announces that they’ll be setting up shop in Chicago. The prediction market closes and Chicago token holders can claim their reward.

There are two ways to make money in a prediction market. The obvious way is to correctly predict the outcome of events. Less obviously, you can trade outcome tokens for a profit as the market conditions change.

The Value of Prediction Markets

Prediction markets take advantage of the “wisdom of the crowd” – a phenomenon in which the collective predictions of a group of people is usually more accurate than that of an individual, even if they’re an expert.

There’s no end to the types of scenarios that prediction markets help to…predict. They’re useful in gathering information for topics like climate change, epidemics, and price forecasting. You can also use them for different governance models to determine policies that will have the most positive effect on the entire population. And, they’re valuable for insurance purposes to help hedge risks.

The financial sector has also found prediction markets to be useful in probabilistically determining the future prices of assets.

Olympia is Gnosis’s test version of their prediction market app. They host free tournaments in this product, so you get a chance to try it out without having to spend money. Every two days, the team allocates you a certain amount of Olympia (OLY) tokens that you use to bet on different prediction markets. If you do well in the market, you win Gnosis (GNO) tokens. You can sell GNO on the open market which gives them some monetary value.

The next phase of Gnosis is its Management Interface. The team released a beta version in December 2017 but haven’t announced a date for the main net release. The Management Interface is basically your dashboard for Gnosis’s prediction markets. It’s here that you check your balance, participate in markets, and even create your own market.

Gnosis includes two types of tokens: Gnosis (GNO) and OWL. GNO are the ERC20 tokens that the team sold during their ICO. They created 10 million GNO tokens and aren’t minting any additional ones. These are the tokens that you see being traded on the open market.

By staking GNO, you receive OWL tokens. To do this, you must lock your GNO in a smart contract making them non-transferable. The amount of OWL you receive is dependent on the length of your lock period as well as the total supply of OWL tokens in the market. The team is aiming to have 20x more total OWL than the average amount of monthly OWL usage over the previous 3 months. You use OWL tokens to pay for fees on the platform, and 1 OWL always equals 1 USD. Gnosis doesn’t collect the token fees but instead burns them, taking them out of circulation. You can also pay your fee with any other ERC20 token. When you choose this option, Gnosis buys GNO with your fees and burns the GNO.

Ideally, this burning and staking mechanism will limit the GNO supply, increasing its value. On the other hand, Gnosis will adjust the OWL distribution to ensure that it always is at $1.

The Gnosis team is led by Martin Köppelmann (CEO), Stefan George (CTO), and Dr. Friederike Ernst (COO). Köppelmann and George began working on the platform in January 2015 as one of the first ConsenSys partners. By August of that same year, they launched the alpha product as the first major dapp on Ethereum.

In April 2017, the project held somewhat of a controversial Initial Coin Offering (ICO). Using a dutch auction style of raising funds, the team hit their $12.5 million hard cap in ten minutes while retaining 95% of the tokens. Amidst backlash, the team locked the tokens in a vault and have promised not to dump them on the market. They’ll give at least a three-month warning before selling any of the tokens.

The team includes quite a list of reputable advisors including Joseph Lubin (Ethereum co-founder and ConsenSys founder) and Vitalik Buterin (Ethereum founder and chief scientist.)

Augur is Gnosis’s main competitor. With a slightly earlier start, the Augur team is also creating a prediction markets platform. Some argue that with a fairer token distribution and decentralized oracles, Augur is the less centralized of the two.

Another difference – Augur uses ETH for market trading and REP to reward the oracles that report the outcomes of events while Gnosis has the token reward structure outlined above.

Gnosis had a successful start reaching an all-time high Bitcoin price of 0.141 BTC (~$357) in July 2017. Since then, though, the GNO price hasn’t fared well. It saw some upward movement in December 2017 and the beginning of January 2018 with the rest of the market, but its price relative to Bitcoin was nearly unchanged.

The token is currently priced at about $70 (~0.00862 BTC) – magnitudes less than its all-time high. With only 10% of the tokens in the market, this isn’t a good sign. As the team sells their majority share, the price could decrease even further. On the other hand, product releases may give some support to the GNO price as the tokens would then have increased use.

Where to Buy GNO

You can purchase GNO with either Bitcoin or Ethereum on Bittrex, Poloniex, and Kraken. If you’re confused on where to begin, check out our guides on how to buy Bitcoin and Ethereum.

Where to Store GNO

GNO is an ERC20 token, so you can store it in any ERC20 compatible wallet. Your safest option is to use a hardware wallet like the Ledger Nano S. You should also consider MyEtherWallet to store your GNO – a free, albeit, slightly less secure choice.

Gnosis also provides a LightWallet and will be releasing the Gnosis Safe wallet sometime this year.

Gnosis is creating the infrastructure for prediction market applications. Additionally, the project includes an in-house developed Dutch Exchange, multisig wallet, and robust developer tools. The team has a mission to make Gnosis the world’s most efficient forecasting tool while providing users with the best experience in customized information searches.

Even with a lopsided token distribution, the team seems to hit their objectives and build quality products. The growth of machine learning and crowdsourcing in forecast models brings the potential for Gnosis to contribute greatly to an increasingly valuable market.

The post What is Gnosis (GNO)? | Beginner’s Guide appeared first on CoinCentral.