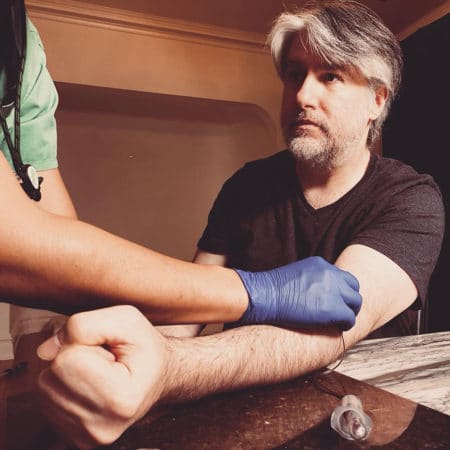 What is IAMA Coin?

IAMA Coin (or I am a coin) is a collection of both physical and digital artwork by Kevin Abosch. Abosch created 100 physical pieces of art and tied them to the Ethereum blockchain with “virtual art”. He uses the “virtual art” here to describe the project’s ERC20 token, IAMA. There are, and only ever will be, 10 million pieces of IAMA virtual art in existence.

As an IAMA token holder, you can do with your tokens as you wish. You can sell them, keep them, or even break them up – they’re divisible up to 18 decimal places. Abosch makes it clear that “any fraction of an IAMA coin has the same intrinsic artistic value as one [whole] IAMA Coin.”

Abosch has stamped every piece of physical art with the contract address for the creation of the IAMA that exist on the Ethereum network. He didn’t just stamp the pieces with ink, though. He literally put his blood (which may have included some sweat and a tear or two) into the stamps.

Over time, the physical works will become available to IAMA coin holders.

What does it all mean?

In the IAMA Coin project, Abosch compares humans to a newly minted coin. We’re priceless, “yet we are constantly being ascribed a value.” Abosch feels as if life is oftentimes reduced to a series of transactions for personal gain.

By tying his blood to the blockchain, he wants to show the world that deep down, he is like a coin.

Where can I buy IAMA?

Unfortunately, you can’t purchase IAMA tokens just yet. Abosch is first making the virtual artwork available to existing collectors and afterward, to the general public. He hasn’t stated a date on when this will be, though. However, looking at the wallet activity, it appears that he’s already made some transactions with a few collectors.

Where can I store IAMA?

You can store your IAMA in any wallet that’s ERC20 compatible. MyEtherWallet is a popular online choice while the Trezor is a solid hardware wallet option.

Who is Kevin Abosch? Kevin Abosch is a popular Irish artist and photographer. He’s worked with such notable people as Johnny Depp, Yoko Ono, and Malala Yousafzai. His most valuable work, though, is a photograph of a potato. Potato #345 sold for one million euros to a European businessman – one of the most expensive photographs ever purchased.

Even without his potato payday, Abosch has had a fairly lucrative career. His iconic, black background portraits start at $150,000 and can run up to well over half a million dollars.

Abosch wasn’t always an artist, though. He first began his career as a biologist with a passion to learn new technologies. His first photography gig was while he was working at CBS Records. The company needed someone to photograph a band, and Abosch threw his hat in the ring. After trying for a $5,000 paycheck, he negotiated down to $2,500 for the work. With that baseline set, he continued to take on more jobs and the rest is history.

IAMA Coin isn’t Abosch’s first digital work either. He also founded Kwikdesk, a website that allows you to anonymously exchange information. You don’t need an email or password to use the platform, and it doesn’t track cookies or IP addresses. Additionally, the information that you send self-destructs on the date of your choosing – anytime between 24 hours and 10 days after you send it.

Additionally, Abosch created OneOne, an untraceable messaging app for your mobile phone. Like Kwikdesk, there’s no need to create an account on the app. You just open up one of your seven channels, invite another participant, and begin chatting. After 24 hours, the app deletes the messages. Each participant also has the option to delete the messages from both users’ phones at any time.

Unfortunately, though, the team shut down OneOne in 2016 due to “insurmountable pressure from governments that don’t share our view that privacy is a human right.”

As if Abosch wasn’t busy enough already, he recently partnered with Andy Tian (creator of Gifto), to donate $1 million of Ethereum to CoderDojo through their Forever Rose project. CoderDojo is a network of volunteer-led, computer programming clubs for children. In an effort to make development available to anyone, the clubs are completely free.

With projects like Kwikdesk, OneOne, and Forever Rose under his belt, it’s no surprise that Abosch is now focusing on the blockchain.

The IAMA Coin project begs the question, “Where do we draw the line for what we consider art?” Most people don’t consider the blockchain “art”, but computer programming has often been described as both beautiful and/or ugly. To find the answer, we can consult one of the questions from IAMA Coin’s list of FAQs:

Although the question focuses on beauty, it can easily transition to art. As technology and traditional art continue to merge, the line between the two is becoming increasingly blurry. In the end, it’s really up to your own thought process. If skyscrapers and homes, once considered to be just functional structures, are now widely known as works of art, why can’t the blockchain be too?

The post What is IAMA Coin? | Ethereum Artwork Stamped in Blood appeared first on CoinCentral.

A Russian official has refuted claims that Venezuela offered to repay its debts in its newly-launched Petro cryptocurrency, Reuters reports...