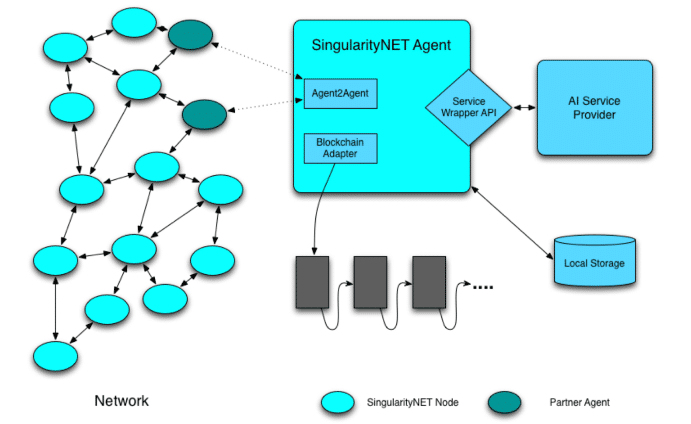 SingularityNET is a decentralized marketplace for Artificial Intelligence (AI). The business value of AI is becoming clearer each day; however, there’s a significant gap between the people developing AI tools (researchers and academics) and the businesses that want to use them. Most organizations need a more customized solution than what a single AI project can offer, and research projects oftentimes have trouble accessing a large enough data set to build effective machine learning. SingularityNET closes these gaps.

In this SingularityNET guide, we’ll cover:

How Does SingularityNET Work?

SingularityNET is a complex project – there’s no doubt about it. Although starting the platform as an AI-as-a-Service marketplace, the team plans to evolve it into a completely self-organizing AI network. The end goal is for the AI Agents in this autonomous network to eventually use AI to outsource work to each other and evolve together to further develop the network – very meta. Let’s start with the basics first, though.

Keeping things simple, SingularityNET is launching as a marketplace for AI services. Specifically, the team chose to focus on three distinct areas of AI for the first two years of development:

The platform also uses smart contracts to facilitate other types of services such as matchmaking the favorable combination of exchanges between Agents and powering votes for governance issues. SingularityNET uses a DSOC democracy for its governance model.

Before moving forward, it’s important for us to define SingularityNET Agents. Agents are the entities that execute the smart contracts on the platform. These are most commonly nodes on the network.

To maintain network validity, Agent’s rank each other after each exchange on a 0 or 1 scale. Leaving a ranking isn’t required and can also be automated. If an Agent marks a task complete and sends payment, it’s safe to assume that a 1 ranking is appropriate.

Agent rankings are multi-faceted, though, expanding beyond simple exchange reputation. Other factors that determine the overall ranking of an Agent include:

The long-term vision of the SingulairtyNET team is to build a network of complex AI Agent interactions primarily using resources from the OpenCog Foundation. To look at this further, let’s check out their in-house built humanoid robot, Sophia.

Sophia uses a combination of AI Agents that range from natural language processing to physical motor controls to operate it (her?). You tell Sophia to summarize a video that’s embedded in a webpage. To do this, Sophia sends a request to Agent A. Through its AI, Agent A knows that Agent B specializes in analyzing and transcribing video while Agent C specializes in summarizing text.

Agent A pays Agent B and Agent C to perform these tasks while Sophia pays Agent A to coordinate. All the while, each Agent has updated their own AI with the network information gained from these tasks and combines it with their previous experiences and knowledge. Therefore, the collective AI of the system grows at a faster rate than any individual Agent on its own.

Getting even more sci-fi, AI Agents will eventually be able to produce new AI Agents from the information that they obtain overtime. This network grows and self-organizes automatically.

SingularityNET’s AGI token is an ERC20 token, but this may not always be the case. Voting through the governance model mentioned earlier will determine if/when the platform will move from Ethereum to another platform or even its own network.

Agents primarily use AGI to make payments for AI services. However, the tokens also give Agents voting power for certain decisions that affect the platform.

The SingularityNET Genesis Contract minted 1,000,000,000 AGI tokens at the time of ICO. They were distributed accordingly:

The team releases the reward pool tokens over ten years to the Agents participating in the network post-launch. After that time period, they’ll vote on whether to create a new reward pool or choose some other type of mechanism.

The SingularityNET team boasts 50+ members with 10+ PhDs. Dr. Ben Goertzel leads the group as CEO and Chief Scientist. He’s also the Chairman of the OpenCog Foundation and the Artificial General Intelligence Society, as well as the Chief Scientist at Hanson Robotics, the partner company helping bring SingularityNET to life.

Dr. David Hanson, founder of Hanson Robotics, serves as the Robotics Lead. Most famously, Hanson Robotics built Sophia, the most expressive humanoid robot to date. Sophia is also a proud member of the SingularityNET team.

In early 2018, the team released the alpha version of the platform. They haven’t announced an exact date for the beta release, but according to their roadmap, it should be sometime soon. Other features and services currently in the pipeline include (but aren’t limited to):

In January 2018, SingularityNET partnered with Nexus to help them achieve their goal of building a three-dimensional blockchain.

SingularityNET is unique in the blockchain space. The only other notable project working with AI is the NEO-hosted, DeepBrain Chain. Although both projects have similar long-term visions, DeepBrain Chain is first focusing on shared computing power to perform machine learning related tasks whereas SingularityNET, as you know, is beginning as an AI marketplace.

In fact, the two projects decided to join forces in June 2018. With this partnership, SingularityNET and DeepBrain Chain combines the data and processing power of their networks to create one mega-network.

The AGI price is likely to increase with the public beta launch and/or news of partnerships with reputable AI companies. As with many altcoins, though, AGI is at the mercy of the overall health of the market and Bitcoin price swings.

Where to Buy AGI

AGI is traded with the most volume as a trading pair with Ethereum and Bitcoin on Binance and KuCoin.

If you need to pick up some Bitcoin or Ethereum, Gemini is a great choice.

Where to Store AGI

Because AGI is an ERC20 token, you need to store it in a wallet with ERC20 support. The recommended option is a hardware wallet like the Ledger Nano S.

If you don’t want to shell out the cash for a hardware wallet, you can use MyEtherWallet for free.

Down the road, SingularityNET may move off the Ethereum blockchain and onto their own or another platform’s chain. When this happens, you’ll most likely have to move your AGI tokens to an official SingularityNET wallet. Be on the lookout for announcements from the team if/when this happens.

SingularityNET is an AI service marketplace soon to be self-organizing AI mega brain. Although the project is young, it’s already made a big splash in the community with a $36 million ICO that sold out in about a minute. The project brings together two of technology’s hottest fields: AI and the blockchain.

If the team achieves its lofty goals, they may just create the AI-centric future that we all hoped, or feared, would someday come.

Editor’s Note: This article was updated by Steven Buchko on 11.28.2018 to reflect the recent changes of the project.

The post What Is SingularityNET (AGI)? | A Guide to the Artificial Intelligence Marketplace appeared first on CoinCentral.