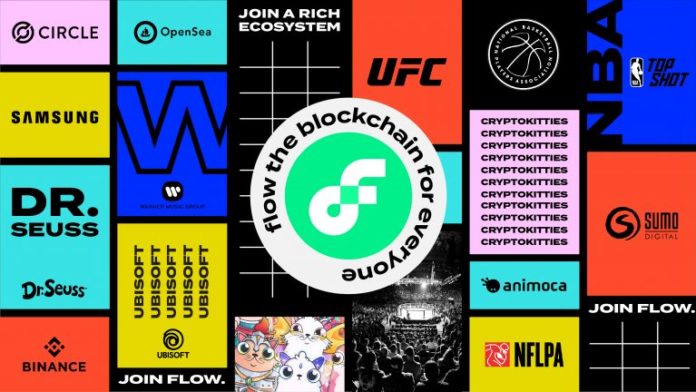 Developed by the team behind some of the most successful crypto applications in the world, Flow is a blockchain re-designed from the ground up to be user- and developer-friendly as well as modular and future-proof. The network is already being used to develop digital collectibles offerings for top global brands like the NBA and UFC who partnered with Dapper Labs to serve their billions of fans. You can now take part in the revolution of the digital assets space by joining the FLOW community token offering.

Dapper Labs, the company behind CryptoKitties and NBA Top Shot, a year ago revealed that it developed a new blockchain called Flow. Designed to bring digital assets and decentralized apps to the mainstream, Flow is built for scale, speed and security like no other blockchain available today. The network is expected to have a large built-in user base from day one as Dapper Labs already have impressive partners it is developing digital collectibles solutions for including the NBA, Warner Music Group, Dr. Seuss, Ubisoft, and UFC.

It is no surprise that top global brands choose to work with the developers of Flow as it is the only protocol layer team that has a proven track record of developing great consumer blockchain experiences. The Flow team is composed of leading researchers and experienced production engineers who have worked together for years defining a novel approach to blockchain architecture. And with over $40M in financing, notable investors in Dapper Labs include Andreessen Horowitz, Union Square Ventures, Venrock, Google Ventures and Samsung.

The Flow network is powered by a balanced native token design and novel distribution mechanics. The FLOW token enables participation on the platform, with the opportunity to earn rewards through network participation. Demand for FLOW token directly increases with activity on the platform as well as demand for secondary tokens minted on top such as stablecoins or governance tokens. To bolster decentralization Dapper Labs will hold a FLOW community token offering on CoinList.

A Solution Built for the Digital Metaverse

The amazing success of CryptoKitties proved that non-fungible tokens (NFTs) and crypto games are here to stay, but also that a new approach to blockchain is needed to make sure they can scale for mainstream adoption. In late 2017, when the collectibles game exploded in popularity, it congested the Ethereum network – causing gas prices to skyrocket and transaction times to become unbearably long. For blockchain solutions to reach billions of people as mobile apps and the internet does today, an underline infrastructure network will have to be able to scale seamlessly without such limitations.

In addition to Ethereum’s scaling limitations, most of the scaling solutions developed simply push complexity to developers or compromise on decentralization. Additionally, available blockchain platforms are unusable by most users because of onboarding barriers. These are some of the reasons why Dapper Labs decided to build the Flow blockchain for the past couple of years. Flow’s novel four-node architecture achieves massive improvements in speed and cost that scale with hardware capacity without compromising decentralization or breaking up the network into shards or “layer two” solutions.

Many in the community believe that the combination of NFTs and DeFi will be the key to unlock the next wave of mainstream crypto adoption. With a developer-first approach, Flow makes building new apps and protocols safe, fast, and efficient.  Flow also includes many features that take care of the inherent complexity of decentralized systems. This will allow any interested decentralized app developers to easily adopt Flow for their needs and thus unlock a rich ecosystem (metaverse) that intertwines entertainment and true digital economy like never seen before.

To learn more about the Flow blockchain and what you can build on it visit the project’s site at onflow.org, and make sure to join the vibrant community on Discord. To take part in the opportunity to revolutionize the digital assets space check out the FLOW community token offering on CoinList.

This is a sponsored post. Learn more on how to reach our audience here. Read disclaimer below.

There are two aspects of a project that every user needs to understand before testing the waters. These pertain to...