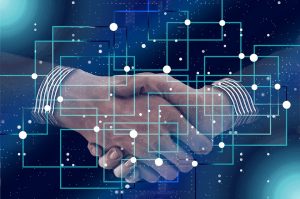 Ripple may be facing legal and existential battles right now, but that hasn’t stopped the company from pushing on with its payment improvement agenda. Indeed, while legal minds decide whether or not XRP is a security and crypto purists argue whether or not Ripple is a decentralized network, the company has announced a partnership with PNC. Listed as one of the top ten largest banks in the US, PNC generated more than $16 billion in revenue last year thanks to a client base of eight million customers. As part of the new deal, PNC will join the ever-expanding RippleNet and now offer commercial customers the ability to settle cross-border transactions in real-time.

“A commercial client in Pennsylvania receiving a payment from a UK buyer will be able to receive payments against their invoices instantly, transforming the way they manage their accounts receivable and allowing them to better manage their working capital,” reads Ripple’s September 19 press release.

Partnerships Are Positive but Perception is Better

For Ripple, the addition of another high-profile client is great news for its network. However, is it really good news for those invested in the price of XRP? Although those looking to buy XRP often base their decisions on the moves Ripple are making, there are some flaws in this way of thinking. Firstly, Ripple and XRP aren’t one in the same. In reality, Ripple is a company that’s built a decentralized payment system on top of XRP (a digital token). Theoretically, there is nothing stopping another company doing the same thing. However, confusion arises from the fact that no one else has done so. Additionally, Ripple was gifted the XRP token by its creators and currently owns the majority share of coins on the market.

Because of this, even though they are two distinct entities, the price of XRP is often predicated on the ups and downs of Ripple. In this sense, now would be a good time to buy Ripple online (i.e. XRP) because the latest announcement is clearly a positive. Forging a working relationship with a US bank active in 19 states and boasting eight million customers means a world of potential for Ripple. As it often does, perception often has a stronger bearing on the financial markets than reality. In this case, the perception that XRP now has more value because of PNC will certainly cause a mini price surge. However, in practice, the deal may not be as useful as it may seem. The likelihood is that PNC will join dozens of other banks on the xCurrent system.

xCurrent vs. xRapid Will Define the PNC Partnership

Unlike xRapid, which uses the XRP token to settle cross-border transactions, xCurrent doesn’t. Although it uses a similar decentralized dynamic, XRP isn’t part of the mix. Therefore, even if xCurrent became the default system for all banks, it shouldn’t really help the price of XRP. Again, however, because of the confusion surrounding the Ripple platform and XRP, investors may still be tempted to buy. However, it’s not all misconceptions and perceptions that may buoy the value of XRP in light of the PNC partnership. Even though it’s not been confirmed, there is a chance PNC may start using xRapid. At this stage, we know two things about the XRP-driven platform. Firstly, we know recent trials have been successful. Secondly, we know that two major companies, MoneyGram and Western Union have been using it.

What this suggests is that the platform is working and, moreover, at least two financial institutions believe it has some utility. From that, it isn’t a stretch to suggest that PNC may want to join the party. Should it do that, there would be a direct link between the partnership and the value of XRP.  Indeed, with the bank now linked into the RippleNet mainframe, connecting to xRapid would be easy. Those that believe this is a possibility should certainly consider buying Ripple (XRP) now because where one bank goes, others could easily follow.

However, until that time, it may be wise to hold fire. That doesn’t mean you shouldn’t invest now; what it does mean, though, is that you should exercise caution. The price in dollars was $0.51 on September 24, which was down 10% on the previous day. This suggests investors aren’t too sure on the PNC announcement just yet. At this price, there’s certainly room to make a profit. However, it’s important to remember that you’re hedging your bets on whether or not PNC will embrace xRapid or join its peers on xCurrent.

Pushing the Boundaries of Economic Change: Bitcoin as a Medium of Exchange in Africa

Bitcoin is pushing the boundaries of economic change in Africa. In East Africa, a new deal between digital currency exchange...