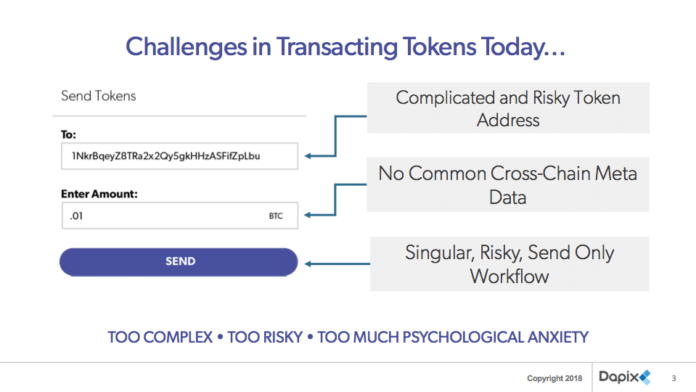 If you find yourself lost in the fray of the dozens of different blockchain wallets and exchanges, you’re not alone. Many people have to navigate the winding paths between storing and sending their cryptocurrency, and the lack of interoperability between wallets adds another element of complexity.

Since there’s a relatively high barrier to cryptocurrency usage, many token holders opt to simply sit on their tokens instead of using them for what (most of) them were intended for – to be spent and traded. Most digital wallets are more like digital vaults as opposed to true digital wallets that simply serve as a means to facilitate transactions.

That’s the issue the Foundation for Interwallet Operability (FIO) is looking to tackle. FIO recently launched a decentralized, open-source blockchain protocol that enables users to send and receive tokens form any FIO enabled wallet with an enhanced user experience. Participation in FIO is open to all wallets and exchanges and it currently includes Shapeshift, KeepKey, Coinomi, BRD, Edge, and MyCrypto.

The protocol is being developed by Access Venture Partners incubated Dapix, Inc. We connected with Founder & CEO David Gold. Gold is an 11+ year venture capital veteran and can trace his roots to being an entrepreneur in the dot-com era.

Your past is peppered with a number of successfully incubated projects while as Managing Director of Access Ventures Funds. What factors made you decide to branch away from angel investing and take on the role of CEO of Dapix?

To clarify, Access Venture Partners is a diversified early stage technology venture capital fund versus an angel fund. I jumped in to lead our blockchain investment efforts a few years back at Access. I quickly found myself feeling similar to how I did during the early dot com days… I saw the huge potential that blockchain could have if it achieved its vision of enabling the exchange of value to be as easy, fast and decentralized as the exchange of information is today. But I also saw how bad the current technology was from a usability standpoint… just like those early days of the internet (Mosaic web browser on dial-up with text only pages was pretty awful!).

I began researching projects that were attempting to improve the user’s experience with blockchain. Finding nothing compelling I started thinking about how to solve the problem, which is where the concept behind Dapix and the FIO Protocol was formed. We incubated the company out of Access and when we began recruiting a CEO, I felt so passionate about the potential around solving this critical problem for the blockchain ecosystem I decided to jump in and return to my operator roots to run the company.

What milestones are being assessed to know when it is best for Dapix to transfer the protocol to the FIO Foundation?

The technology being developed by Dapix will be transferred completely to the Foundation when the mainnet is launched and FIO tokens minted. That likely will be during our beta test period.

What are the plans for the FIO token distribution leading up the mainnet as well as after its launch?

The FIO token is a utility token with it’s first envisioned uses being registration of FIO Addresses and small transaction fees to high volume business users (think ecommerce sites) for the higher volumes they are running on the protocol and the enhanced FIO Data they will want to utilize… everyday users won’t see any transaction fees as each FIO Address comes bundled with a meaningful volume for each year.

Could you expand on the role the FIO foundation will have after Dapix hands over the reigns? Specifically, what does the relationship between individual members and the FIO foundation look like when it comes to decision making and software changes?

The FIO Protocol is a Delegated Proof of Stake blockchain. Block producers will be voted on by token holders directly and indirectly via elective proxy of their vote. Block producing nodes will vote on software changes/upgrades in order to approve them for implementation.

The Foundation’s role will include funding, both internally and externally, projects that can enhance the FIO Protocol. In addition, the Foundation will organize the flow of FIO Improvement Proposals (FIPs) from the community and provide research and assessment of the potential value of those proposals as a service to the block producing nodes and community to help them evaluate those proposals.

Human-readable public addresses seem pretty appealing when compared to their current state. Will FIO addresses function similar to a DNS in that each public address will also have its own unique human-facing version too?

Close but not exactly. If each public address had its own unique human-facing version that would mean that every token/coin in a users wallet could have a different human-facing version. That’s one of the reasons why a blockchain specific solution to usability won’t work.

FIO Addresses are human readable wallet addresses that work identically for every single token or coin in the user’s wallet or exchange account. Since FIO doesn’t require the blockchain’s themselves to change in any way, FIO Addresses work immediately with every token/coin including brand new ones that are created.

Is there any concern/thought about the possibility that FIO addresses could create a secondary naming market, not unlike those surrounding domain names?

Not a concern… definitely in our thoughts. Secondary markets are not a bad thing as they create the ability for the value represented to be exchanged between parties. In fact, FIO Addresses themselves are non-fungible tokens so they are automatically self sovereign and can be traded in a completed decentralized manner.

Delegated Proof of Stake can be seen as a more democratic version of a traditional POS consensus. However, DPOS require more intimate participation from token holders in order to be sure the best delegates are validating transactions. How do Dapix and the FIO Foundation intend to foster commitment required by the community?

Great question… The reality is the more broadly held a token becomes, the greater the portion of holders who have no idea who to vote for as a block producer and, in fact, probably don’t even care to invest the time to think about it. They simply don’t care. The FIO Protocol will enable wallets and exchanges to have FIO tokens that are held by their users in their products proxied to them for voting. Users will be able to change that setting… but if you imagine blockchain becoming fully mainstream, the reality is that most won’t care to do so.

Those entities will be well informed and involved in FIO so they will make knowledgeable votes on block producers. Users, in turn, will mostly vote by deciding which wallets and exchanges they want to use to hold their FIO tokens (although, again, users could choose to vote directly and not proxy their vote to the wallet or exchange).

Furthermore, what measures will be in place to ensure that delegates are acting in the best interest of the community after they have been elected to the position?

If by “delegates” you mean the block producing nodes, they will continually be at risk of being voted out of their position as a block producer. If by delegates you mean the entity to which a vote is proxied, most of those will end up being users proxying their FIO token vote to the wallet or exchange they are using and those entities have a huge interest in ensuring the FIO Protocol works well and can continue to be a trusted decentralized solution.

The post Will the Foundation for Interwallet Operability (FIO) Help Scale Crypto? appeared first on CoinCentral.