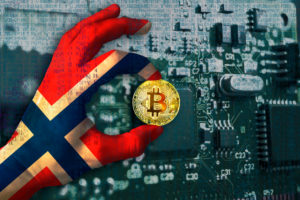 As of January 2019, bitcoin mining in Norway will no longer be supported by the government. This was reported by the largest Norwegian newspaper Aftenposten on 21 November. Specifically, the Bitcoin miners benefited so far from a tax decree, which pushed the price of electricity for the mining companies extremely. By lifting it, the price of electricity increases from the equivalent of about 0.04 euros to 1.70 euros per kilowatt – an increase of 42.5 times. This could mean the death knell for many miners in the Scandinavian country.

It’s not a good week for Norwegian mining companies. The blatant crash of Bitcoin of over 30 percent after months of sideways movement is now followed by the next horror news: Bitcoin Mining will not be subsidized from next year.

It’s not a good week for Norwegian mining companies. The blatant crash of Bitcoin of over 30 percent after months of sideways movement is now followed by the next horror news: Bitcoin Mining will not be subsidized from next year.

powered by finatives
According to calculations by the German bitcoin miner Northern Bitcoin, the average mining price in Norway is about $ 7,700 per bitcoin. The electricity for this will be gained mainly through cheap, renewable energy and a specially tailored to the fjords of Norway water cooling system. As official reason for the end of the promotion, state sources called environmental protection.

The voices to the action
“Norway can not continue to provide tax benefits for such an environmentally harmful form of energy production – and that only to generate bitcoin. That consumes vast amounts of electricity and also emits greenhouse gases “,

“That’s shocking! The framework conditions were changed without any discussion, consultation, let alone dialogue with industry. Since then, Norway has been characterized by high political stability and the reliability of the legal framework. But suddenly the government plays Russian roulette with its credibility.”

But there are also positive voices from the blockchain economy itself. Jon Ramvi, CEO of blockchain consulting firm Blockchangers, commented on the transactions:

“This is a victory for the people of Norway and our natural resources. Less mining in Norway will lower the price of electricity for the people living here and the state-owned companies. This means that instead of Bitcoin miners, local people will benefit from the country’s resources.”

Furthermore, he refers to the true purpose of mining:

The tightrope walk between economy and safety on the one hand and environmental protection on the other, is well known. Norway is not the only player to oppose the miners. It remains to be hoped that future, innovative approaches will be able to manage the balancing act between the two poles.