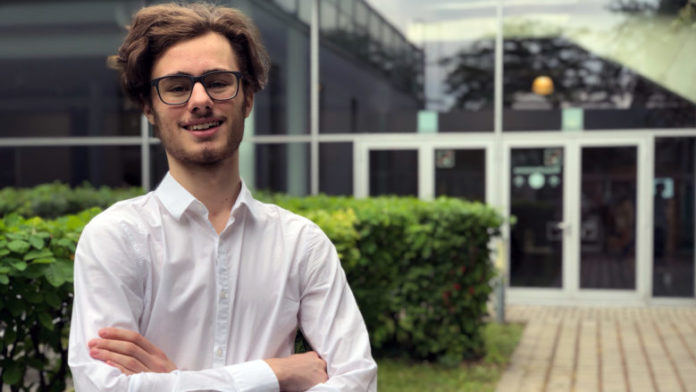 Slowly you can see what the robot arm conjures on paper: It is an artistic portrait of rapper Eminem, which the ABB IRB-120 paints in its own style. His tools are not only brush and acrylic paint, but especially Machine -learning and distributed ledger technologies that turn the industrial robot into an artist. A team led by 19-year-old AI researcher Eric Steinberger has created a very special application for machine-to-machine communication at the Vienna University of Technology. Because the robot can theoretically reorder his paint himself, if it goes out – then paid with the crypto currency IOTA.

From Vienna to Cambridge

Steinberger, who does not finish his oral exam until next week (he only got one in the written Matura), is an exceptional talent. At the age of 15, he began studying mathematics and physics with the help of MIT (Massachusetts Institute of Technology) online courses. “Right from the beginning I put a focus on Artificial Intelligence,” says Steinberger in an interview with Trending Topics. In addition to being a research assistant at the University of Luxembourg, he has been research intern at the Vienna University of Technology since November 2017, where he researches how cryptocurrencies such as IOTA can function in the M2M economy. He is interested in how robots, for example, automatically purchase weather data from weather stations in order to optimize their processes in industrial plants.

“Every sensor in the world, including your cell phone, could be included in this network,” says Steinberger. In speeches – such as at the IOT Forum or at the WeAreDevelopers Conference – the 19-year-old speaks to industry professionals about deep learning, distributed ledger and blockchain technologies. The next step in the career is already in progress: In early October, Steinberger will go to Trinity College in Cambridge – and is thus in the English small town, home to some 1,500 tech companies (including the AI ​​startups Five.AI or Prowler.io) is. “If you really put dedication, work and time into something, then at 19 you can be where you wanted to be a few years before,” says Steinberger.

“IOTA is far from perfect”

With the crypto currency IOTA Steinberger has chosen an exciting as well as hyped research topic. His thesis is that once millions or even billions of devices, robots and sensors depend on the Internet of Things (IoT), there will have to be a way for the machines to pay each other for data and services without needing people. “I’m not a fan of hype. But there is one real problem: it is useful for machines to be able to send information, and in a capitalist society that costs a lot. And that’s where IOTA comes in, “says Steinberger. “Bitcoin is useless to IoT because the more and more transactions there are, the slower the network gets. IOTA, on the other hand, gets faster the more transactions happen on the network. ”

But IOTA (currently with a market capitalization of about $ 4.9 billion) is still far from being a truly decentralized network for M2M transactions. Steinberger’s research would have shown that currently only five to ten transactions per second can be performed, and that is not the decentralized network, because even a “coordinator” of the IOTA Foundation must verify the transactions and not distributed nodes. “IOTA is not what it’s advertised for. But it certainly can become what it promises to be. It has the theoretical basis for this, “says Steinberger. “IOTA is far from perfect. Take things, especially new technologies. It also does not bother stressing, because then only bugs come into the system. “For large companies IOTA is definitely exciting. “Bosch is invested in IOTA. That speaks for itself.”

Blockchain: “Hype will settle down”

The current hype surrounding blockchain technologies and cryptocurrencies has prompted companies around the world to crank up investments in crypto startups ( Trending Topics reported ). From industry to the music world to the energy sector, every industry seems to be affected by the blockchain revolution. But Steinberger relativized. “Certain processes benefit from a decentralized system, others do not. It’s certainly not about replacing the whole world with blockchains. I do not like this hype. To say we have to throw everything else away, because the Blockchain is coming, ‘that does not interest me.’

Rather, Steinberger sees very specific areas of application, such as IoT, where decentralized systems will prevail. “The blockchain will not disappear again, it’s only in the baby phase. The hype will settle down, and the blockchain will be implemented where it’s useful, but not everywhere. ”

Even the young blockchain researcher does not invest in cryptos. “I’m generally not a fan of investing, not even with cryptos. Since you only look at the smartphone, whether the price goes up or down, that’s not my thing. I do not like this gambling attitude. “For his generation, it’s easy to be part of the blockchain revolution because it’s pretty easy to buy coins. But the topic would only rarely deal with people at his age. “The Otto Normal student does not know what that all is.”

Artificial intelligence as a hobbyhorse

The young researcher who will soon pursue his studies in Cambridge, she AI ​​as a way to solve many problems. “Self-driving cars are a good example. These things just do not get tired, do not drink alcohol and thus have a lower error rate than humans. “Like Blockchain, AI would still be at the beginning of its development. “Today, nothing should call Artificial General Intelligence, but I think there is Artificial Intelligence. It was unimaginable for many that a computer can play go or describe pictures in sentences. But computers have been around for years. But being generally better than humans, artificial intelligence is still a long way off. ”

“Nobody put pressure on me”

Steinberger sees his studies abroad with great anticipation and enthusiasm, after all, he has the opportunity to meet in Cambridge some of the leading experts in the field of Artificial Intelligence. The fact that he made it so far in his early years as one of the few Austrians makes him visibly proud. Why did he make it so fast? “I always use to say: Focus is deciding what you do not do.”

The decision to devote himself to artificial intelligence in the field of science was made by Steinberger himself. “My parents are not researchers. But they always let me do what I wanted, that’s where the autonomy comes from. I did not have any mentors either, but I chose a few role models that I liked certain qualities like Ilya Sutskever from OpenAI or Elon Musk, “says the young AI researcher. His teachers at the HTL Spengergasse had always been very supportive, but the deciding factor for his career was himself. “No one has ever pressurized me to do more.”

19-jähriger Wiener Forscher kombiniert Roboter und AI mit der Kryptowährung IOTA was originally published on trendingtopics.at.The IOTA-News Community curates, examines, and summarizes news from external services while producing its own original material. Copyrights from external sources will be credited as they pertain to their corresponding owners. The purpose is to make use of 3rd party content or pictures as either allusion or promotional endorsement of mentioned sites. If you have a claim of copyright infringement with respect to material, please mail to support[at]iota-news.com. IOTA-News.com is a community run website and is NOT affiliated with the IOTA Foundation in any way.

How Stable Is NEO at the Moment?

The crypto market has been critical so far, as most of the gains recorded by the currencies have been reversed...