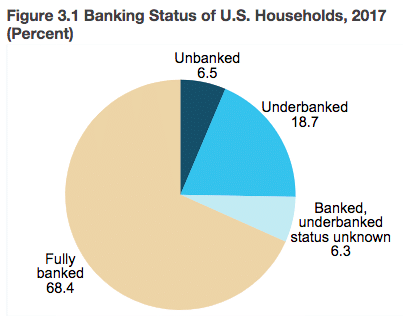 Amazon Go is opening its first New York store this week at Brookfield Place downtown, CNBC reports. The 1,300-square-foot storefront will join the eleven other Amazon Go stores that have already opened around the United States. Unlike many of its other locations, however, this cashier-less storefront will accept cash as one of its payment options.

Soon after launching its first cashless stores, Amazon Go faced criticism that the company was excluding the 8.4 million U.S. households who don’t have access to banking services. This group of people, termed the unbanked, are unable to use the Amazon Go app because of its debit/credit card requirement.

About one-quarter of the U.S. population is either unbanked or underbanked. | Source: FDIC

“We’re in earlier days but it’s an important focus for us and we’ll continue to extend those methods with our stores.”

Several cities are considering passing laws to force stores to accept cash. Massachusetts already has the legislation in place, and Philadelphia created a ban on cashless stores in February. Other major cities are following suit with San Francisco, New York, and Chicago all thinking about similar laws.

While banning cashless stores like Amazon Go may seem like a good idea in the short-term, it’s nonsensical as a long-term solution. The world is moving into the digital space and companies shouldn’t face punishment for innovating in that regard.

Supporting the unbanked is a noble cause, but these cities are approaching the problem in the wrong way. Instead of forcing businesses to accept an antiquated currency, we should help those without bank accounts get access to banking services. Or even better, introduce them to Bitcoin. Serving the unbanked population should be a worldwide goal for Amazon. | Source: The World Bank

It’s been brought up ad nauseam in the blockchain community, but Bitcoin is necessary to keep unbanked individuals relevant in a digital society. If banks aren’t going to provide them with the tools they need to buy goods and services in a cashless society, Bitcoin will.

Amazon should be one of the biggest proponents of bitcoin adoption. Bitcoin enables Amazon Go stores to provide goods to people who don’t have debit or credit cards without having to waste money on store employees who currently need to handle the cash transactions. With the number of stores potentially reaching 3,000 by 2021, Amazon should want to cut costs wherever possible.

.@Amazon Go is being called the grocery store of the future pic.twitter.com/3kxSvWMA1i

Unfortunately, bitcoin transactions aren’t a priority for Amazon nor Amazon Go stores right now. The e-commerce giant has been hesitant to implement cryptocurrency payments, but rival Rakuten is taking a more progressive approach. The Japanese online retailer has been accepting bitcoin payments since 2015 and is set to launch a cryptocurrency exchange and wallet in June.

On the other hand, Amazon doesn’t provide any way to pay with cryptocurrency. Your only options for crypto transactions are third-party providers like Moon which utilizes Bitcoin’s Lightning Network via Chrome plugin.

Supporting bitcoin payments in Amazon’s Go locations would not only demonstrate the company’s desire to serve the unbanked but would also promote their branding as one of the most forward-thinking companies in the world – a title that’s slowly slipping away towards competitors Alibaba and Rakuten.