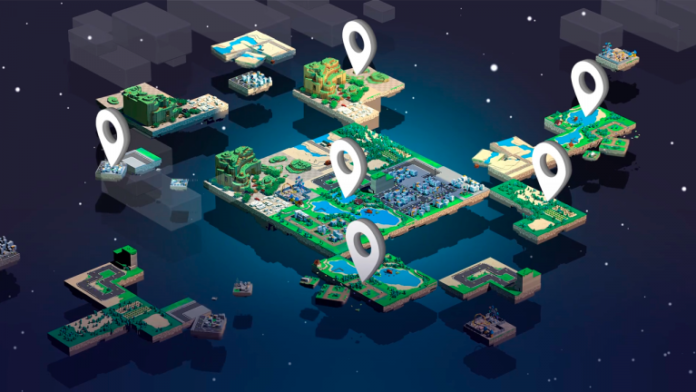 A great number of Non-fungible tokens (NFTs) have been selling on various marketplaces this year creating tens of thousands of dollars in NFT sales. One particular platform called The Sandbox has been selling virtual land parcels for thousands of dollars worth of ether. The Sandbox is a virtual world that lets players create and own blockchain-backed virtual items in the metaverse built on the Ethereum network. On October 18, Sandbox revealed two 6×6 estates had been sold for 210 ether ($76,931) or 28x the original price.

In the future, digital currencies will be an integral part of the online world individuals call the “Metaverse.” The Metaverse is essentially a persistent virtual space converged with virtual reality. Current blockchain applications allow people to not only create 3D virtual spaces and items, but also own them in an immutable fashion as well.

At the end of July, news.Bitcoin.com reviewed the virtual world dubbed “Decentraland,” and observed all that has been built since it was invoked over four years ago. However, there’s another virtual ecosystem being constructed called The Sandbox. The player-created online world has been the fifth-largest seller in terms of NFT trade volume, according to today’s nonfungible.com data.

The Sandbox blockchain-based game was created by the startup TSB Gaming, a subsidiary of the firm Animoca Brands. Data shows that the game has seen an aggregate total of 42,420 sales worth $2.2 million to-date. During the last 30 days, $555k worth of sales were recorded by nonfungible.com.

Basically The Sandbox game leverages a voxel editor so users can create 3D assets and develop on land parcels that can be purchased with the project’s native token SAND. The assets participants create can also be sold in the Sandbox marketplace for SAND as well. On Sunday, the project’s official Twitter account revealed two 6×6 estates had been sold for 210 ETH worth over $76k.

The cofounder of The Sandbox, Sébastien Borget, said the two 6×6 estates sold were a record sale on the platform. The 6×6 estates were sold next to the virtual Atari theme park region. The established video game maker Atari joined forces with the blockchain game back in March, and detailed a number of Atari favorites will be made available in the 3D Sandbox world.

Additionally, Atari detailed that Sandbox visitors will be able to obtain Atari-issued in-game assets. The firm also announced atarichain.com and the Atari Token (ATRI) offering last week, but it’s uncertain if ATRI will be available to use in the Sandbox game after launch.

Sandbox is betting big on the blockchain-based virtual ecosystem, but it remains to be seen how popular the platform will become. Decentraland’s popularity has waned since the virtual world’s initial launch, and the app has dropped to the seventh-most used NFT-based ether app in terms of NFT trade volume.

Most of the virtual worlds online like Altspace-VR lack participants and it may take a while for blockchain-based VR attempts to catch on. Besides Roblox and Minecraft, hundreds of VR and voxel-based worlds have seen lackluster adoption and only a small amount of users. However, Sandbox is adding well known partners to the equation and it may give the platform a boost.

Sandbox’s parent firm Animoca Brands recently announced a partnership with Cloudco Entertainment, the owner, content producer, and global distributor of the Care Bears. In addition to Atari and Cloudco, other well known firms like Square Enix, Shaun the Sheep, and Rollercoaster Tycoon World have also partnered with Sandbox.